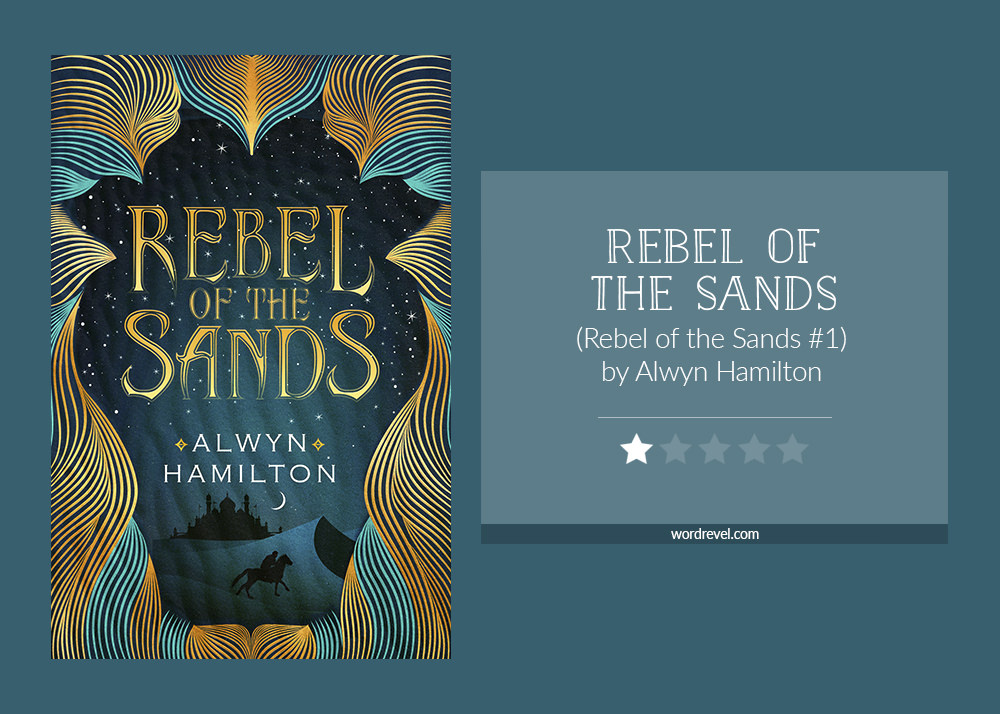 Rebel of the Sands (Rebel of the Sands #1) by Alwyn Hamilton • contains 358 pages • published February 4, 2016 by Faber & Faber • classified as Fantasy, Young Adult • obtained through purchase • read as paperback • shelve on Goodreads

This phenomenal novel is the first in a trilogy packed with shooting contests, train robberies, festivals under the stars, powerful Djinni magic and an electrifying love story.

“Tell me that and we’ll go. Right now. Save ourselves and leave this place to burn. Tell me that’s how you want your story to go and we’ll write it straight across the sand.”

Dustwalk is Amani’s home. The desert sand is in her bones. But she wants to escape. More than a want. A need.

Then a foreigner with no name turns up to save her life, and with him the chance to run. But to where? The desert plains are full of danger. Sand and blood are swirling, and the Sultan’s enemies are on the rise.

The first 200 pages were not written well. I was bored and felt growing discomfort with the mangled Middle Eastern culture this fantasy book was premised on. At least the next 150 odd pages picked up a little in terms of plot and also storytelling, so I didn’t end up thoroughly hating Rebel of the Sands. Still, this book has so many problems, I’m relieved I didn’t order the sequels before finishing this one first.

Not Much Respect for Original Cultures

What was the most upsetting about Rebel of the Sands was the way Western tropes and Middle Eastern folklore were combined. For most of the book, the strength of Amani lay in her sharpshooting skills. Give her a gun and she’ll survive the desert/wilderness. This means her heroics were premised on the Western influences, which allowed her to overcome her circumstances — the oppression of her family and their society. This oppression was a reflection of negative perceptions of the Middle East that weren’t even well-researched.

For example, View Spoiler »Amani’s father had abused her mother for years. Their family and neighbours turned a blind eye. When her mother retaliated and shot him, she was hanged. Amani’s uncle became her guardian and eventually planned to marry her himself, rather than let someone else marry her. Of course, that played into the permissiveness in Islam of men marrying more than one woman without considering that close relatives are not allowed to marry one another. « Hide Spoiler

Yes, Rebel of the Sands is a work of fantasy, so the religions go by other names. You could argue that accuracy therefore doesn’t matter. However, the parallels are evident as Amani’s people pray several times a day, waking up before dawn for the first prayer. Technically, alcohol isn’t encouraged, even if widely drunk. They believe in djinn. Although, the portrayal of them is based more on pop culture than anything else. With such obvious parallels, more care should’ve been given to the portrayal of religions in Rebel of the Sands.

Beyond the cultural insensitivity, the writing style was very obfuscating. In a bid to show, rather than tell, there was a lot of imagery throughout the book but few propelled it forward. I’d read a page and end up wondering, “So what?” Did the plot advance? No. Did I learn more about the characters or the setting? No. Did these build atmosphere? No. In essence, more than half of the book was unnecessary.

Then there was the strange logic of the Demidjin. They supposedly couldn’t lie. What shifted, depending on context was whether they had to speak what they knew to be true or what was true, even if they couldn’t know.

One Demidjin wondered if two boys she’d met might be her brothers. She couldn’t say that they were, so the conclusion was that they couldn’t be. Then later, she said something, without knowing if it was true in order to make it true. The concept of truth wasn’t explored well enough to establish a logical system. Rather, it was bent to become a convenient plot device.

As for the connection between Amani and Jin (also what’s up with that name?), there was none, and yet she was willing to follow him to the ends of the earth. There was little trust between the two and yet View Spoiler »at the first opportunity, they ended up kissing « Hide Spoiler. There was no spark that led to it. Their relationship continued to be perfunctory without any development of emotional intimacy.

You could say that disconnect stemmed from Amani’s upbringing. She’d lost her mother, after which she lived with her uncle and aunt. Her aunt hated her with a passion. Her cousins followed suit. She did, however, have a best friend. Tamid was willing to give up everything for her.

Tamid protected her with all he had. What did he get for it? View Spoiler »He got shot in the legs because of Amani’s selfish ambitions. She didn’t even try to save him. When she did think back on his sacrifice, she asked Jin what might have become of him. By all accounts, most likely killed. Also, Tamid was the only person with disability in Rebel of the Sands. That he should be so dispensable didn’t sit right with me. If you don’t understand why that’s a problem, here’s an interview on disability and fiction. « Hide Spoiler So yeah, there’s that — the reasons Amani is a most unsympathetic protagonist not worth rooting for.