Disclosure: I received a review copy of Renegades from Pansing Books, a regional distributor, in exchange for an honest review. This does not affect my opinion of the book or the content of my review. 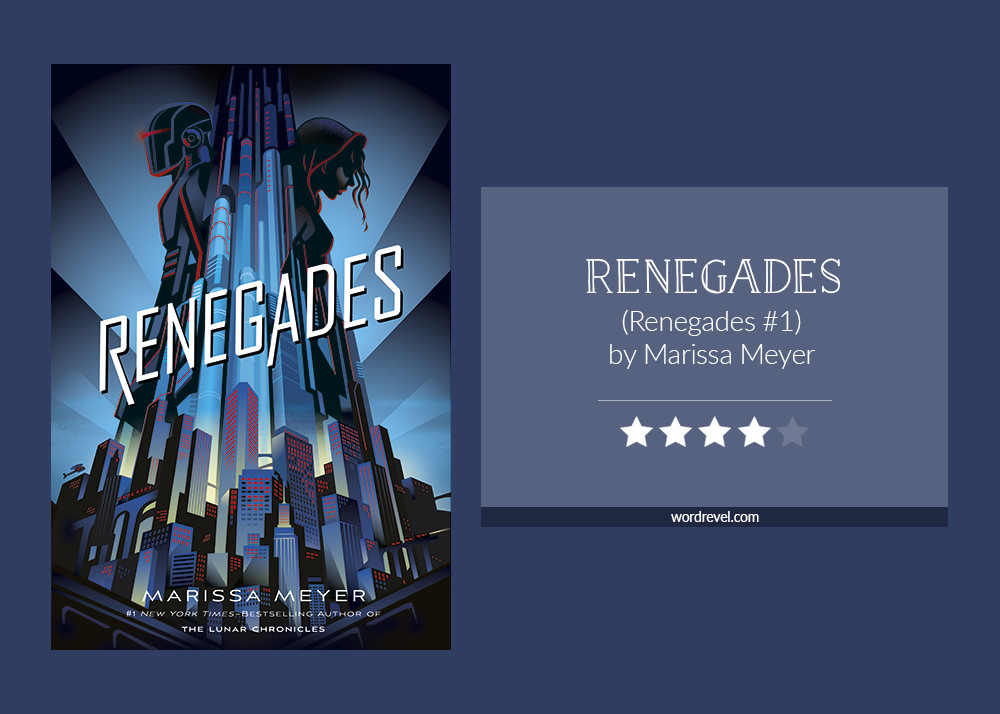 The Renegades are a syndicate of prodigies—humans with extraordinary abilities—who emerged from the ruins of a crumbled society and established peace and order where chaos reigned. As champions of justice, they remain a symbol of hope and courage to everyone... except the villains they once overthrew.

Nova has a reason to hate the Renegades, and she is on a mission for vengeance. As she gets closer to her target, she meets Adrian, a Renegade boy who believes in justice—and in Nova. But Nova's allegiance is to the villains who have the power to end them both.

Explorations of good versus evil that are firmly cemented in the grey zone often give rise to the best works of fiction. They also are the types of books I live for! So when I learnt that Marissa Meyer decided to venture there with her latest series, of course I was intrigued. Renegades has much to offer and despite some flaws that made me raise an eyebrow, is a promising start to the series.

Renegades had some action befitting of superhero stories but above all else, it served as an introduction. It was filled with backstories and history. I think those who prefer their world building to be set in stone before conflicts truly unfold will appreciate Marissa Meyer’s approach. I enjoyed it for the situational irony that arose. Third person omniscient narrations aren’t exactly the default in YA novels at the moment, so this was a great change of pace.

Speaking of pace, Renegades was considerably slow. Even though it’s a thick book, action took a backseat. There were foreshadowings of things to come, though. Allegiances were called into question throughout the book. With that, Renegades set up lots of possibilities and potential for excitement in the sequel. The way things unfolded, this duology was probably designed to read like one massive story arc, rather than two smaller arcs meant to fit together.

Good versus evil, heroes versus villains aren’t only explored through the enmity between the Renegades and Anarchists. Characters too came to points of philosophising about their existence and purpose.

Although, you’d think anyone with great powers of observation wouldn’t make the same mistake twice. Oddly, prodigies from both camps didn’t learn much from errors that proved to be fatal. That made their capacity to protect or seek revenge seem a tad bit less impressive. So yeah, I hope the characters grow to be less naïve because that did grate on me.

I also found it a bit suspect that View Spoiler »the Anarchists were mainly made up of five characters. It’s clear that many died, and a number at the hands of the Renegades too. I could appreciate their thirst for revenge but wondered how they could even begin to think they had any chance to bring down the Renegades. Both sides had superpowers, and the Anarchists were vastly outnumbered and up against highly developed technology. « Hide Spoiler There’s a lot depending on the sequel to answer those questions.

Confusions aside, what I also liked about Renegades was the diverse cast. Diversity was part of their identities without overshadowing their individualities. Nova was an Italian-Filipina, Adrian had two adoptive fathers, and Oscar had a bone disease that required him to walk with a cane.