Earlier this month #WeNeedDiverseBooks took Twitter by storm and even became a trending topic. For those who haven’t heard about it or aren’t aware of what this hashtag is all about, check out the official site. 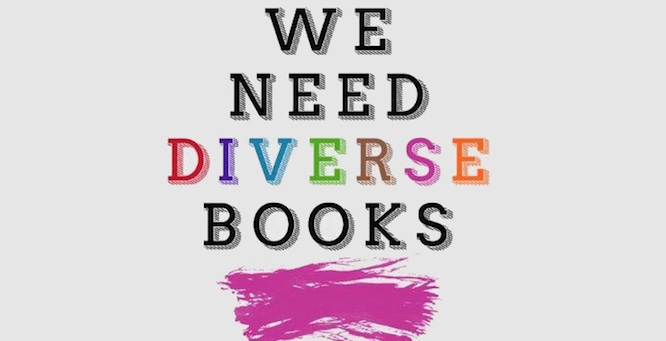 Personally, I am very heartened by this movement and am glad that it is raising awareness about the need to include minority groups in literature as well. Minority writers and books about minority characters should be included in canons and should become part of regular literature consumption for both majority and minority groups. Majority groups can only gain empathy and minority groups will be given a greater voice. Diversity in books is beneficial for all but there are obstacles.

Publishers ultimately are driven by profit because they are businesses that need to sustain the people working in the industry. It’s no wonder then that books are published according to demand. If the demand for diverse books is low, then so will be the supply. This is why I like the campaign. It is a concerted effort to gain support and raise the demand for diverse books. People are speaking up on social media about why they want diverse books and showing everyone who they are and how they deviate from the characters portrayed in mainstream YA literature.

What’s great too is the acknowledgement that diversity can mean a lot of things, and the effort to embrace that. Diversity means diversity in ethnicity, culture, religion, gender, sexuality, disability, etc. At this point, I also feel the need to say that diversity includes both the minority and the majority. The call for diversity is not a call to undermine the majority. It is a call to also include the minority. Books about straight white males, written by straight white males need to continue to thrive but they need to thrive alongside books about Latinos, women, Muslims, immigrants, and the likes as well. Literature needs to give a voice to everyone, not just the dominant people in society.

I know what it’s like to be the minority, and it is true that the minority often doesn’t have a voice. Every time I fill up a form that requires me to indicate my race, I have to tick “Other” because I am of multiracial descent. I could pick Eurasian if it happens to be an option but if I’m strict about it, it’s not entirely accurate. It depends on how many generations I count though, so for simplicity’s sake, I usually tell people I’m biracial, or accept the label Eurasian. It’s easier than to explain my ethnic heritage. Yet what does Eurasian mean? Even within the local Eurasian community, I would be the minority. Most here claim Dutch or Portuguese origins. I claim neither. Then again, I’m not even local. I am not a citizen because my family emigrated from my home country. Yet even in my home country, I am the minority because I am part Asian. No matter where I go, I will always be part of the Other. In Asia, I’m the European. In Europe, I’m the Asian.

Ethnicity is something most people don’t think about until they become the minority. Same goes for religion, gender, and disability. Unless you’re blind, you’ll hardly notice the need for Braille or audible traffic light signals. Unless there is no temple for you to worship in, you’ll hardly notice the need for mosques for others to worship in. Unless you don’t understand the language around you, you will not grasp how difficult it is for your neighbour to communicate. This is why I say, the call for diversity is not an attack on the majority but rather, it is a call to for the minority to also be heard.

My only plea is that those who write and publish diverse books do so with discernment. Books about stereotypical caricatures don’t help promote diversity but rather undermine it by perpetuating ignorance. Diverse books need to be accurate in their representation of minority groups because only then will there be a value in diverse books. Diversity should be about representing everyone and giving everyone a voice that they can believe in.

What do you think about the #WeNeedDiverseBooks Campaign? Do you have a story to share about being part of a minority?