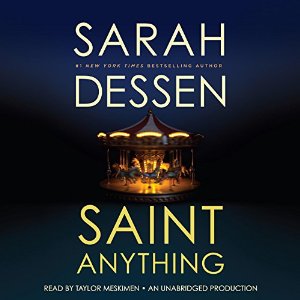 Saint Anything by Sarah Dessen • read by Taylor Meskimen for 12 hours 41 minutes • published May 5, 2015 by Listening Library • classified as Contemporary, Young Adult • obtained through Overdrive • read as audiobook • shelve on Goodreads

Peyton, Sydney's charismatic older brother, has always been the star of the family, receiving the lion's share of their parents' attention and lately, concern. When Peyton's increasingly reckless behavior culminates in an accident, a drunk driving conviction, and a jail sentence, Sydney is cast adrift, searching for her place in the family and the world. When everyone else is so worried about Peyton, is she the only one concerned about the victim of the accident?

Enter the Chathams, a warm, chaotic family who run a pizza parlor, play bluegrass on weekends, and pitch in to care for their mother, who has multiple sclerosis. Here Sydney experiences unquestioning acceptance. And here she meets Mac, gentle, watchful, and protective, who makes Sydney feel seen — really seen — for the first time.

Saint Anything wasn’t a book I had meant to read. I figured that the three unread Dessen books that I own should take priority and I don’t even know when I’ll get down to reading any of them. Perhaps I’ll read one later this year since I did like this latest release of hers. The reason I decided to listen to the audiobook of Saint Anything was that it happened to be available to me via Overdrive, so I decided to borrow it on a whim.

No family is perfect and every family has its flaws. Sydney’s family was an example of one with a lot of flaws. Sydney’s brother, Peyton, was the centre of her parents’ universe, even when his reckless drunk driving led to an accident that crippled another boy. What was messed up was that Sydney more than anyone else was ridden with guilt. Her father spiralled into workaholism while her mother remained in absolute denial that her precious son wasn’t the victim.

With those dynamics the family, things only could get worse. The way they got worse gripped me because things weren’t straightforward, yet almost at every moment I expected something to happen. Sydney’s circumstances were set up for disaster. In some ways, I found it frustrating that nobody saw the signs. On the other, that’s usually how things tend to go. When we’re so wrapped up in ourselves, we don’t notice what’s happening around us.

The arrival of the Chathams family added some reprieve from Sydney’s family life and added a great parallel storyline that eventually became very much intertwined with. I loved the whirlwind of a friend Layla was to Sydney who came to treat her like her own sister, watching out for her whenever she could. Then there was Mac, Layla’s brother. He too added colour to Saint Anything and balanced the negativity that Peyton’s friend Ames brought to Sydney’s life.

Ames was quite a character. He readily agreed to Peyton’s request to be there for Sydney while Peyton was in jail. Yet there was something unsettling about him. I had a bad feeling towards him right from the start without quite knowing why. It was as though I had met him in really life and formed my first impression of him and nothing could make me change my mind that he was beyond shady.

The characterizations of the people in Saint Anything were so varied and came across as distinct individuals, even though there were quite a number of them to keep track of. They were complex and each had their own motivations that brought the story to life. Since I kept hearing from others that this isn’t even one of Sarah Dessen’s best books, I’m curious how this skill of hers translated into her previous books.

Despite the ominous manner in which the plot unfolded, there also was sweetness to Saint Anything. Even the meaning behind the title showed hope amidst the problems that Sydney faced. It made me smile and reminded me that sometimes the littlest things turn out to be the most significant to us.

While the narration was a little slow for my liking, I did enjoy listening to Taylor Meskimen. I fixed the speed by listening with at least a 1.5x acceleration. That worked without distorting her voice too much. Her narration was relatable and I could totally imagine her being Sydney, bringing me through her memories as she told me what happened. Her voice was mellow yet always expressed heightened emotions, which fit the mood of Saint Anything very well.