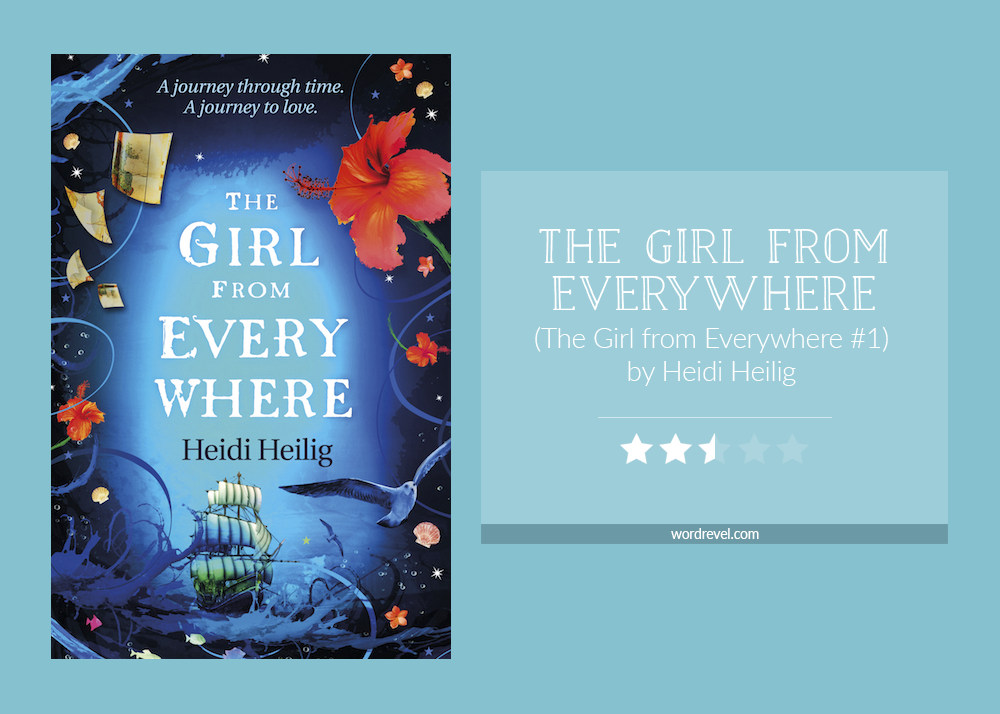 Sixteen-year-old Nix Song is a time-traveller. She, her father and their crew of time refugees travel the world aboard The Temptation, a glorious pirate ship stuffed with treasures both typical and mythical. Old maps allow Nix and her father to navigate not just to distant lands, but distant times - although a map will only take you somewhere once. And Nix's father is only interested in one time, and one place: Honolulu 1868. A time before Nix was born, and her mother was alive. Something that puts Nix's existence rather dangerously in question...

Nix has grown used to her father's obsession, but only because she's convinced it can't work. But then a map falls into her father's lap that changes everything. And when Nix refuses to help, her father threatens to maroon Kashmir, her only friend (and perhaps, only love) in a time where Nix will never be able to find him. And if Nix has learned one thing, it's that losing the person you love is a torment that no one can withstand. Nix must work out what she wants, who she is, and where she really belongs before time runs out on her forever.

Time travel in books is my weakness. I used to actively seek them out as a kid. Nowadays reading about such stories feels like visiting old friends. Sadly, The Girl from Everywhere didn’t quite have enough of it. The setting of The Girl from Everywhere was predominantly Honolulu 1884. There were glimpses of India, New York and China from various eras but not a lot happened in these places. Being stuck in Hawaii for so long gave rise to a slower moving plot than I had anticipated.

The concept of time travel was hardly explained as well. View Spoiler »All I got was follow the right map and believe that you’ll arrive in the year and place it demarcates. Why this worked wasn’t answered. « Hide Spoiler

At Least Hawaii Was Beautiful

Docking in Hawaii was a welcome consolation for the lack of time travel. The tropical setting was vivid and definitely a change of scenery from cities in which most contemporary and historical fiction tend to take place. If The Girl from Everywhere ever gets optioned as a film or TV show, I’d watch it just for the view and atmosphere. Even just with words, The Girl from Everywhere conveyed these beautifully.

Secondary characters tend to not be as developed as main characters. In the case of Kashmir though, The Girl from Everywhere had an exceedingly strong secondary character. He had sass, was witty and all-around entertaining. In a way, he provided comic relief during times the plot moved along a little slower. He kept Nix on her toes and for that, I absolutely loved him.

Kashmir had a lot of charm but he and Nix couldn’t carry the story alone. Slate annoyed me because the portrayal of his obsessions with getting the perfect map of Honolulu 1868 made him a very two-dimensional character. He was a non-existent father to Nix and really, there was little development to his character. Blake was so bland, I thought him rather superfluous.

Magical Inspiration from Legends and Myths

The Girl from Everywhere benefitted from the incorporation of legends and myths. These were from around the globe, from very different cultures and yet their collision in The Girl from Everywhere gave rise to creative details. Some of them were deliberately altered to fit the story but on the whole, they invoked a great sense of wonder.

About a third through The Girl from Everywhere, Nix had an exchange about the meaning of her name. While nix could mean nothing in several languages, Nix pointed out that the reverse, xin means happy.

欣 (xīn) in Mandarin does mean happy. That might be all well and good, except in 1880s Hawaii the Chinese didn’t conventionally speak Mandarin. Three-quarters of the Chinese immigrants were Cantonese-speaking. The transliteration for 欣 is san. The remaining one-quarter was Hakka-speaking. Xin is a close approximation of how they pronounce 欣. However, there also was a reference to the number five (五) as ‘wu’. In Mandarin that’s wǔ but for Hakka, this doesn’t even remotely apply. The Hakka pronunciation of 五 is much closer to ‘ng’.

This is why I conclude that neither Cantonese nor Hakka were the Chinese languages used in the context of The Girl from Everywhere. Instead it seems that the author adopted Mandarin as the lingua franca of the Chinese in 1884 Hawaii. That doesn’t fit with the historical demography of Chinese immigrants to the island.

Guzheng was misspelled as “guhzeng” and that sprung out at me since the word was italicised to denote its foreign origin. I hesitate to refer to it as a typographical error because the same misspelling appeared twice in the book. There were no signs of a deliberate choice of unconventional spelling. There was no reason to believe that the instrument in question was a modified version special to The Girl from Everywhere.

Another notable term used was “huʻakai po” which doesn’t coincide with the conventional spelling either. The Hawaiian folklore refers to night marchers as huakaʻi po. The placing of the ʻokina (ʻ) might not seem significant but in tandem with the linguistic errors, it adds up.

Diversity is great and wonderful but if a culture is foreign, the onus is on the author to do thorough research. If it’s a culture familiar to the author, all the more reason to ensure an accurate portrayal of a culture which is unknown to most readers.