Disclaimer: This review contains spoilers for The Inexplicable Logic of My Life, as I dissect specific parts that didn’t sit well with me. 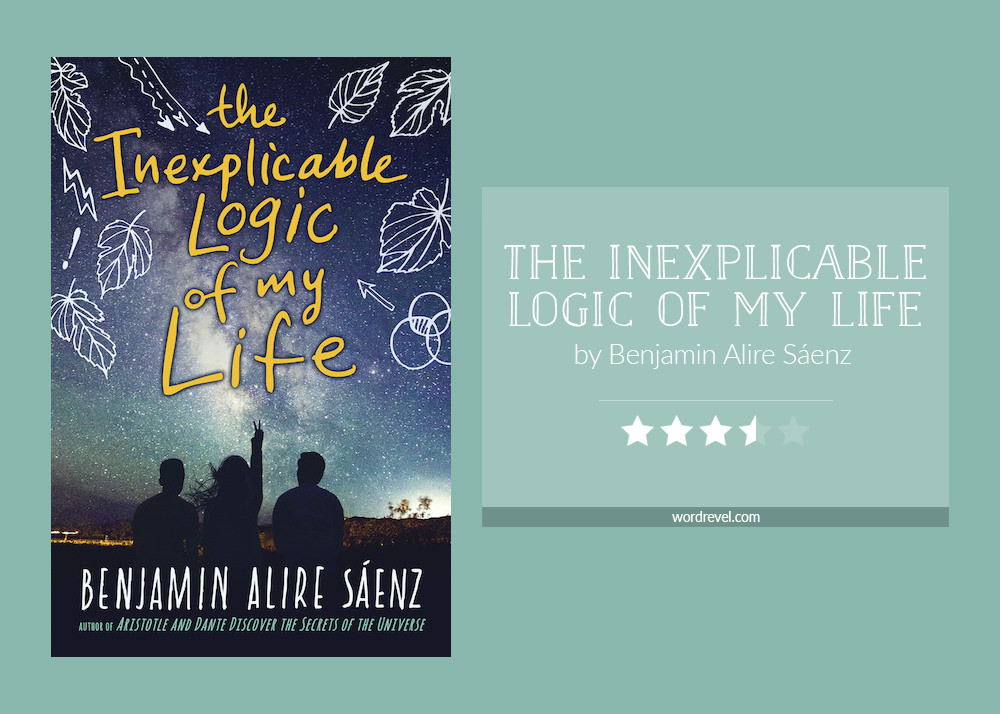 Sal used to know his place with his adoptive gay father, their loving Mexican American family, and his best friend, Samantha. But it’s senior year, and suddenly Sal is throwing punches, questioning everything, and realizing he no longer knows himself. If Sal’s not who he thought he was, who is he?

This humor-infused, warmly humane look at universal questions of belonging is a triumph.

Parts that made my Heart Sing

After reading and enjoying Aristotle and Dante Discover the Secrets of the Universe last year, I couldn’t wait for The Inexplicable Logic of My Life to be released. On several counts, Sáenz’s book lived up to my expectations. The prose, though simple, once again was stellar! I love introspective characters, and after reading two books from Sáenz, I’m convinced that he’s a master at writing them. And while single parents are ubiquitous in YA fiction, Sal had an adoptive father who was gay, thereby expanding representation for non-traditional families.

Grappling with Life and Death

I loved the three-way platonic friendship Sal, Sam, and Fito had going. They supported each other through difficult times in their lives. Some people might say that it was too much to have each one of them lose a loved one within such a short span of time. I disagree, because the year my grandmother passed away, three friends of mine also lost family members dear to them within a couple of months of one another. It was a difficult time, but knowing each other’s pain helped in comforting each other. Seeing that in The Inexplicable Logic of My Life was a sad reminder for me, but I’m noting this in my review nonetheless, as an anecdote that that’s not such a far-fetched plot development.

What also struck me about The Inexplicable Logic of My Life was the exploration of race vs. ethnicity, and nature vs. nurture. Salvatore was a white boy adopted by a Mexican. Racially, he was white. Culturally, he was raised in a Mexican family. He spoke Spanish better than Sam, who was born and raised a Mexican. He ate more Mexican food at home than Sam, who mostly had takeaway food. That dynamic was an interesting one to me, as it demonstrated how ambiguous ethnicity can be.

However, despite the multitude of pros that should’ve made me love The Inexplicable Logic of My Life, I had some problems with this book that put quite a damper on my enjoyment. I found that the interactions among the characters were uncomfortably misogynistic, undermining some of Sam’s strengths with, oh, she’s good with this and that for a girl. Yes, her two best friends were guys, and that narrative is painfully reflective of reality, but what troubled me was that she encouraged it.

Then there was the unfounded violent streak that Sal displayed. At times, he was provoked, but even beyond this occasions, he had repressed anger for no apparent reason. He did worry whether it might be in his nature because his birth father had been abusive, but there was no resolution for it. His violence existed, he knew it was wrong, and yet nothing was seriously done to address this.

Worst of all, there was no accountability for attempted date rape. There were no consequences whatsoever. Instead, it was swept under the rug.

On the night that Sam called Sal to get her, he was terrified for her about what might have happened. Yet, nobody thought to alert their school or the authorities. Sal received a dressing down from her mother for being irresponsible and that was the only time anyone even mentioned that she could’ve been raped. It was that singular instance that the word “raped” was mentioned in-text, and it came with zero sympathy towards the victim.

Later on, when Sal found Sam talking to Eddie, the guy who had attempted to rape her, Sal was indignant. He wanted to protect his best friend, and had the urge to punch Eddie for the hurt he had caused. What did Sam do? She got mad at Sal because Eddie supposedly had been apologising to her. This entire situation undermined the gravity of rape, even if the attempt had been unsuccessful.