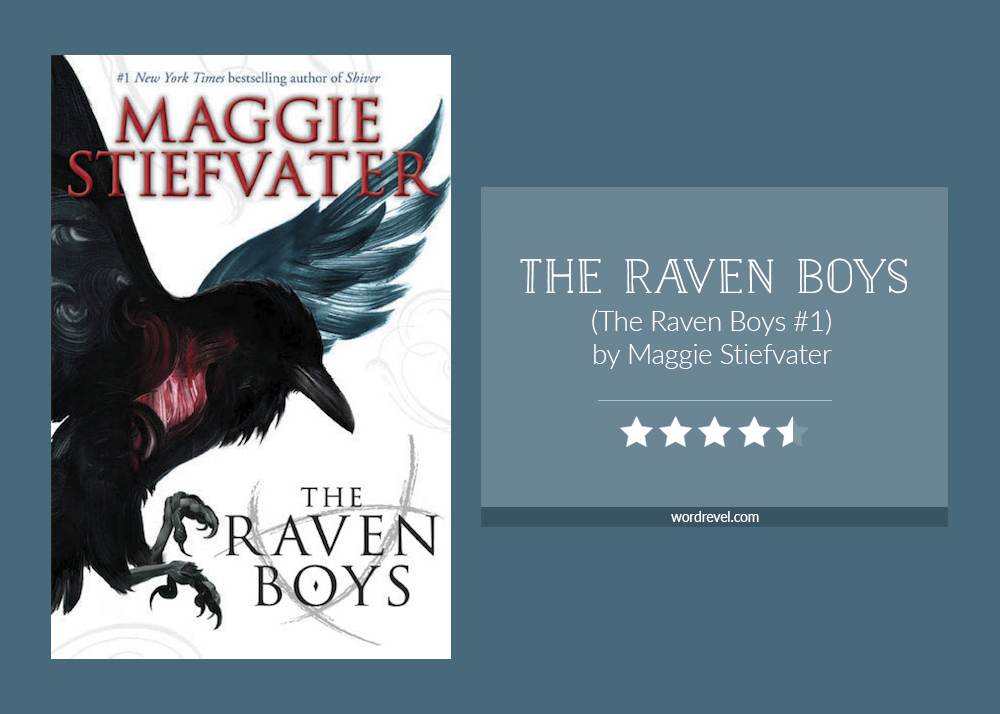 Every year, Blue Sargent stands next to her clairvoyant mother as the soon-to-be dead walk past. Blue herself never sees them—not until this year, when a boy emerges from the dark and speaks directly to her. His name is Gansey, and Blue soon discovers that he is a rich student at Aglionby, the local private school. Blue has a policy of staying away from Aglionby boys. Known as Raven Boys, they can only mean trouble.

But Gansey is different. He has it all—family money, good looks, devoted friends—but he’s looking for much more. He is on a quest that has encompassed three other Raven Boys: Adam, the scholarship student who resents all the privilege around him; Ronan, the fierce soul who ranges from anger to despair; and Noah, the taciturn watcher of the four, who notices many things but says very little.

For as long as she can remember, Blue has been told by her psychic family that she will kill her true love. She never thought this would be a problem. But now, as her life becomes caught up in the strange and sinister world of the Raven Boys, she’s not so sure anymore.

It’s amazing how much perspectives can shift upon a re-read. When I first picked up The Raven Boys nearly two years ago, I listened to the audiobook. I loved Will Patton’s narration but had a few reservations about the book itself. Recently, I sat down with the hardcover edition, post-its and pencil in hand, determined to annotate as I revisited The Raven Boys. There were so many things I newly discovered, I grew to love it a whole lot more.

“Blue Sargent had forgotten how many times she’d been told that she would kill her true love.”

This is one of the most memorable and impactful opening lines I’ve come across. I could read it over and over again without ever tiring of it. There’re so many questions, so many implications and so many promises in one single sentence.

For the most part, Stiefvater delivered a beautiful and impactful book. I just wish the urgency of this prediction had given rise to more tension. Then again, this is only the first of four books, so perhaps I’m too impatient to see these things unfold.

What most drew me to the raven boys and Blue was their loyalty to each other. Their relationships with one another were intense. They would do almost anything for one another, even when they disagreed. Especially when they disagreed, actually, they meant well and truly wanted what’s best for the people they cared for.

Beautiful prose tends to suck me right in, particularly when it’s used to draw attention to details. I think that’s why I came to appreciate The Raven Boys more when I re-read it. I already knew what was going to happen, so I paid more attention to the words and expressions.

“Pages and pages were devoted to these ripped and scissored excerpts, and there was an undeniable tactile pleasure to browsing. Blue ran her fingers over the varied surfaces. Creamy, thick artist paper with spidery serif. Slick, utilitarian white stock with an artless modern type. Ragged-edged newspaper in a brittle shade of yellow.”

The description I quoted was about a journal that Blue was flipping through. It conveyed the sensory experience with such care, I almost felt as though I was walking in Blue’s footsteps when I read that. In fact, I felt that way most of the time, regardless of which character was in focus.

What I also noticed upon my re-read was that The Raven Boys foreshadowed many events in the later books. I’ve yet to read The Raven King but this observation applies to the next two books, so I expect this for the conclusion as well.

As I flipped back and forth between the pages, I noted parallels, subtext, and connotations that were artfully woven into this novel. It speaks for genius when an author can portray singular events, no matter the degree of (in)significance, while remaining rooted in the grand narrative.

Beyond their Friendship Bubble

I liked that readers were given holistic glimpses into the lives of the main characters. Their families were also integral to The Raven Boys. Learning about the families helped me better understand what made the characters tick. Plus, I couldn’t help but develop a soft spot for Blue’s family. In the absence of a father unknown to her, she lived with her mother and her mother’s best friends. Their quirky demeanours could be so endearing, even if they sometimes hid darker secrets.

Despite the mystery that The Raven Boys was shrouded in, there were some very hilarious moments. I smirked at how obtuse Gansey could be and the quick wit of Blue. Noah, Adam and Ronan too added some comic relief at times.

“The boy opened his mouth to protest, and her thought came back to her all in a rush. ‘Most girls, when they’re interested in a guy, will sit with them for free.’

To his credit, the Aglionby boy didn’t speak right away. Instead, he thought for a moment and he said, without heat, ‘You said you were working for a living. I thought it’d be rude to not take that into account. I’m sorry you’re insulted. I see where you’re coming from now, but I feel it’s a little unfair that you’re not doing the same for me.’”