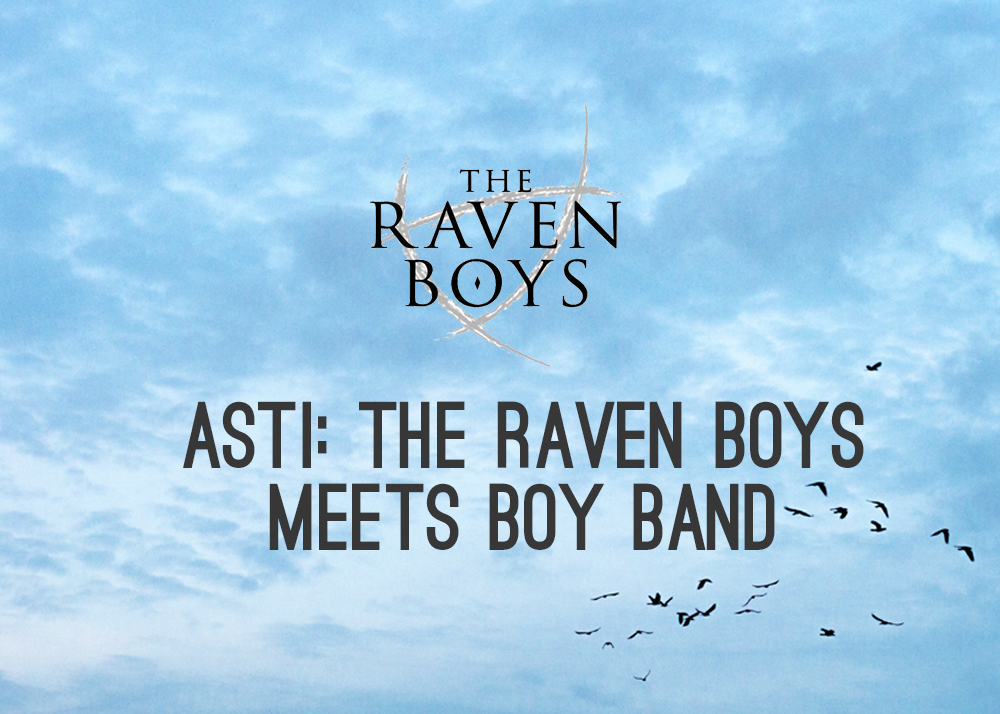 Asti has a penchant for coming up with new features on Oh, the Books! I think it’s a testament to her overflowing creativity. It’s no wonder then that she turned the raven boys upside down and cast them in a boy band. As you’ll see, she had splendid reasons.

If you can’t get enough of Asti’s wit and creativity, be sure to follow her on Twitter and Instagram. Don’t worry, even though she relishes being our resident evil mastermind (especially in the Bookish Games), she gladly takes lost souls (like me two years ago) under her wing.

When Josephine asked me if I was interested in writing a guest post about The Raven Boys, I was a little nervous. I’ve only actually read the first book in the series so my knowledge of these boys is quite limited, and though I gave that book five glorious stars I am definitely not on the same level of fangirl as many other bloggers. What post could I write with my limited knowledge that won’t make me look like a complete fraud?

And then it hit me: why not just have fun with it? Why not take a step away from the series and just look at The Raven Boys in a silly way?

I believe The Raven Boys have everything needed to become a hugely successful boy band in this day and age. From the name, to the looks, to the fangirls – they have it all.

Don’t believe me? Let’s break it down.

The boys already have a name, obviously. They are The Raven Boys. Now, that may not sound like the most original name ever, but who cares? If a band can get uber popular with a name like “The Beatles”, I think The Raven Boys will work just fine. (Who cares about names anyways? It’s all about the looks, and The Raven Boys deliver on that front, right?)

The third thing needed for a boy band, that these boys definitely already have, are unlimited numbers of fangirls. And if you haven’t had fangirls squealing about this book all over your Twitter, then I want to know what rock you’re living under so I can join you!

Every other day Sana and Crini are tweeting their fangirl squeals about the boys in this series. The fangirls are loud and proud, and seemingly inescapable. (You can’t blame them for their enthusiasm though, especially when it convinces someone like me, a former-Stiefvater avoider, to read this series!)

Oh wait, should I mention their vocal abilities? Do we actually know if they can sing? I don’t remember. But who cares?! Isn’t that what auto-tune is for? We’ll let them get away with anything as long as they are pretty…

And that’s it! I hope you had as much fun reading this post as I did writing it. Let me know what you think: do you think The Raven Boys would make a successful boy band? And, if so, come up with some song titles for their debut album! I think it would be fun to make a collection ;)