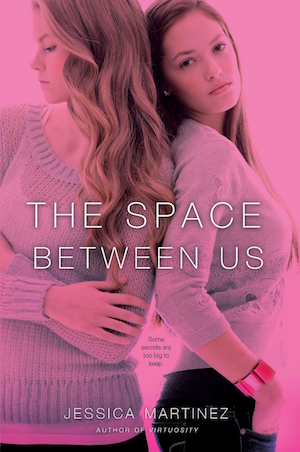 Amelia is used to being upstaged by her charismatic younger sister, Charly. She doesn’t mind, mostly, that it always falls to her to cover for Charly’s crazy, impulsive antics. But one night, Charly’s thoughtlessness goes way too far, and she lands both sisters in serious trouble.

Amelia’s not sure she can forgive Charly this time, and not sure she wants to… but forgiveness is beside the point. Because Charly is also hiding a terrible secret, and the truth just might tear them apart forever.

The Premise of The Space Between Us

Things spiral out of control though when Charly doesn’t come home one night. Amelia worries for the safety of her sister when the next morning she realizes that her sister is not in school. When Amelia is punished alongside Charly and misses out on the biggest hockey match of the year as well as prom, it is no wonder that she is upset with Charly.

As if that isn’t enough, the consequences are compounded when the sisters end up moving across the continent to Canada, as far away from home as possible. At this point, Amelia is beyond forgiving Charly, who can no longer confide her darkest secret in Amelia.

With all these twists and turns, I had no idea what to expect from The Space Between Us. All I was building upon was that it’s about two sisters who are very close until an incident tears them apart. That was pretty much based on the synopsis that accompanies it. As it is, this story offers so much more and I am glad that the pink overload on the cover did not turn me off.

Firstly, I liked that the foundation of The Space Between Us was the relationship between sisters. Most of the time I end up reading books about friends, and if siblings are featured, they’re not necessarily central to the story that unfolds. Here, their lives are so closely intertwined, it becomes too close for comfort for both Amelia and Charly.

What came a bit as a surprise to me was that their father turned out to be a pastor. While religion is largely peripheral to the story, it offers a fair bit of reasons and explanations as to the choices that are made. In that sense then, the setting up of the background and history of the family is very solid and lends to the believability, if you will, of The Space Between Us.

As the elder sibling, Amelia is the serious one. She is highly driven and ambitious, setting her sights on Columbia University. A straight-A student with a wider range of extracurriculars sets her in huge contrast to her younger sister, Charly, who is much more concerned with playing around. Charly does have one passion though and that the stage. She loves to sing and to act, although her grandmother does not support her at all in that area.

The contrast between these two makes their relationship all the more interesting because nobody knows what to expect next. Charly especially does the craziest things, to the point that I would cringe or just burst out laughing to myself. Despite being larger than life, I could totally imagine Charly as a person in real life. Both Amelia and Charly are relatable which definitely helps to draw in the reader and also made me care about their plights.

Like I said, The Space Between Us came with a myriad of surprises. Even though their mother was Canadian, the two of them had never been to Canada. Their wonderment towards snow amused me but it also shows Martinez’s attention to detail, from the seemingly insignificant moments to the important gut-wrenching ones.

Martinez extends the same finesse towards her other characters in the book. The girls’ aunt, Bree, who agrees to take care of them is vastly different from whom they first expected her to be. She is not the upright model Christian that their grandmother would have picked out but she does step up to the task of taking care of the girls, and Charly in particular. Bree fits in well, escalating the tension between the sisters on some occasions, and diffusing it at others.

I Actually Liked the Romance

When it comes to the romance department, Ezra also is a welcome addition as Amelia’s romantic interest. He is a fairly complex character, and it takes some patience to get to know him. Thankfully readers are not left hanging at the end, wondering what all that brooding in his head is about. For those who hate love triangles, bear with it. It’s not so much about the drama but about untangling confusions and dealing with emotions that, let’s face it, are difficult to deal with.

Amelia doesn’t know how to feel towards Taylor, Ezra’s ex-girlfriend. Taylor is still torn up. And Ezra, well, he know what he wants but he is mature enough to not want to hurt either Amelia or Ezra.

I think The Space Between Us is a refreshingly balanced read that deals with tough issues View Spoiler »surrounding teenage pregnancy « Hide Spoiler. In it readers recognize that life doesn’t stop and decisions must be made. Options are clearly laid out with their implications explored as well.

Antagonizing emotions are brought to the page and dealt with as well. When it comes to the revelation of Charly’s secret though, perhaps more weight could have been given to it. Had that been done, this novel would have become an indisputable favourite of mine.