Disclaimer: There are spoilers for the first book in the duology, The Program. If you have not read it yet, you might want to check out that review instead. This review also contains spoilers for The Treatment. 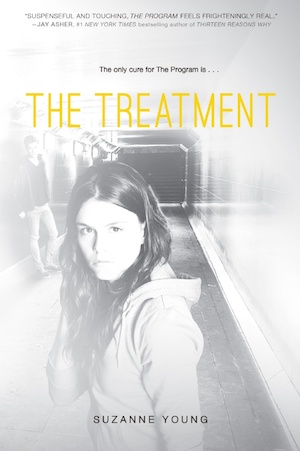 Can Sloane and James survive the lies and secrets surrounding them, or will The Program claim them in the end? Find out in this sequel to The Program, which Publishers Weekly called “chilling and suspenseful.”

How do you stop an epidemic?

Sloane and James are on the run after barely surviving the suicide epidemic and The Program. But they’re not out of danger. Huge pieces of their memories are still missing, and although Sloane and James have found their way back to each other, The Program isn’t ready to let them go.

Escaping with a group of troubled rebels, Sloane and James will have to figure out who they can trust, and how to take down The Program. But for as far as they’ve come, there’s still a lot Sloane and James can’t remember. The key to unlocking their past lies with the Treatment—a pill that can bring back forgotten memories, but at a high cost. And there’s only one dose.

Ultimately when the stakes are at their highest, can Sloane and James survive the many lies and secrets surrounding them, or will The Program claim them in the end?

I can hardly describe the overwhelming disappointment that The Treatment brought me. I know I wasn’t a fan of The Program but I did like it for the concept. Still, I had problems with it because of the many unanswered questions The Program left me with. I pegged them as cliffhangers, so I expected The Treatment answer them, particularly the ones about the suicide epidemic that wrought this society. Did I get those answers? Hardly. The big issues were glossed over so much, I was mad at the end of the book. To me, The Treatment hardly contributed to the duology. It would’ve been better left unread.

For the most part, nothing much happened. The Treatment was broken down into three parts. Part I came across as filler material. Nothing important happened until the last page, when finally(!) something happened to move along the plot. Seriously, the entire first part only continued where The Program left off without introducing compelling plot twists. Sloane and James were on the run until they met the rebels. That was it.

Too Many Unanswered Questions

What happened to The Program and the suicide epidemic in that time? I don’t know because these things were cast aside so that the relationship between Sloane and James could take centre-stage together with James’ jealousy towards Realm. As if the fact that Realm and Sloane kissed in The Program was so much more important than their missing memories and the horrors they went through while locked up in the facilities of The Program.

Part II was a let-down because I held onto the hope that this book was going somewhere, especially when the all important question that bugged me surfaced.

“What caused the epidemic?” I ask him. The thought of finally knowing the answer makes my body electric in anticipation.

This should have gotten the ball rolling. Funnily (though I’m not laughing), it didn’t. The answer to that question in a nutshell: We will never know. What a waste of my time reading up to that point. There was no update either on the progress of any cures for this depression that led to so many suicides. At least some answers did surface about how The Program came into being. Though even that part left me largely unconvinced.

The only other noteworthy events of Part II were the discovery that Realm still had a thing for Sloane and the return to The Program. Because a love triangle is totally what that The Treatment needed to keep things interesting.

Oh, there Were Rebels?

You would think that the point of having rebels was to create tension and conflict. There was tension alright but more among Sloane, James and Realm than anyone else. Until James and Realm became friends, that is. Sloane still had too many issues with Realm, whom she admitted to loving in Part II after ingesting a pill that would make her tell the truth. Yet on every other occasion she claimed she hated him. Even better, she kissed Realm and James caught them. James ended up forgiving her anyway.

Fast-forward, The Program was dissolved, investigations were underway and patients were released into the care of doctors who practiced traditional treatments of depression, like talking things out.

Whoa, hang on! How did we skip ahead to this? you ask. Beats me. An undercover reporter leaked the atrocities of The Program and that was pretty much it.

That resolution made zero sense. All along there was such a tight rein on the media. And despite this massive control, the downfall of The Program ended up being the media?! This has plot holes written all over the book.

No grand rebellion or anything of that sort. No climax that caused The Program to blow up. Such an anti-climatic ending, considering the hold The Program had on their society.

I mean, come on! Sloane’s own mother reported Sloane, so that she would be taken into The Program. Something drastic had to happen for The Program to crumble. Nothing drastic did happen, so I was left hanging.

To make the whole book even more irrelevant, while both Sloane and James had been interviewed for that article that apparently busted The Program, nothing they said to the reporter was printed. No mention of them at all. So much for headlining the news thanks to an amber alert that had been raised when they went missing.

The Annoyance that the Romance Was

In case anyone cared about the happy ending of Sloane and James, the final chapter served to tell readers about their lives six months after these two were free from The Program.

I kiss him; it’s playful and easy—we have time now. There’s no one after us. We’re free.

Oh yes, so very free. Because freedom mattered oh so much to their relationship. To be clear, it did not matter. While these two love birds were hiding among the rebels (who numbered laughably little), they had time to make out and lament the fact that they couldn’t have sex because James left his condoms behind at their last hiding place. Like time had an impact on their relationship (scoffs).

The relationship between Sloane and James was one of the main things that irked me throughout the book. Every now and then there were parts about how much Sloane loved James or what it was about James that Sloane loved. I couldn’t care less.

On the up side, their romance did have a redeeming quality. They managed to love each other despite all the memories they had lost to Programme. That at least demonstrated strength that can be found in love. That’s the one true ray of hope I found contained within the pages of The Treatment.

Summing Up My Sentiments

To sum up here’s this note I made when updating my reading progress on Goodreads. Turns out it neatly sums up my sentiments towards the entire book:

Just as I thought things were actually getting good, they get bad again. Ugh. *rolls eyes and groans* I don’t care about who loves whom. It’s annoying me so much because it’s getting in the way of the whole point of this book: the suicide epidemic, The Program, The Treatment, the cure to it all, and freedom. Growl.