Disclaimer: There are mild spoilers for the first book in the series, The Final Empire. If you have not read it yet, you might want to check out that review instead. 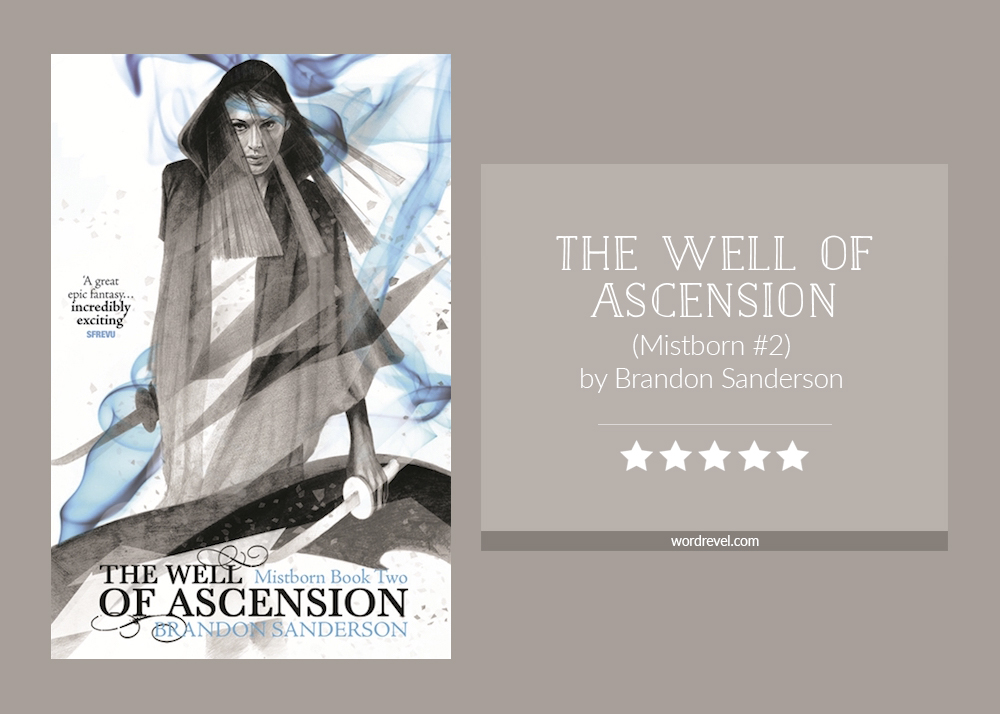 The Dark Lord is dead, and now a new world can be built. The acclaimed epic commercial fantasy published for the first time in the UK.

The impossible has happened. The Lord Ruler is dead has been vanquished. But so too is Kelsier the man who masterminded the triumph. The awesome task of rebuilding the world has been left to his protege Vin; a one-time street urchin, now the most powerful Mistborn in the land.

Worryingly for her Vin has become the focus of a new religion, a development that leaves her intensely uneasy. More worryingly still the mists have become unpredictable since the Lord Ruler died and a strage vaprous entity is stalking Vin.

As the siege of Luthadel intensifies the ancient legend of the Well of Ascension offers the only glimmer of hope. But no-one knows where it is or what it can do...

The Well of Ascension was an amazing sequel! It carried on with the rich detail that The Final Empire introduced. I loved learning even more about Scadrial and advancing my understanding of Allomancy and Feruchemy.

Admittedly, it took me some time to overcome the mental inertia to pick up The Well of Ascension proper. At 763 pages, it was even more massive than the first book in the Mistborn series. That made it even more intimidating. Once I was into the third chapter though, I was so deeply caught up in it, I couldn’t put it down anymore.

The world Brandon Sanderson continued to build was exceedingly intricate. Everything from the culture, religion, politics to the natural order were deliberately woven together. These details were so densely packed, I had to take my time to soak up as much as possible of The Well of Ascension. That’s what I’ve come to adore about the Mistborn series — it requires full intellectual and emotional investment. Any moment spent reading, was time spent in a completely different world.

My favourite aspects of the world building were politics and religion. Amidst the fiction, I found a lot of theories that academics philosophise over. As with The Final Empire, The Well of Ascension made me think about political and religious frameworks. These questions also bridged over to epistemological musings on memory, in light of Sazed’s feruchemy.

Reading The Well of Ascension, I couldn’t shake the occasional feeling of drag. As much as it advanced the plot significantly, a lot of the time was marred with uncertainty as they waited for something to happen. That’s how wars go — you don’t know who will strike first. In the meantime, the involved parties seek to strike deals.

To add to the apparent stalemate, there were the incessant displays of insecurities from Elend and Vin. Initially, they were still figuring out what they meant to each other but it got on my nerves after some time. They had little reason to doubt each other but doubt they did, constantly. Besides their romantic hiccups, I adored The Well of Ascension.