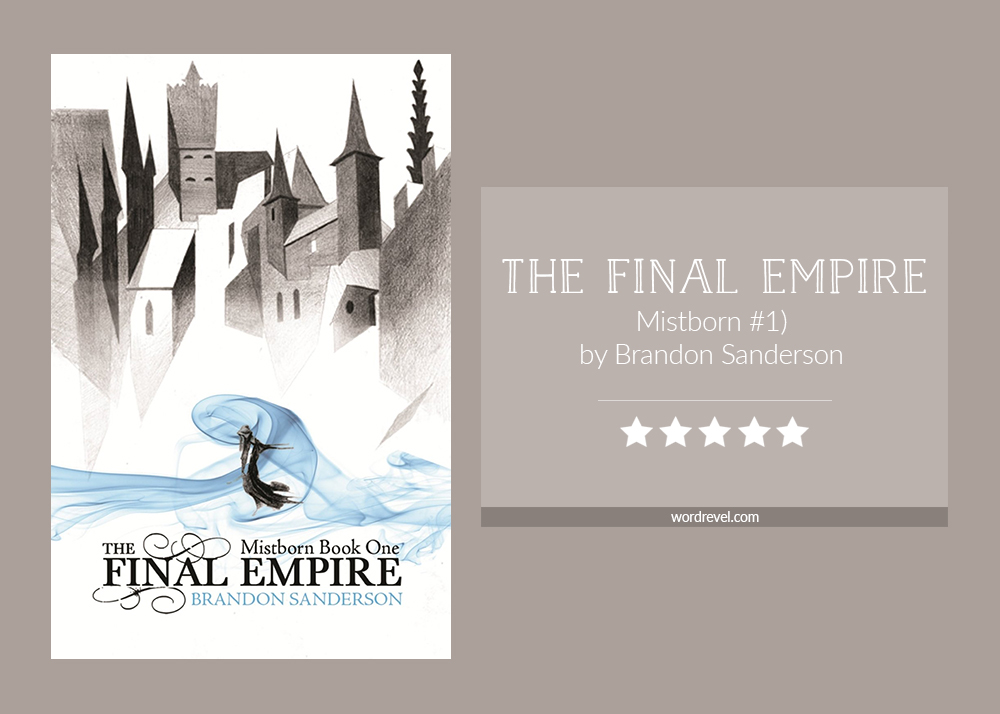 For a thousand years the ash fell and no flowers bloomed.
For a thousand years the Skaa slaved in misery and lived in fear while the Lord Ruler reigned with absolute power and ultimate terror, a divinely invincible leader. Hope is long lost, until a terribly scarred, heart-broken half-Skaa in the depths of the most hellish prison and discovered he has the powers of a Mistborn. A brilliant thief and natural leader, Kelsier will turn his talents to the ultimate caper: one with the Lord Ruler himself as the mark.

Only he’s not just planning the greatest heist in history, he’s plotting the overthrow of a divine despot.

Kelsier recruited the underworld’s elite, the smartest and most trustworthy allomancers, each of whom shares one of his many powers, and all of whom relish a high-stakes challenge. But even with the best criminal crew ever assembled, Kel’s plan looks like a long shot, until luck brings a ragged girl named Vin into his life. Like him, she’s a half-Skaa orphan, but she’s lived a much harsher life. Vin has learned to expect betrayal from everyone she meets, and gotten it. She will have to learn to trust, if Kel is to help her master powers of which she never dreamed.

If I could only use one word to review The Final Empire, I would pick brilliant! Indeed, it is a brilliant book. The world building was impeccable and the laws of nature in this world were very exacting. What set it apart was the impact of metals and how they could be controlled through Allomancy and Feruchemy. These two systems had such logic and were so consistent that by the end of the book, I instinctively knew the outcomes of manipulating various metals.

This nature was woven incredibly well into the story. It was remarkable how all these factors came together in this epic fantasy novel. I loved how much depth the main characters as well as supporting characters portrayed. Each one of them existed for a reason and even the most insignificant characters made a difference to The Final Empire. Though there are over 600 pages, I didn’t feel like any words were wasted.

The chapters that weren’t filled with action contained the most vivid information on the history, culture and politics. Every single page offered a full immersion into the setting and I was fascinated. I particularly enjoyed the theological discussions of the religious orders. Even though the context of these cultures were fictional, the thought processes were rooted in reality. This in turn engaged me on an intellectual level all while keeping me entertained.

Much Love for the Characters

It’s no wonder then that my favourite character in this first instalment was Sazed. I did love Vin and Kelsier too but Sazed captured my quiet adoration. So much knowledge and wisdom were embedded into his character and these naturally overflowed as well. He was a surprising force to be reckoned — so unassuming, yet indispensable.

Above all, the core characters had the fiercest loyalty to one another. Their group all around was made up of amazing people. It was easy to care about them as a result. My heart ached through their trials and losses, while their triumphs made me smile and feel incredible warmth within.

Slow But Worth It

The plot built up slowly as the world building took precedence. Since I’m used to reading more contemporary fiction, it took some time to get used to reading a book which afforded a more leisurely pace before diving into the action.

In the end, waiting, learning and understanding as the crescendo mounted to the most heartbreaking twists was beyond worth it. I absolutely loved every moment — the quiet withdrawn ones as well as the ones that crashed and shattered my heart. Rarely do I find myself so invested in a book as I did with The Final Empire.