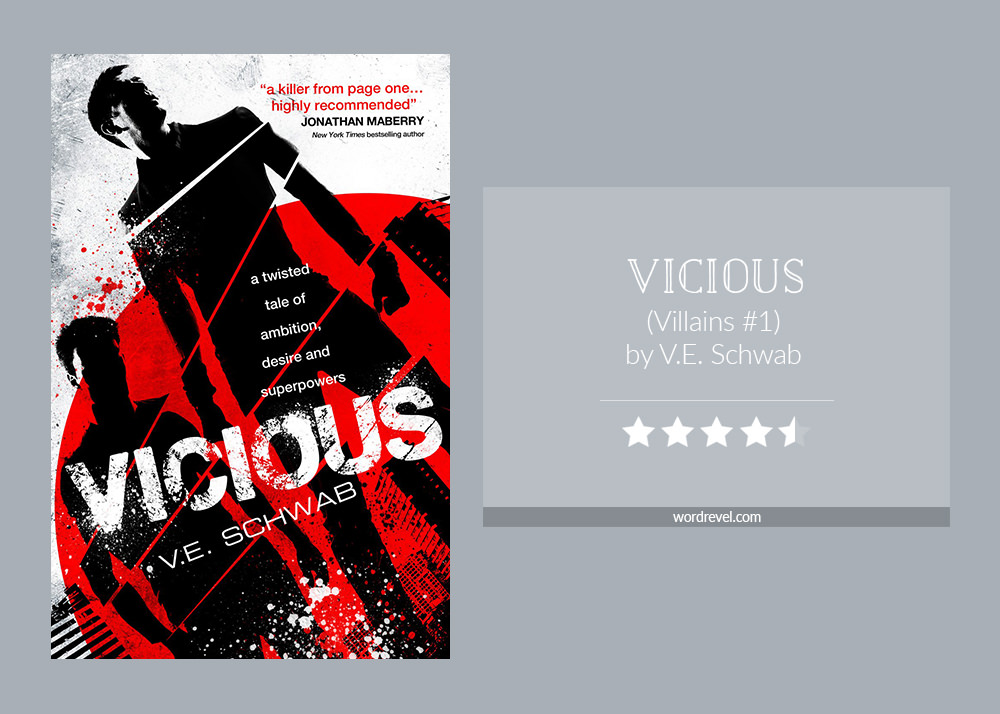 Victor and Eli started out as college roommates—brilliant, arrogant, lonely boys who recognized the same sharpness and ambition in each other. In their senior year, a shared research interest in adrenaline, near-death experiences, and seemingly supernatural events reveals an intriguing possibility: that under the right conditions, someone could develop extraordinary abilities. But when their thesis moves from the academic to the experimental, things go horribly wrong.

Ten years later, Victor breaks out of prison, determined to catch up to his old friend (now foe), aided by a young girl whose reserved nature obscures a stunning ability. Meanwhile, Eli is on a mission to eradicate every other super-powered person that he can find—aside from his sidekick, an enigmatic woman with an unbreakable will. Armed with terrible power on both sides, driven by the memory of betrayal and loss, the archnemeses have set a course for revenge—but who will be left alive at the end?

Going into books blind, particularly books like Vicious, can be infinitely thrilling. You enter unexplored land and everything is new. You don’t follow the tracks paved by expectations built upon the reading experiences of others. The cover states that it’s “a twisted tale of ambition, desire and superpowers”. It’s very correct in that description. That’s your starting point if you’re up for a thrill. If that’s you, then go on, pick up the book, read it and return to my review later to share your excitement. Now, if you’d rather know what you’re getting yourself into, read on.

The structure of Vicious is such that it alternates between the past and the more recent past leading up to the present. Generally I’m not a fan of these approaches. It usually pulls me out of the story. I find it difficult to stay immersed. This time round it didn’t bother me as much as it usually does. Vicious in fact benefitted from the alternating time frames. Everything was woven together very well, indicating that every moment, however insignificant has the potential for a major impact on the future.

Superheroes of a Different Calibre

Compounding my list of dislikes was the theme of superheroes. I’m not one to reach for such books. Occasionally I do watch superhero movies and am mildly entertained but they’re very rarely my choice to watch. I watch because someone I’m going to the movies with picked it. Yet I must confess, I am so glad to find a book on superheroes in Vicious that I thoroughly enjoyed!

What I liked about Vicious was that action and violence weren’t at the forefront. Intellect trumped all. Gaining superpowers was an outcome of a very precise though ambiguous measure which Victor and Eli researched in college. Coupled with greed, power and ambition, it’s expected that things would spiral out of control. Of course they did! At which point the questions arose: who is a hero? Who is a villain?

Twisted Madness that is Vicious

Madness is what science fiction is made of. It’s in fiction that anything is possible. In Vicious a lot was possible. At the same time there was restraint. There were rules of nature that remained consistent. Sure, the rules of nature were extraordinary which in turn begot madness. Just read the opening scene: you’ll find a grave digging Eli with a girl who should be as dead as those buried beneath them. Wait till you find out why they’re so intent on unearthing a particular body! It’s twisted and not even the worst of it.

Vicious lives up to its title in a manner that boggled my mind. The whole time I read I was on the edge of my seat. It’s inventive and smart in a way that challenges the reader. I like challenge and I’m glad I didn’t know this book contains so many elements I don’t usually care for because then I wouldn’t have come to read Vicious at all and that would’ve been a pity.