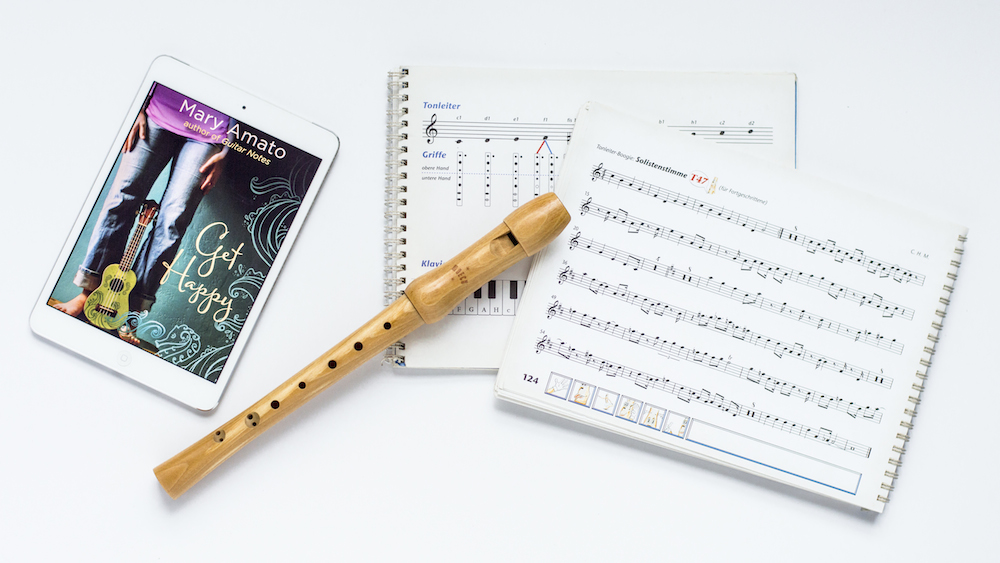 My choice musical instrument at the age of nine: a baroque recorder

Wishing for a Musical Instrument

When I read Get Happy by Mary Amato, the one thing that sprung out at me was Minerva’s desire for an ukulele. The book starts off with her birthday and her extreme disappointment when she didn’t receive an ukulele. I could relate because when I was younger, all I wanted was a recorder.

Though I thought Minerva’s response is kinda bratty since she turns 16 and still sulks away. I was 8 when I asked my parents for a recorder but details. What matters is the common desire for a musical instrument.

Laying Hands on the Musical Instrument

Eventually Minerva did manag to obtain an ukulele. She had been eyeing a particular one at her local music shop. The joy that she felt was unmistakable. She had been excited about that fateful day, that she practically expected all-round cheer and a huge congratulations of sorts.

I remember the day I received my recorder. I expected I’d get a cheap plastic one. But no. The winter I was 9 my family visited my father’s hometown. He and my grandmother brought me to their local music shop. They explained to the shop keeper what they were looking for.

The shop keeper knew exactly what I should get. She looked through boxes marked with Moeck, a traditional German manufacturer of recorders, and pulled out two models to pick from. That wonderful day I walked out of the music shop with the most beautiful wooden baroque recorder that the tiny little me had ever laid eyes on. I was so elated, I was dancing on clouds.

What I loved about Minerva is that she so badly wanted to play the ukulele, she taught herself the chords. She would practice on a make-shift ukulele that she constructed, so she would be prepared for the day she would own such a musical instrument.

Self-teaching is something that I feel is too often overlooked when it comes to musical instruments. Well, unless it’s the guitar. But for the most part, books hardly tell stories about characters teaching themselves how to play a musical instrument.

Minerva had her heart set on writing music and eventually performing with her ukulele. Her plans were to join a band, so an ukulele would be a perfect musical instrument to fit in.

Of course, I didn’t plan to join a band with my recorder. I spent a year teaching myself, learning all that I could. Then in fifth grade, I attended a grammar school that had a classical orchestra divided into three sections, A, B and C. The C orchestra was for the fifth to sixth/seventh grades. There recorders were allowed, even though recorders aren’t supposedly part of classical orchestras.

Curious if I could make it with what I had taught myself, I spoke to the conductor and they said they were willing to help me along because I didn’t have a musical theory background. My skills though were up to par and so I got to play classical music on my humble baroque recorder. Too bad that only lasted a year before my family moved and I ended up in the most boring music class.

Today I hardly play the recorder anymore. I’ve gotten so busy over the years and filled my life with so many other hobbies, I guess my recorder lost its charm. Although, when I pulled it out to photograph it, I tried playing a few of the songs from my music book. I’m glad to report that I still remember how to play.

Another reason I mostly abandoned the recorder is that I spent more time over the years teaching myself how to play the piano. I also spent a few years learning how to play the drums, which I found a lot more exciting. I’ve still got the beats down but I haven’t had the chance to touch a drum set in seven years.

In any case, I still love music and there’s a draw to playing music solely for myself. I don’t have anyone to please but myself and I’m not chasing any certificates. I just wish I had more time because I feel very much inclined to pick up the flute.

What is your relationship to music? Have you ever taught yourself to play a musical instrument?