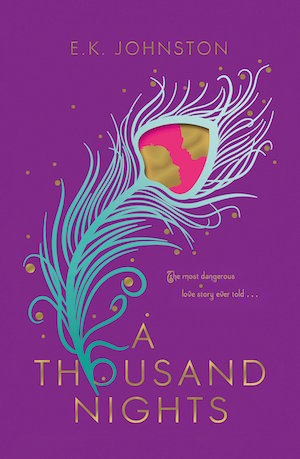 When Lo-Melkhiin - a formidable king - arrives at her desert home, she knows that he will take her beautiful sister for a wife. Desperate to save her sister from certain death, she makes the ultimate sacrifice - leaving home and family behind to live with a fearful man.

But it seems that a strange magic flows between her and Lo-Melkhiin, and night after night, she survives. Finding power in storytelling, the words she speaks are given strange life of their own. Little things, at first: a dress from home, a vision of her sister. But she dreams of bigger, more terrible magic: power enough to save a king... if only she can stop her heart from falling for a monster.

A Thousand Nights is a magical book. The prose is exceedingly beautiful. If literary fiction were to bridge over to the young adult segment, this book would be a stellar example of the genre. In some ways, I think that if readers were to expect a slow story, magnificent in words over a fast-paced one, then the reviews wouldn’t have come to be as mixed as they are now.

I like that the book is a very loose retelling of One Thousand and One Nights. Instead of trying to present Scheherazade 2.0, A Thousand Nights brought to live an independent protagonist. In fact, A Thousand Nights incorporated a lot of originality which allowed it to stand on its own as a separate work.

My favourite aspect of A Thousand Nights was the mysticism. A lot of respect was given to the setting through the portrayal of pre-Islamic beliefs. Rites and prayers were crucial to the lives of the people. The commitment to the gods was evident in A Thousand Nights. At the same time, the underlying presence of spirits was artfully weaved into the book.

Given what I learnt in my anthropology courses, relations mattered a great deal to many tribes of ancient times up until today even, so all these nameless people came off as pretty authentic, despite my wish to know their names.

This leads to the question, do we really have to know someone’s name to know someone? The characters contained such depth, I wasn’t even concerned with their names. I could still tell them apart. Besides, a name is but a label. Yes, it forms part of an identity, surely. However, what do we become when we take on a pseudonym or change our names? We don’t become lesser people. Our characters remain intact.

With that, I’d say, give A Thousand Nights a chance. I know many have compared it to The Wrath and the Dawn and declared their preference for this other retelling of One Thousand and One Nights. I did enjoy both but A Thousand Nights impressed me more. It had more substance. The subtexts in A Thousand Nights didn’t make it an easy read but it did make it a satisfying one. It might not have swept me off my feet, yet I developed a quiet liking for it in my heart. Not everything has to be a whirlwind to touch us.