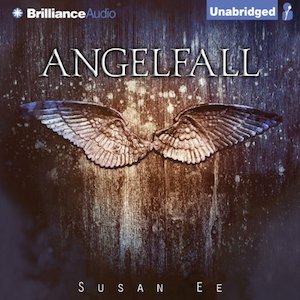 It's been six weeks since angels of the apocalypse descended to demolish the modern world. Street gangs rule the day while fear and superstition rule the night. When warrior angels fly away with a helpless little girl, her seventeen-year-old sister Penryn will do anything to get her back.

Anything, including making a deal with an enemy angel.

Raffe is a warrior who lies broken and wingless on the street. After eons of fighting his own battles, he finds himself being rescued from a desperate situation by a half-starved teenage girl.

Traveling through a dark and twisted Northern California, they have only each other to rely on for survival. Together, they journey toward the angels' stronghold in San Francisco where she'll risk everything to rescue her sister and he'll put himself at the mercy of his greatest enemies for the chance to be made whole again.

Truth be told, I decided to pick up Angelfall because I could get the audiobook for free via Kindle Unlimited. Angelfall wasn’t actually on my TBR list but I was in search for an audiobook and practically all my friends on Goodreads who read the book liked it. Only one person was disappointed, so the odds were in my favour. This also meant that since I hadn’t planned on reading it, I had zero expectations.

On Darkness and Gore

If there is one thing to be said about Angelfall is that it is dark. There were also a couple of graphic scenes, so if anyone is averse to violence in books, I wouldn’t recommend reading this. As long as you can stomach some gore though, Angelfall does deliver.

Angelfall is about angels. Duh. But titles can sometimes be very misleading, so yes, angels appear in this books and are central to the story. The only thing is that their portrayal was somewhat unconventional for me. Usually when I read books about angels, the setting was in heaven. Here, the setting was earth. Humans and angels were portrayed on the same plane. They interacted with one another, or rather, angels brought the apocalypse upon the earth and came down to earth to be among humans.

Penryn had more than her fair share of worries even without the apocalypse, what with her lame sister and her schizophrenic mother. That alone was already a lot. Set in the newly post-apocalyptic world, survival took on a whole new meaning. I think that is where the series name makes sense: Penryn & the End of Days.

I immediately had a compassion for her though her mother did disturb me. I’m not sure though if the portrayal of her mother disturbed me more or the idea that

Then there was Raffe. It took me some time to warm up to him. Bad boy characters don’t usually do it for me. But an angel that apparently is very dark without technically being a fallen angel did hold its fair share of intrigue. He made a number of biblical references too, which brought out quite a juxtaposition between the biblical portrayal of angels and the Angelfall portrayal of angels.

Apparently there was Romance

As much as I read swooning reviews about Angelfall, I wasn’t knocked off my feet by the romance. And that’s okay because I’m not a fan of all-out romance. I like it on the sidelines as a subplot. I guess Angelfall did have romance bubbling beneath the surface but it didn’t take over the plot. The need for survival, the darkness and the grotesque always stayed at the forefront, which made for a much more “realistic” dystopia, in my opinion.

In the end, I’m glad I decided to listen to Angelfall. Caitlin Davies was a splendid narrator and the book itself was also a good one. Such combinations are always very satisfying, so had I had high expectations, Angelfall would still have met them with ease. I for one, have already downloaded the next book, World After and am all set to continue with the series.