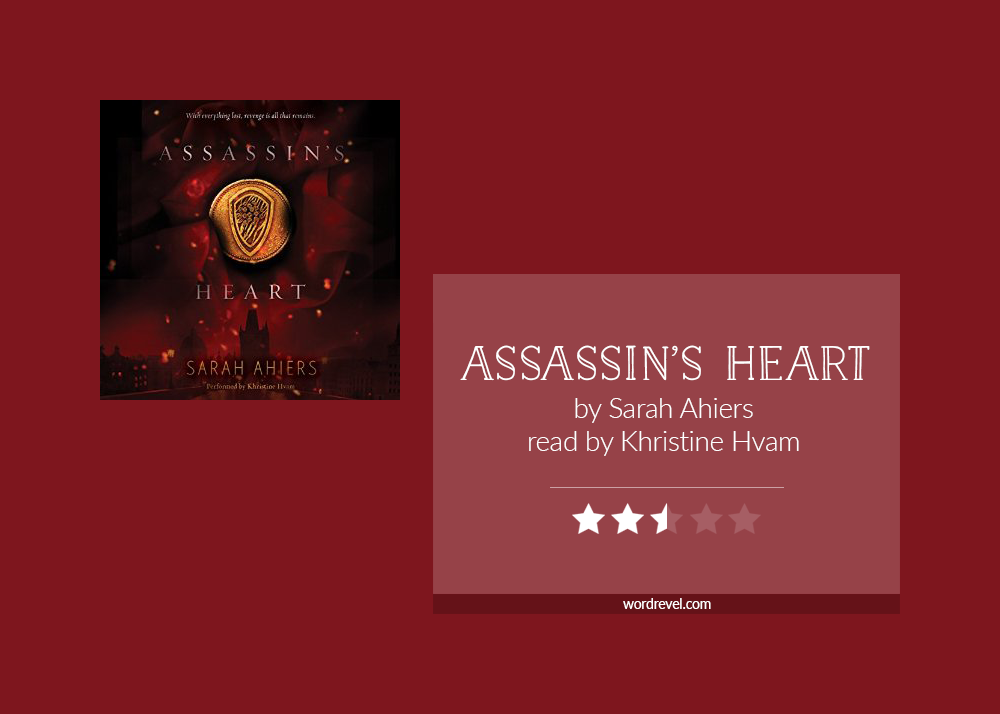 Seventeen-year-old Lea Saldana is a trained assassin. She was born into one of the nine clipper Families in the kingdom of Lovero who lawfully take lives for a price. As a member of the highest-ranking clan, loyalty to Family is valued above all, but that doesn’t stop Lea from getting into a secret relationship with Val Da Via, a boy from a rival clan. Despite her better judgment, Lea has fallen in love with him; but she’s confident she can anticipate any threat a mile away.

Then she awakens one night to a house full of smoke. Although she narrowly escapes, she isn’t able to save her Family as their home is consumed by flames. With horror, she realizes that Val and his Family are the only ones who could be responsible. Devastated over his betrayal and the loss of her clan, there’s just one thing on her mind: making the Da Vias pay. The heart of this assassin craves revenge.

Assassin’s Heart wasn’t a book that I had prioritised to read. The reason I got to it so soon after publication was that I had the maximum 6 credits on my Audible account. In order not to forfeit any credits, I had to spend one before the new cycle. Since Assassin’s Heart was the only book available as an audiobook from my TBR (to be read) pile among the titles I didn’t own, I went for it. Essentially, I went in without any set expectations.

The religious order of Assassin’s Heart was what I liked most about it. Lea was born into one of the nine clipper Families of Lovero. She was raised as a lawful assassin in worship of Safraella, the goddess of death. That’s a morbid premise since assassinations and sister suicides were a daily affair, it made me very curious how a society would function. Besides, with death cloaking Lovero, I thought Assassin’s Heart would have my heart racing. Strangely, that was not the case.

Despite the sinister undertones, the overarching plot was about revenge and seeking Lea’s uncle to exact revenge. The search for her uncle was a huge part of the book. That meant less time left to explore what it meant to be follower of Safraella. As a result, the plot wasn’t as tight as I would’ve liked. There were so many unanswered questions.

As much as the basic structure of world was built well, the substance and reasons were missing. Why was killing in the name of Safraella the right thing to do when outside of religion it would be plain murder?Why were there nine clipper Families in Lovero to do Safraella’s bidding? How were there still people still alive with so many clippers in their midst?

Then there were the masks. They had no rhyme or reason. Each mask was unique, making it possible to identify the wearer. Might as well have tossed them. On hindsight, could this idea have stemmed from Greek theatre and worship of gods through masks? I did get that sense but maybe more time could’ve been spent on explaining how masks were an act of worship towards the goddess Safraella rather than superfluously explain words.

Linguistically, Assassin’s Heart could have done with another round of editing. The whole semantics of “Family before family” and explanations of obvious meanings that could be inferred of “clipper” and “traveller” were sorely misplaced. And really, any book that gets published with, “I released a breath I hadn’t known I had been holding,” and “I released my own breath, not even aware I’d been holding it,” slipping through surely couldn’t have been ready. I’m also glad I listened to the audiobook rather than read the words on a page — the capitalisation of Family would’ve driven me nuts.

Khristine Hvam was a great narrator, no doubt. However, I didn’t think she was necessarily the best casting choice. Assassin’s Heart was told in the first person point-of-view. The protagonist was a 17-year-old. In the audiobook she sounded like she was a fully-fledged adult. It was a little jarring listening to such an adult voice speak for a teenager.

At Least it was Entertaining

Now, with so many gripes, how did I even rate Assassin’s Heart 2.5 stars? The plot itself was entertaining. There weren’t that many surprises but ghosts in the desert, knowing another death was just around the corner, the promised vengeance — these were elements that made it worthwhile anyway.

Too bad Lea could so incompetent though. I really couldn’t understand why she should have the favour of the gods to survive a fire that killed everyone else in her Family. She knew her poisons but in physical combat, she was exceedingly careless. How does an assassin even survive that?