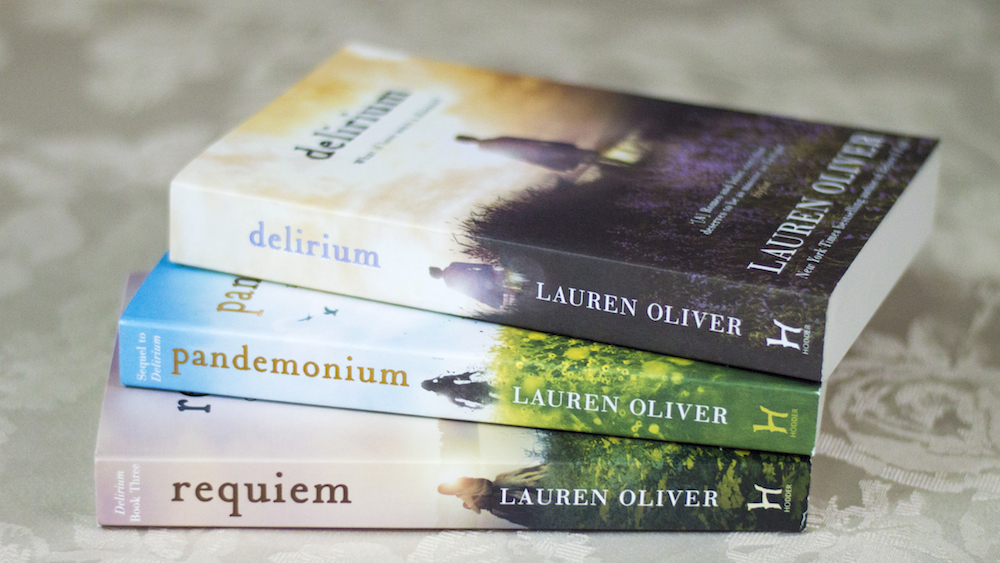 Popular books tend to have a multitude of different book covers not only in various languages but also for the English versions alone. The Delirium trilogy by Lauren Oliver is no exception. I know of five different English book covers for Delirium! Either way, I thought I’d take a look at this series since I intend to read it soon (it’s true, I haven’t read it yet).

I don’t know what to make of these faces. Or this one face, since in the very least they’ve featured the same model on all three covers. That’s a plus for continuity. Also, different plants/flowers are depicted on each cover, such that the colour schemes vary. Beyond that I have nothing much to say. I don’t know what plants these are and if they have any meanings or connotations attached to them. All I can say is that this is a story about a girl.

These book covers are so nice to look at, I wouldn’t mind hanging them up as posters in my room. They look good individually but also look wonderful and complete as a set. While I’ve heard from many that these covers don’t exactly relate to their stories, at least the tag lines tell me more. “What if love were a disease?” on the Delirium cover lets me know that this book revolves around love. And what if love were a disease? It’d be really sad and I’m curious how Lauren Oliver pictures such a world.

“[A] Romeo and Juliet story that deserves to be as massive as Twilight.”
—Stylist

I didn’t like Twilight very much. I listened to all the audiobooks because I didn’t want to sit down to read the books myself but I wanted to know why one of my good friends loved it so much. My entire team in eleventh grade was passing around the books to each other to read. I didn’t want to be left out, so there.

My best friend made me watch Eclipse in the theatre. A mutual friend loved the series and I was supposed to do something nice for her birthday. I had to stuff my jacket sleeves into my mouth to muffle my laughter. Am I the wrong audience for Delirium? I hope not.

Seriously. These comparisons to popular books need to stop. I want originality. Not a carbon copy of another book. Although, I’ve not read The Hunger Games yet either. Does this mean I won’t need to read The Hunger Games once I’m done reading Requiem? Again, I hope not. Besides, I don’t care what Cosmo thinks of books.

When I first saw these covers, I was intrigued. They’re different from most covers. They have words covering the entire page. For Delirium, the word is “Liebe,” which means love. For Pandemonium, “Kampf,” which means fight, and for Requiem, “Freiheit,” which means freedom. These words are etched all over the covers, telling me that these are the concepts that are central to the books.

At this point, I have no idea what “amor deliria nervosa” stands for but if I were to wager a guess, I’d say it’s the term of a love-related disease. It does fit with the word “love” repeating on the cover of Delirium. Then there’s “chaos, wirrniss, tumult” tagged on for Pandemonium. Translated into English, that means, “chaos, confusion, uproar”. Once again, that’s in line with the word “fight”. Lastly, the tagline for Requiem is “missa pro defunctis”. That is the Latin term for requiem mass, also used by the Roman Catholic Church. I guess this is meant to define the book as well.

All in all, I’d say the German book covers were designed in a way that purposefully portray what the story is behind the Delirium trilogy. I’m not left completely in the dark, wondering what I’m in for when I read the books. The progression from one book to the next is evident, even if a little ambiguous. I know the big picture, and now I want to know the details, the characters, the setting, and the plot.

Aesthetically, I’m tending towards the UK covers but only because I like to look at them. In conjunction with the books themselves, I pick the German book covers. I like covers that relate to the stories, and it’s obvious that a lot of thought went into making the connection between the designs and the stories for the German covers. Pretty faces alone just don’t do it for me. Sorry, US cover, you’re last.

I started Book Cover Culture in light of the claim that book covers vary from country to country due to cultural differences. Cultural influences have always intrigued me, so I thought it’d be fascinating to see how they affect translated book covers.