Disclaimer: There are spoilers for the first book in the series, Confessions of an Angry Girl. If you have not read it yet, you might want to check out that review instead. 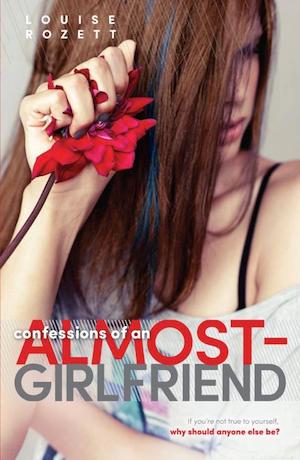 Rose Zarelli has big plans for sophomore year—everything is going to be different. This year, she’s going to be the talented singer with the killer voice, the fabulous girl with the fashionista best friend, the brainiac who refuses to let Jamie Forta jerk her around.

But if she’s not careful, she’s also going to be the sister who misses the signals, the daughter who can only think about her own pain, the “good girl” who finds herself in mid-scandal again (because no good deed goes unpunished) and possibly worst of all, the almost-girlfriend.

When all else fails, stop looking for love and go find yourself.

Rose is back in Confessions of an Almost-Girlfriend, a year older, a sophomore, with a slight bit more mature voice, and a whole lot more problems than when readers first got to know her in Confessions of an Angry Girl. She needs to decide for herself what to do with Jamie. She still has the cheerleaders on her case. She and her brother are not exactly talking to each other either. She also hasn’t stopped missing her dad who died in Iraq the previous year. In the very least, she has her best friend back by her side.

As tough as starting high school as freshman was, sophomore year is not any more forgiving. Sometimes being a nobody is easier because nobody knows you. For Rose, there is no retreat. Everybody remembers her and is giving her a hard time for it. Her principles and strong convictions don’t help her get in the good graces of her peers either. That doesn’t stop her though from discovering herself, finding her passions and developing her talents.

Blogging as an Outlet of Grief

True to Confessions of an Angry Girl

The idea of letting go freaks me out. I know Dad now through grief. If I’m not feeling sad about him, he’ll just drift away and fade into the background of my life, which will go on without him. Like he never existed.

She set up a blog as a tribute to him and so connected with others who also lost loved ones in Iraq. At first it seemed to help her but eventually, she felt exasperated with the responses from people who had never even met him. I thought her inner turmoil, and trying to come to terms created more depth to her character.

Her brother’s choices also put her in a very difficult position with her mother. She knew things her mother didn’t know and wouldn’t ever approve of. On one hand, she was done being the tattle-tale. On the other, she did care enough not to want him to get into any serious trouble.

Also, living alone at home with her mother while her brother was away at college added some strain to the mother-daughter relationship. It did not help that her mother felt she was ready to date. Everyone is different after all and that is something I could appreciate while reading this book. The characters were all very believable on the whole without coming off as fake or too over the top.

Outside of home, Rose’s relationships were not any less rocky either. Robert no longer adored her and had found a girlfriend over the summer. This girlfriend also was the new girl in school. Forging a friendship with her obviously was hindered by Robert’s prior infatuation. Reading about all three of them navigate their relationships really amused me. Then there was Jamie. How does anyone deal with rejection? Rose’s emotions were raw and I could relate very well with her as she grappled with her own questions about why she was so drawn to him despite everything that had happened.

Looking Forward to the Third Book

Those who have read the first book in the series definitely should pick up Confessions of an Almost-Girlfriend as well. Everything that I enjoyed in the first book could be found in this book, and a whole lot more. If this is any indication, I can’t wait to read more in the next book when it (hopefully) comes out next year. I do prefer older main characters, so I’m sure I will enjoy an older Rose so much more than I already have.