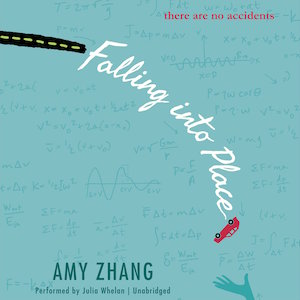 One cold fall day, high school junior Liz Emerson steers her car into a tree. Why? Why did Liz Emerson decide that the world would be better off without her? Why did she give up? This haunting, nonlinear novel pieces together the short and devastating life of Meridian High's most popular junior girl. Mass, acceleration, momentum, force—Liz didn't understand it in physics, and even as her Mercedes hurtles toward the tree, she doesn't understand it now. How do we impact one another? How do our actions reverberate? What does it mean to be a friend? To love someone? To be a daughter? Or a mother? Is life truly more than cause and effect?

When I first finished reading Falling into Place, I didn’t know how to rate it. It spoke to me in the most painful manner. No other book in recent memory has made me cry so much. When I wasn’t crying, I was on the verge of tears. The rest of the time I was uncomfortable. Liz wasn’t a nice person and yet I felt a connection because a lot of her thoughts had been mine before.

Sometimes people have no capacity to connect with others. When that happens, they find solace elsewhere. Liz found her escape in sports. Soccer often was her only source of joy. No matter how badly her world was falling apart, on the pitch everything was right.

“What came to her mind was this: the moment when her foot connected with the ball at the perfect angle, with exactly enough force and just the right timing. It was a rare thing, and it was from those exceedingly rare moments that her weird zeal for soccer took root and grew into something immense. She got this feeling of rightness after every beautiful pass, every soaring shot.” (Chapter 24)

What struck me about Falling into Place was the release that Liz gained from the sport alone. It wasn’t her teammates who pulled her out of her loneliness. What mattered was the rush that she got from the game. She had known her teammates for seven years and yet she hardly knew them.

“She just didn’t care very much, and as she sat on the bench with her team around her, the absolute sadness of the fact overwhelmed her. She knew so many people, so many, but what was the point? How many of them did she really care about? How many of them really cared about her?” (Chapter 24)

Liz’s realization is akin to my own. I’ve had so many teammates over the years but the fewest of them truly became my friends. I found my motivation from within, even if I hardly cared about anyone else on court. It’s a sad moment when it hits you. There’s an emptiness mixed into the fulfilment gained from activities involving so many people one doesn’t know or care for. Falling into Place hit me right in the gut for conveying that kind of sadness specifically.

Liz had been an exceedingly terrible person. She knew that. And that’s what ultimately sent off the edge. There was no reason for living if she destroyed the lives for so many, not just people she hated but people she loved too.

Falling into Place so beautifully captured despair and emptiness. It asked the hard questions. At the same time, it called out people for hypocrisy. When someone’s alive and well, we’re alright with hating them. Yet if their lives are taken too early, suddenly we extol their virtues. Doesn’t matter how horrid that person previously had been.

With Liz dying, so many people acted like she was already dead. Until they were reminded that being comatose meant that however slim the chances, there still was hope.

Ambiguity of the Narrator

One aspect that threw me off was the perspective and the identity of the narrator. Falling into Place wasn’t told from a conventional third-person perspective. It contained snippets pieced together — of the present and of foggy memories. The narrator’s relation to Liz is implied and never fully revealed. This added a layer of ambiguity that I felt put everything a little bit off balance. Given my emotional connection to the book though, I was thankfully distracted enough not to be too bothered by the strangeness of the narrator.