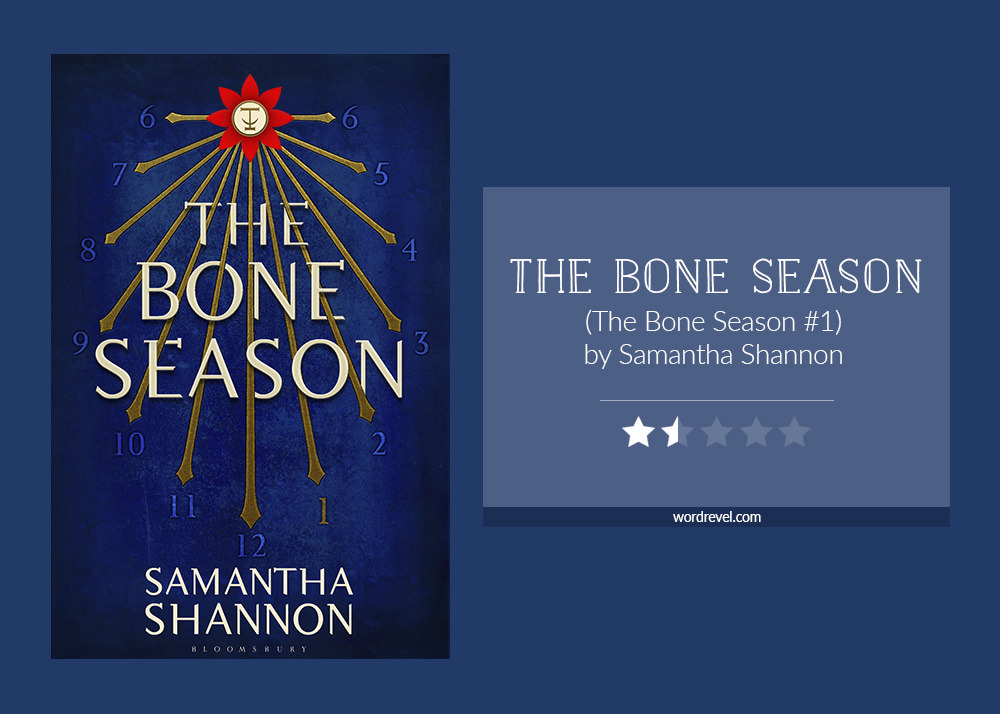 A dreamer who can start a revolution

For the past two hundred years the Scion government has led an oppressive campaign against unnaturalness in London.

Clairvoyance in all its forms has been decreed a criminal offence, and those who practise it viciously punished. Forced underground, a clairvoyant underworld has developed, combating persecution and evading capture.

Paige Mahoney, a powerful dreamwalker operating in the Seven Dials district of London, leads a double life, using her unnaturalness illegally while hiding her gift from her father, who works for the Scion regime…

Originally I had planned to post a different book review today but I finished The Bone Season this afternoon and am brimming with thoughts. Even though I enjoyed most of my time reading the book, I walked away with conflicting feelings. The more I think about the things that bothered me, the more I feel like I need to get them off my chest. While I can’t say I hated the book, there are parts that made me uncomfortable and I wish I had known about these things before buying the The Bone Season. As it is, I already bought the next two sequels before starting the series (I should’ve learnt my lesson by now), and I do plan to read The Mime Order next.

Before going into details of what tripped me up about The Bone Season, let’s consider what added to my enjoyment in the first place. What most stood out to me was how well the plat was paced. There were heart-racing moments, and there were slow ones. For both, the beat of the story worked well. I really liked how varied the pace was, which especially allowed tentative moments to breathe, whereas the urgency at other times struck me so hard. It’s this which sucked me right into the book and compelled me to keep reading.

The Bone Season took place in an alternate world that mirrors our own. although, set in 2056, it confused me a little at first. I had a hard time grasping that that would be future London because it gave me the impression of a futuristic Victorian era more than anything else. Once I grasped that Scion London isn’t meant to be an actual imagining of London in 2056 A.D., I carried on.

My favourite part was naturally, the underworld — the one alluded to in the synopsis. Since clairvoyants were shunned by society, their best chance of survival was to join criminals syndicates. Details weren’t all too clear about why clairvoyants lived on the periphery but I was willing to overlook that in favour of the dark side of Scion London. Learning about the various abilities of the clairvoyants took effort because there were so many but that added complexity, variety and nuance, which I appreciated.

Yes, I know I said I liked Scion London but there’s another layer: the underworld of the underworld. Just as Scion London was starting to make sense, The Bone Season went a level deeper. Felt like the setting had an identity crisis and didn’t like where things started. That’s where things started to unravel. There were dense descriptions who was who, their capabilities, and how their surroundings looked like. That’s important, certainly. However, the important questions were unanswered.

Why were things happening the way they were? I mean, beyond the usual plot line of villain wants something from the exceptionally gifted protagonist. How did this deeper underworld even come to be? View Spoiler »And while we’re at it, why didn’t Nashira destroy Warden and his fellow rebels before? Even more confounding, why make a former rebel a betrothed in line for sovereignty? « Hide Spoiler

When it came to the actual plot, the originality was lacking. The Bone Season read like a straightforward YA dystopian book. Protagonist is captured/trapped in a situation against her will. She has to go through certain trials to prove herself. Meanwhile, her superiors are also the antagonists who must be destroyed. One of the superiors grows sympathetic towards the protagonist. He turns on his own kind to help her. They develop feelings for each other (out of nowhere). Ultimately, they raise an insurgency to gain their freedom, and people die.

Now, every genre has its clichés. What sets a book apart from the others are plot twists that subvert expectations. There was nothing about The Bone Season‘s story that surprised me. Since there are seven books planned for the series, I hope subsequent books will branch off into more unique plot lines since the generic one’s already reached its conclusion.

I’m not a fan of constant flashbacks. I don’t like being thrown around from the present to the past, especially when the past doesn’t add much in terms of explaining the present. That’s a matter of personal taste, though, so I’m just putting this out here for anyone else who feels the same way.

The glossary contains 109 words, most of which are made up. To be fair, they’re supposed to reflect the slang of Scion London. Props for aiming for authenticity but many of these weren’t defined within the novel itself. It’s no wonder my head hurt from deciphering cryptic sentences. I started with the audiobook before switching to the hardcover edition. This means I didn’t even know the glossary existed until half-way through. By then I nearly didn’t care anymore about looking up words. Also, there were inconsistencies about which words were included. Some French and Swedish foreign words used in-text weren’t included in the glossary.

With that, we’ve come to the parts that I actively disliked. Most of my discomfort was premised on the romance. For one, Paige developed romantic feelings for Warden. when Warden was first introduced, I read on with trepidation. I knew where this was going, even if the romantic build-up was lacking. At the point they kissed and she started to undress him, the chemistry was non-existent.

Never mind the poor romantic development. What irked me was that master and slave even ended up in a romantic situation. In the interest of full disclosure: they established between the two of them that their relationship would be that of a mentor and a student. To everyone else, they continued to act like master and slave.

Paige was abducted and brought to Sheol I. She was held there against her will. Her identity was stripped and she became number 40. She and other clairvoyants were ranked, the colours of their robes signifying where they stood. They had to earn higher-ranking robes through trials that tested their abilities.

Disregarding semantics, the power dynamic between Warden and Paige remained of master and slave up to the point of their escape. Also, she had trust issues, for crying out loud! After all that distrust, she let her guard down for Warden? Why? Because she owed him her life several times over? I thought she didn’t want to be indebted, but okay. Plus, she’d had a thing for this other guy, Nick, for nearly ten years. He didn’t reciprocate but she wasn’t in captivity that long to forget her hurt over Nick.

Let’s not forget either that Warden was not human. He was at least 200 hundred years old, if not more. Of course, he was an attractive supernatural being who resembled a young attractive man. Paige couldn’t help herself, no? Of course not. Frankly, I’m tired of this set-up. I can’t find an ounce of romance in that, and just thinking about it makes me shudder.