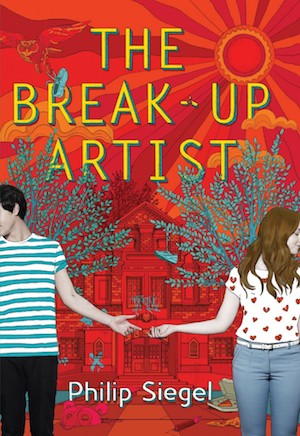 Becca knows from experience the damage that love can do. After all, it was so-called love that turned Huxley from her childhood best friend into a social-world dictator, and love that left Becca's older sister devastated at the altar. Instead of sitting on the sidelines, Becca strikes back—for just one hundred dollars via PayPal, she will trick and manipulate any couple's relationship into smithereens. And with relationship zombies overrunning her school and treating single girls as if they're second-class citizens, business is unfortunately booming. Even Becca's best friend, Val, has resorted to outright lies to snag a boyfriend.

One night, Becca receives a mysterious offer to break up the most popular couple in school: Huxley and raw football team's star player, Steve. To succeed, she'll have to plan her most elaborate scheme to date—starting rumors, sabotaging cell phones, breaking into cars…not to mention sneaking back into Huxley's good graces. All while fending off the inappropriate feelings she may or may not be having for Val's new boyfriend.

No one said being the Break-Up Artist would be easy.

Considering how much of a cynic or a realist I am (depending on whom you ask), The Break-Up Artist should’ve been the perfect book for me. The premise drew me to The Break-Up Artist in an instant. I thought I would meet an anti-hero but I didn’t. I thought I would finally not have to roll my eyes at cliché lines. That held up for a good part of the book, until I did roll my eyes. View Spoiler »Our dearest break-up artist herself fell for gag-worthy sweet-talking. « Hide Spoiler

Why I Expected to Be Able to Relate

Before I proceed to dissect The Break-Up Artist for all the things I didn’t like, I think it’s best to mention a little about my own background to explain why I of all people should’ve been able to relate to Becca.

See, I’ve had several friends who dated people who clearly weren’t good for them. That’s why I couldn’t wait for them to break up with those people they dated. I’ve also been part of pity parties, where friends were all concerned about me not dating anyone.

In fact, I remember that once, I had just about pulled out my chair at a restaurant for dinner, when someone asked, “Jo, are you sure you don’t ever want to get married?” I never had made such a statement myself but she was blissfully in love with her boyfriend and couldn’t believe I wasn’t doing anything to obtain that kind of bliss myself, so maybe to her, not being over-eager to have a guy by my side was worrying. Several friends too have asked me why I don’t give up competitive sports, or at least spend less time on sports, so I have more time to put myself out there and meet someone.

It Did Have Entertainment Value

Given all that flak I’ve had to deal with and also my current not so romantic disposition, I expected The Break-Up Artist to be a very entertaining read that reflected my own outlook on romance not having to rule someone’s life. To some degree, I was entertained because Siegel, to his credit, knows how to inject snark and humour, while keeping the plot going.

There Was Little Character Progress

Sadly, as much as the plot twisted, turned and wound around the bends, the driving force pretty much remained the same—at least until the very end, by which point it hardly even mattered anymore. And you have to hand it to Becca; her resolve to break up people didn’t waver, even when it came to her best friend. She was adamant that Ezra wasn’t right for Val.

Couples are made to be broken.

As an opening line, I thought it was very intriguing, and definitely set the tone for The Break-Up Artist. Interestingly, when a guy did show interest in her, and she felt the chemistry between them, she became amazingly stupid. View Spoiler »He fed her lines that she had heard before. Take, “I can see myself falling in love with you.” Where had she heard this line before? From her best friend who was dating that very guy. Yes, Becca seriously contemplated cheating on her best friend to be with this guy. « Hide Spoiler One could try to argue that this portrayed Becca’s character flaw because nobody is perfect. I don’t buy that. When people are this convinced about something that they’ll set fire to the world (figuratively speaking), then a bucket of water ain’t gonna put out that fire.

Girls Were Nothing Without a Guy by Their Side

Then there was this glorification of guys, justified by the fact that there was a 65/35 girl to guy ratio. Apparently guys could take their pick from overly eager girls who dreaded not having a boyfriend. No girl was immune to that, except Becca, who thought she was above all that. Until she met the guy whom she thought she had a connection with. I call shenanigans on that one. I attended a high school where girls clearly outnumbered guys, and honestly? Nobody cared. Sure, many couples happily paired off, some people were jealous, but the rest had no interest in dating. The rest had other things to occupy themselves with, like friends, schoolwork and co-curricular activities. Not every teenager has raging hormones that are out of control to the point that they slump into utter despair because they have no significant other.

If only that high school setting would’ve been satirical. I would’ve appreciated that. Alas, it wasn’t. Satire would’ve worked well because of the penchant for exaggeration on the part of Becca. Like I said, not everyone feels inclined to date. Not every girl is begging to have a boyfriend in high school. The Break-Up Artist could’ve played off that and gone the satirical route, which would’ve made these ludicrous assertions acceptable.

As for true friendship, which was supposed to trump any romantic relationship, I don’t see how Becca even honoured that. She was left in the dust when her former best friend, Huxley, found a boyfriend. Their friendship crumbled, so she came to blame relationships for her plight. It was this personal vendetta that fuelled her such that the moment Val had a boyfriend, Becca turned away from Val. Becca avoided Val. It wasn’t all on Val for ditching Becca just because she had Ezra.

As much as I liked the premise, I struggled to take it seriously by the time I had even reached page 50. Becca accused people in love of being selfish.

Why do people want to be in love when they know its side effects? Some really are that selfish.

Yet her actions too were mostly selfish acts. To some degree that was understandable since her sister had been led at the altar. That majorly sucked for her sister, so it was inevitable that her sister’s jadedness would rub off on her. Still, that didn’t give her the right to sit on that high horse, thinking she was better than everyone else.

In the very least, the resolution made up for some of my gripes, I suppose. It definitely kept me from slamming this book because every 50 pages or so, I contemplated putting it down. The hope that things would get better made me read on though. Seriously, if Siegel didn’t lend Becca that entertaining voice, I don’t think I would’ve finished reading The Break-Up Artist.