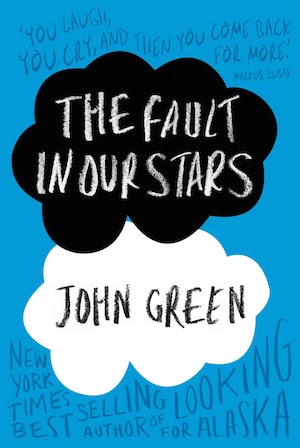 The Fault in Our Stars by John Green • contains 318 pages • published 10. January 2012 by Dutton Books • classified as Contemporary, Romance, Young Adult • obtained through Overdrive • read as eBook • shelve on Goodreads

Despite the tumor-shrinking medical miracle that has bought her a few years, Hazel has never been anything but terminal, her final chapter inscribed upon diagnosis. But when a gorgeous plot twist named Augustus Waters suddenly appears at Cancer Kid Support Group, Hazel's story is about to be completely rewritten.

My Expectations Before Reading

I braved the hype and finally read The Fault in Our Stars. Before I read this book, I knew surprisingly little about it, considering the massive popularity and the release of the movie. For the most part, I managed to skip past all the spoilers, especially on Tumblr. Of course I knew that John Green wrote it and that it was about cancer. Oh and I didn’t manage to escape the metaphor of the cigarette. Then again, I couldn’t make heads or tails of it, so that doesn’t really count.

In terms of expectations, I tried to ignore all the hype surrounding this book. Still, I couldn’t ignore that John Green wrote The Fault in Our Stars—not necessarily because of who he is but rather because I’ve read two of his stories before. The first was A Cheertastic Christmas Miracle in Let It Snow, and the second was An Abundance of Katherines.

A Cheertastic Christmas Miracle amused me greatly, and I thoroughly enjoyed Green’s writing style for the story that he had written. As for An Abundance of Katherines, it’s one of those books I disliked so much, I still am irked just thinking about that book. After reading The Fault in Our Stars, I’ve decided that John Green is a hit-and-miss kind of author for me.

My Thoughts on The Fault in Our Stars

What I enjoyed most about The Fault in Our Stars was the prose. Paradoxically, I didn’t very much care for Hazel’s voice. The writing style itself was clear and concise, with few words wasted. But the voice of Hazel’s left me unconvinced.

I hated hurting him. Most of the time, I could forget about it, but the inexorable truth is this: They might be glad to have me around, but I was the alpha and the omega of my parents’ suffering.

Either way, the characters themselves were likeable enough to me, even though they lacked the depth I’d expect from people who were on the brinks of their deaths. They lived day-to-day, not knowing if that day would be their last. Somehow that didn’t translate. In fact, the frailness and fragility of Hazel didn’t even came across, in my opinion. View Spoiler »I was particularly incredulous when Hazel still had the energy to sleep with Gus for the first time in the Amsterdam hotel, after she had been so breathless climbing the stairs in the Anne Frank House. « Hide Spoiler

In terms of the romance, the relationship between Hazel and Gus was very sweet and innocent, and I couldn’t help but root for Gus. He pursued Hazel with all his heart, was unrelenting, fully treasuring every moment that he had with Hazel. I liked that for all the time that they spent together, they didn’t sideline Isaac, who was Gus’ best friend.

Sadly, even though I got to know Hazel, Gus and Isaac pretty well in terms of their ailments, likes and dislikes, I just didn’t connect. At no point during the book did I feel inclined to cry, even though I tend to be very emotionally involved in the books that I read. I wasn’t moved much by the story. I think in part that’s because I felt the approach to the issues at hand was too light-hearted and a bit too concerned with wittiness.

It’s not that I expect a book such as The Fault in Our Stars to be solemn every single moment but glossing over the worst sides of cancer, and indulging so much in the romance between Hazel and Gus left a lot to be desired in terms of the pain that they suffered physically, mentally and emotionally because of their terminal illnesses.