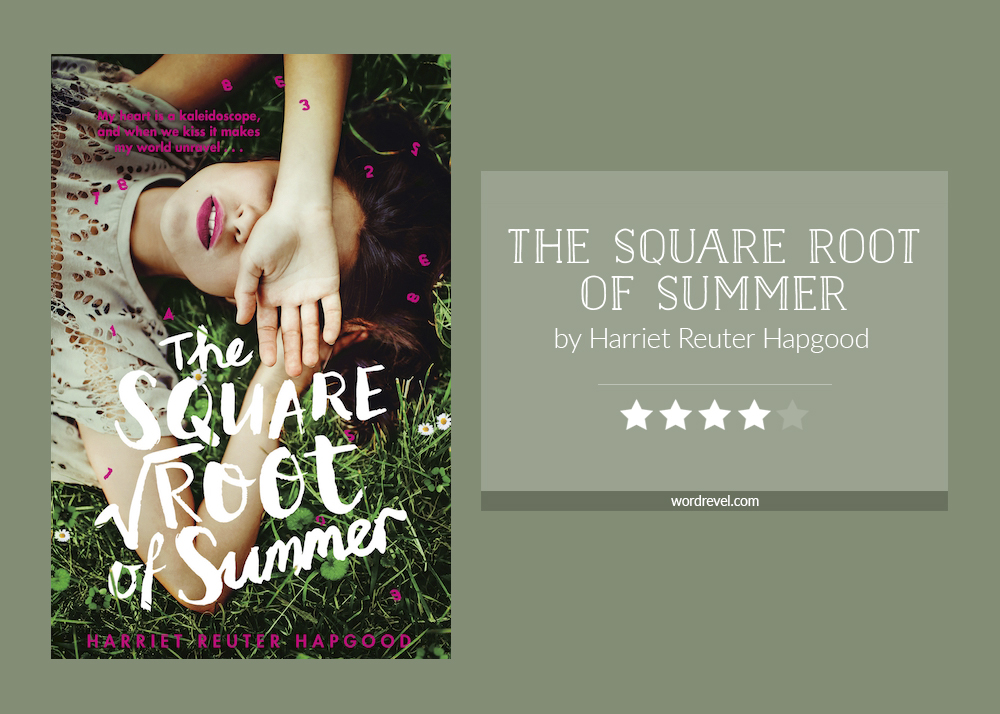 My heart is a kaleidoscope, and when we kiss it makes my world unravel...

Last summer, Gottie's life fell apart. Her beloved grandfather Grey died and Jason, the boy to whom she lost her heart wouldn't even hold her hand at the funeral. This summer, still reeling from twin heartbreaks, Gottie is lost and alone and burying herself in equations. Until, after five years absence, Thomas comes home: former boy next door. Former best friend. Former everything. And as life turns upside down again she starts to experience strange blips in time – back to last summer, back to what she should have seen then...

During one long, hazy summer, Gottie navigates grief, world-stopping kisses and rips in the space-time continuum, as she tries to reconcile her first heartbreak with her last.

The Square Root of Summer is an astounding and moving debut from Harriet Reuter Hapgood.

The Square Root of Summer is such a quirky book. It contains little illustrations and while it starts off like a contemporary read, it plunges into science fiction through time travel. Time travel in this case doesn’t pertain to fantastical notions of visiting another era. Here things are grounded a bit more in physics, incorporating discussions of the space-time continuum, the speed of light and the effect of gravity on one’s ageing process. If there’s one thing to be said, the main character is exceedingly smart and prides herself in her intelligence.

Though I didn’t like mathematics and struggled to pass physics in tenth grade, I enjoyed Gottie’s explorations and the underlying philosophical musings. The integration of physics and astronomy into the story does give rise to an odd pacing. The illustrations further break things up, on one hand aiding understanding of the concepts, while on the other, forcing readers to consider the abstract notions that Gottie deals with. It’s this off-kilter pacing that initially distanced me from the characters.

It took me some time to get used to it but when I did, I came to appreciate its parallels to the ways in which Gottie experiences reality. Time for her is a very non-linear concept, despite the chronological dates that the chapter headings are entitled with. That off-kilter perception of time is probably what made me feel unsettled, which in the case of The Square Root of Summer was a good thing, even if it took me several chapters before I started to appreciate it.

Gottie’s father is German. That’s why German phrases and cultural elements are integrated as well. It makes sense since he raised her as a single-parent with the help of her maternal grandfather, Grey. However, there were some instances during which I wasn’t sure why there were linguistic errors. Were they supposed to represent her weaker links to German as opposed to British influences?

Take the game scissors-paper-stone, or rock-paper-scissors, depending on where in the world you were raised. In German, it is known as Schere, Stein, Papier. Strangely, Gottie refers to Fels, Papier, Schere. Firstly, the sequence is different from the conventinal German. Then there’s the word choice Fels rather than Stein. Stein in German means “stone”. Fels means “rock”. Effectively, instead of going with German conventions, the literal translation of rock-paper-scissors is used in the book. Initially I dismissed it, thinking that Gottie took German as a foreign language for her GCSEs. That was until I learnt her father’s German.

Then comes a note that her father later leaves for her. It starts off, “Sie sind verantwortlich […] Dein, Papa” In this case, Sie formally means “you” and Dein informally means “yours”. That’s an inconsistency that shouldn’t have come from her father. Had the entire note been formal, it could’ve been seen as an inside joke but otherwise, family and friends speak informally among one another.

While these are little things, they’re not difficult to research and get right. In the grand scheme of things, these aren’t even significant to the story per se. However, linguistic oversights like these often make me wary. The onus is on authors and editors to ensure accuracy when foreign languages are used in a book.

While I can’t ascertain the accuracy of the physics as I did with German, I did think that The Square Root of Summer contains a very clever plot. It seems entirely plausible in our world, even if highly unlikely to happen. There’s a logical order to everything that readers with scientific minds would surely enjoy.

Those who prefer empathising with characters over analysis and philosophies about the world won’t be disappointed either. Gottie struggles through her summer, grappling with her grief over the passing of her grandfather while trying to figure out the meaning love.