Disclosure: I received a review copy of What If It’s Us from Pansing Books, a regional distributor, in exchange for an honest review. This does not affect my opinion of the book or the content of my review. 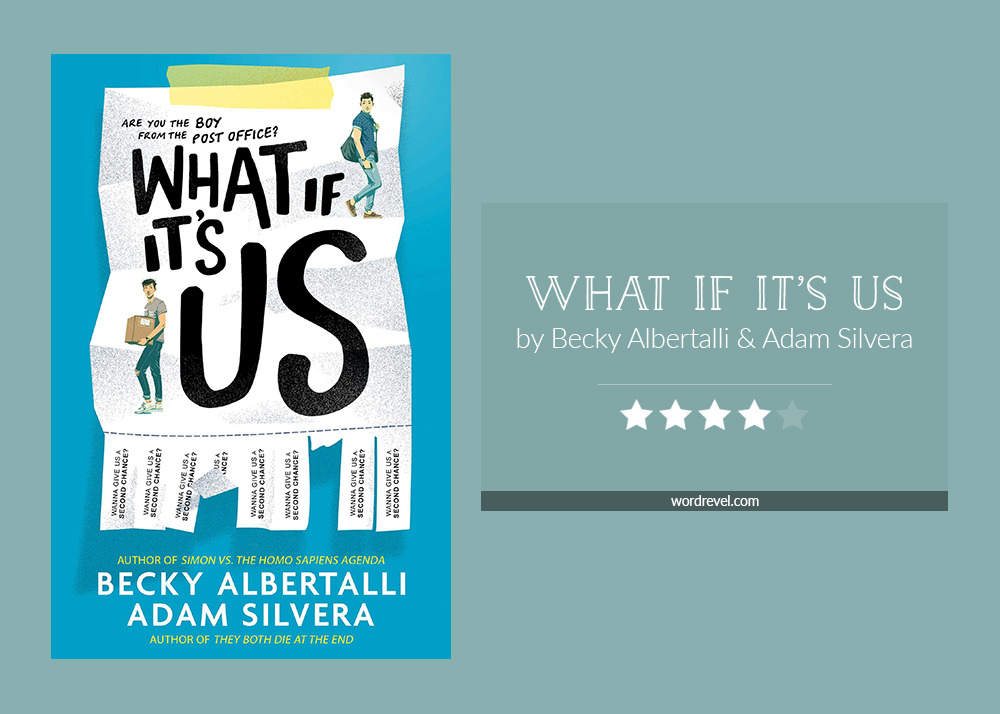 From NYT bestselling authors Becky Albertalli (Simon vs. The Homo Sapiens Agenda) and Adam Silvera (They Both Die At The End) comes a long-awaited collaboration about two very different boys who can't decide if the universe is pushing them together or pulling them apart.

ARTHUR is only in New York for the summer, but if Broadway has taught him anything, it’s that the universe can deliver a showstopping romance when you least expect it.

BEN thinks the universe needs to mind its business. If the universe had his back, he wouldn’t be carrying a box of his ex-boyfriend’s things.

But when the boys have a chance meeting at the post office, they leave wondering what exactly the universe does have in store for them.

What if – in a city of eight million people – they can't find each other again?
What if they do... and then can’t nail a first date even after three do-overs?
What if Arthur tries too hard to make it work and Ben doesn’t try hard enough?
What if life really isn’t like a Broadway play?
But what if it is?

All Smiles Over What If It’s Us

Believe it or not, I used to love cute romance books. As I hit my twenties though, I suppose I became somewhat jaded. I hardly reached for these books anymore, and when I did, I didn’t enjoy them anywhere near as much as before. Then along came What If It’s Us. I couldn’t stop smiling while reading it!

Y’all, What If It’s Us is the absolute cutest! The juxtaposition between a hopeless romantic and a sceptic worked so well. Plus, the differing ethnic and class backgrounds of Ben and Arthur made it a lot more interesting and engaging. They actually had to work at overcoming differences. That’s why I rooted for them. Well, Arthur was enthusiastic at putting in the work because you know, hopeless romantic… But that’s precisely what I liked — nothing was taken for granted about this romance.

Ben’s and Arthur’s parents cared about their son’s lives and they were great role models for them too. In fact, I found the transparency between the parents and the sons quite refreshing. After all, it’s not often you read that in YA books.

Likewise, Ben and Arthur friends who really mattered to them. As a result, they had strong support bases. Near or far, their lives were intertwined with their friends, and that showed. No matter how much they had on their plates or how wrapped up they were in pursuit of love or mending heartbreaks, they were present for one another.

A Book for Many Moods

Overall, the characters were so pure and precious. That’s why What If It’s Us is bound to fit a lot of readers’ moods. If you’re happy, you will find more joy. If you’re down, you will be reminded that there is good in this world.

What If It’s Us captured everything from sadness to bliss and all the awkwardness in between, including questions about acceptance from friends for being gay. There were ups and downs, bouts of jealousy, uncertainty, hopefulness and more.

I just wish that there had been more to the plot. Even though the secondary characters mattered a great deal, the romance still managed to be so central to the book, that it engulfed every single page. That left very little room to explore the tiny twists that did occur.