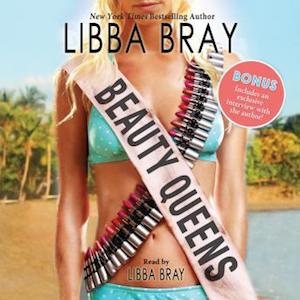 Teen beauty queens. A “Lost”-like island. Mysteries and dangers. No access to e-mail. And the spirit of fierce, feral competition that lives underground in girls, a savage brutality that can only be revealed by a journey into the heart of non-exfoliated darkness. Oh, the horror, the horror! Only funnier. With evening gowns. And a body count.

Apparently Beauty Queens is one of those books that is better heard than read. If that is the case, then I fear to think of what reading this book would have been like. As much as I appreciate the effort Libba Bray put into creating voices for all of her characters, I wanted to scream every time I heard the annoying voice of that ditzy girl. I forgot her name but she was supposed to represent a stereotypical dumb blonde. Overall, the narration itself was overly perky and the incessant inflections at the end of each sentence made me cringe. Were we still in an age of cassette tapes, I would’ve torn the magnetic tape to shreds.

What made it worse was the inclusion of fictitious commercials. I suppose these were there to demonstrate how pointless advertising can be for products that nobody needs but are told they need. I think that they added an unnecessary layer, considering that Libba Bray attempted to address a lot of issues.

Even though I failed to appreciate the way various issues were presented, I can’t say I disagreed. For instance, how should gender be determined? Is it permissible for a transgender person to take part in a beauty pageant? Why do individuals even join beauty pageants? What do beauty pageants stand for? What is beauty? How can females stand up to discrimination? These issues and more were embedded into the story of Beauty Queens and they are the only reason I didn’t completely shut down while listening to the audiobook. Although, I would’ve definitely liked a little more subtlety.

At the end of Beauty Queens, I didn’t connect with a single character. In fact, for the most part, they melded into each other so much I could hardly tell them apart. Sure, I knew one of them wanted to become a lawyer, one needed the scholarship money, and another wanted to prove that girls of colour were just as good as white girls. However, I wouldn’t have been able to write up a simple profile for each girl, if I tried. I couldn’t even keep track of how many girls the story followed to begin with.

As for the plot itself, I wasn’t entertained. The humour was lost on me and the story was all over the place. The pieces of the story didn’t quite come together and I frankly was relieved by the time I reached the resolution, not because things finally made sense but because this meant I had come to the end of the book and the 14 odd hours at long last were over.