Disclosure: I received a review copy of Caraval from Pansing Books, a regional distributor, in exchange for an honest review. This does not affect my opinion of the book or the content of my review. 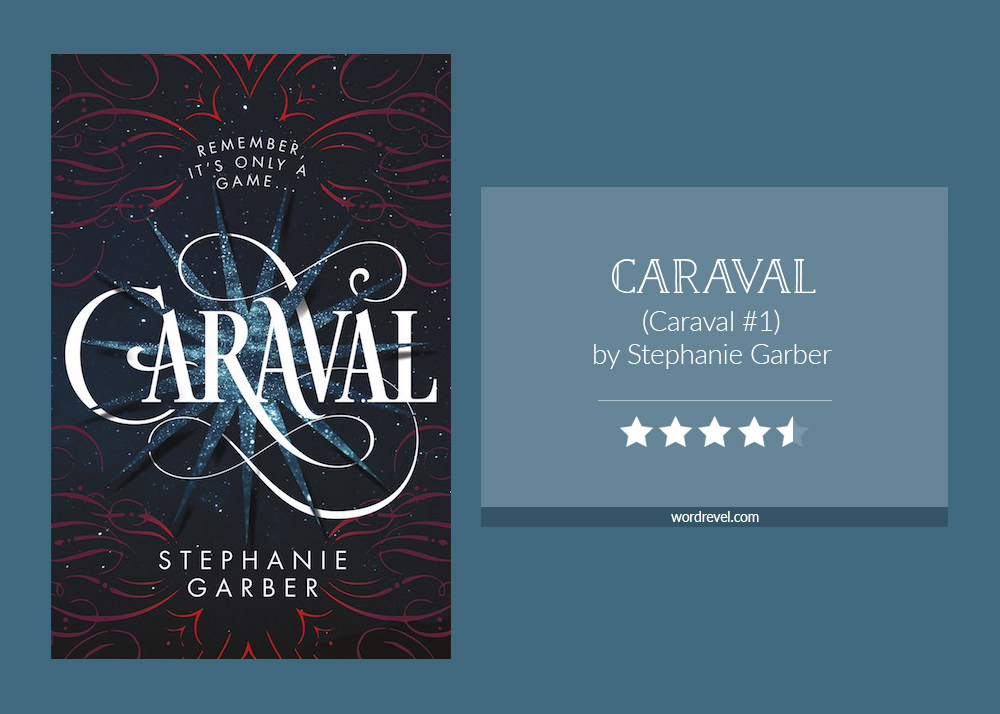 Scarlett has never left the tiny island where she and her beloved sister, Tella, live with their powerful, and cruel, father. Now Scarlett’s father has arranged a marriage for her, and Scarlett thinks her dreams of seeing Caraval, the far-away, once-a-year performance where the audience participates in the show, are over.

But this year, Scarlett’s long-dreamt of invitation finally arrives. With the help of a mysterious sailor, Tella whisks Scarlett away to the show. Only, as soon as they arrive, Tella is kidnapped by Caraval’s mastermind organizer, Legend. It turns out that this season’s Caraval revolves around Tella, and whoever finds her first is the winner.

Scarlett has been told that everything that happens during Caraval is only an elaborate performance. But she nevertheless becomes enmeshed in a game of love, heartbreak, and magic with the other players in the game. And whether Caraval is real or not, she must find Tella before the five nights of the game are over, a dangerous domino effect of consequences is set off, and her sister disappears forever.

Things aren’t always as they seem. Caraval brilliantly plays off this theme on various levels. Reality warps on a grand scale as appearances shift, time stands still, motives are ambiguous and death isn’t always the end. All these factors and more make for quite a mad ride.

Of Games and Performances

If you have read The Night Circus by Erin Morgenstern, you might expect Caraval to deliver a similar experience. Both books involve competition and magic but these take on vastly different forms. The atmosphere too, while carrying a lot of mystery in both books, is different. Caraval overtly is much more morbid, which propels the urgency of the plot. There are several heart-stopping moments that sent me racing through the book.

At the same time, Caraval displays sheer splendour. The setting is exquisite! Imagining it based on the descriptions is a treat to savour. Even when the plot slows down and is allowed to breathe, the imagery makes every moment worth it.

I also enjoyed the performances and trickery woven into Caraval. I couldn’t help but marvel at the creativity that underscores them. They make me wish I could’ve stepped into the book and become a spectator myself.

That being said, I did feel that the grandeur occasionally overshadows the character developments. I like to see various dimensions of characters, including reflections on their thoughts. In Caraval, the actions and appearances matter more than introspection.

When it comes to relationships, it’s not usually the romance that captures my attention. What makes my heart sing are strong bonds between siblings. Caraval embodies the love between sisters very well despite their impatience with one another. Selflessness to the point of foolishness builds dramatic tension in ways that can only transfix the reader, wondering how things will turn out.

Who doesn’t love betrayal served alongside mayhem? In Caraval it’s difficult to tell who is trustworthy and who isn’t. That’s a recipe for double-, triple-, and maybe even quadruple-crossing. Choose your ships wisely, dear readers. I know mine doesn’t sink in Caraval but it sure gets wrecked with all the uncertainty that embroils every last character.

As I’m sure you can gather, I enjoyed Caraval a great deal. It subverted many of my expectations and then exceeded them. Thus, my biggest gripe is this: that I have to wait so long for the sequel. The cliffhanger is mild and reasonably bearable but that world is so entrancing, I want to return to it stat.