Some of you might remember that I was supposed to read Catching Jordan as part of February’s Epic Recs. This was the first time Olena and I had a go at it, so we’re still getting to know each other’s tastes. Anyway, here finally is my review of the book! 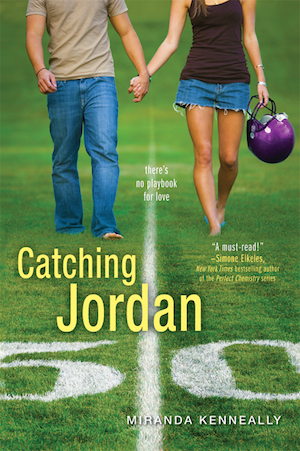 What girl doesn't want to be surrounded by gorgeous jocks day in and day out? Jordan Woods isn't just surrounded by hot guys, though—she leads them as the captain and quarterback of her high school football team. They all see her as one of the guys and that's just fine. As long as she gets her athletic scholarship to a powerhouse university.

But everything she's ever worked for is threatened when Ty Green moves to her school. Not only is he an amazing QB, but he's also amazingly hot. And for the first time, Jordan's feeling vulnerable. Can she keep her head in the game while her heart's on the line?

Catching Jordan was one of those books I had more fun looking forward to than actually reading. For one, books about sports often get me very excited. For another, the protagonist is a girl on a guys’ team! How can this not turn out to be a great book? Simple: when the sports action itself is lacking in the book.

I understand that not everyone is necessarily into sports, so it’s not like I expected to be reading all about tactics and optimum drills to improve in the game. But Jordan is a girl, the starting quarterback and the captain of her high school’s football team. Those are some mad achievements and I respect that a whole lot. Sadly, instead of capitalising on her unusual circumstances, Kenneally turned Catching Jordan into an average romance novel.

Jordan apparently used to be extremely focused on football. She got along with her teammates well and nobody seemed to be bothered that she was a girl. Most of the time they treated her like one of the guys and when anyone came even close to insulting her, they immediately stood up for her. Such sweet teammates she had.

Her best friend, Sam Henry, was also on the team, and they were tight. Tighter than siblings in some aspects, which I thought was so weird on some fronts. View Spoiler »I mean, Henry often slept over at Jordan’s, sharing her bed. Not only that, when they were younger, her mother had caught them and since then, they’ve had to sleep heads to feet. Basically, one had to sleep upside down. « Hide Spoiler But who am I to question a friendship that’s lasted since childhood. My best friend from first through to third grade (my family moved after that) was a boy and we used to tickle each other in class when we were bored, so maybe weirdness is just part of childhood friendships.

Anyway, in comes Tyler, out goes football. Well, not entirely but Jordan’s head definitely came unscrewed with his introduction. Then the romance began. And then a love triangle bloomed. From not giving a hoot about guys romantically to having two romantic interest in her life. Uh-huh. View Spoiler »Surprise, surprise, Jordan couldn’t deal with her confused feelings and ended up skipping a few practices. Way to be a responsible captain! In fact, how did she even earn that title? Oh wait, she’s the quarterback, and the best one in their state at that, so she can afford to slack off for maybe half the book, right? Wrong! Physically, girls are naturally weaker, so can you imagine how much effort Jordan must’ve put into coming this far in the first place? « Hide Spoiler

The one thing that at least added some depth to Jordan as a character was her rocky relationship with her father. He was a football legend but he didn’t like his daughter playing, especially not with her vying for a spot on a college football team. Her father easily supported her brother though, so there was a clear bias due to gender. I wish that that divide would’ve been explored more extensively.

The way I see it, references to college women’s football teams could’ve been made as well. Or rather, should’ve been. It would’ve made more sense to consider why she wasn’t gunning for them. Also, there were no references to women who did get selected by men’s football teams in the past. Catching Jordan is a contemporary book, so some real life examples wouldn’t have been out of place in order to provide female footballers as her role models.

Suffice to say, I was pretty disappointed by Catching Jordan because I found it a tad too unbelievable, too annoying (on the romance front), and lacking severely on the sports front. Readers who like cute romance books set in high school probably wouldn’t be all too bothered by my gripes since I’m looking at this book from the perspective of a female athlete. That’s expected though since I’ve been into sports ever since I can remember.