Disclaimer: This is a spoiler-induced review of Insurgent. If you have not read it yet, you may want to read my review of the first book, Divergent instead. 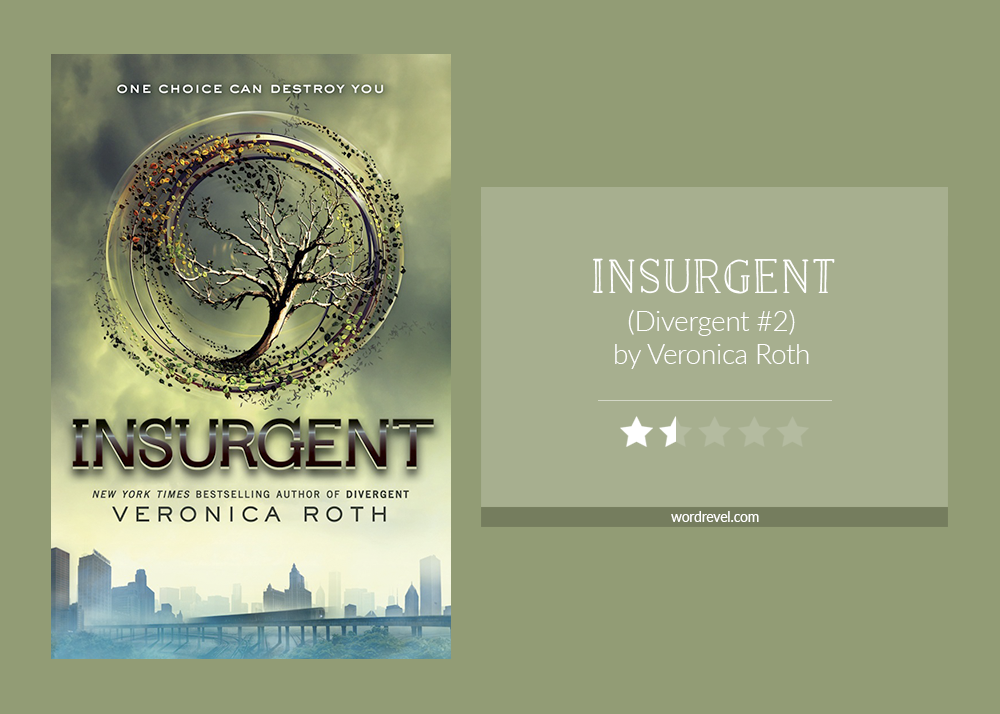 Tris has survived a brutal attack on her former home and family. But she has paid a terrible price. Wracked by grief and guilt, she becomes ever more reckless as she struggles to accept her new future.

Yet if Tris wants to uncover the truth about her world, she must be stronger than ever… because more shocking choices and sacrifices lie ahead.

What kept me going was knowing that Lillian and Sana were struggling through Insurgent with me. I know it’s sad but misery loves company. Besides, I’m determined to complete the series with Allegiant this month. I’ve never read it because I hate spoilers and got spoilt bad on that one.

After the decisive downfall of factions in Divergent, I couldn’t understand why factions still were such a significant part of Insurgent. Every little thing got pegged to factions, which made a lot of statements sound like the Divergent version of racism. Characters accusing one another for being such an Erudite, such a Candor, etc grew tiring. On the whole, using factions as an excuse for dispositions seemed lazy.

Arrogance is one of the flaws in Erudite heart—I know. It is often in mine. (p. 367)

So much for opposing the faction-system in the first book. Insurgent broke down so many things that were built up in Divergent. Questioning aptitude vis-à-vis factions became mere platitudes in this sequel. That didn’t line up with her demanding independent thought from fellow Dauntless refugees much earlier on:

To make matters worse, Four had a huge superiority complex that stemmed from being Divergent. For so long he had to suppress his true aptitude. Instead of recognising that and responding with humility, he thought himself better than everyone else.

He spits the words out bitterly. “I love Tris the Divergent, who makes decisions apart from faction-loyalty, who isn’t some faction archetype.” (p. 261)

Up to that point, all the book had been about was factions! They sought refuge with the Amity while being hunted by the Erudite and the Dauntless traitors. Tris measured herself against the factions, as did Four. Yet he got all high and mighty.

“You choose this moment to act like the Abnegation?” His voice fills the room and makes fear prickle in my chest. His anger seems too sudden. Too strange. “All that time you spent insisting that you were too selfish for them, and now, when your life is on the line, you’ve got to be a hero? What’s wrong with you? (p. 310)

No, my dear Tris, Four’s anger wasn’t sudden. He had been upset for a long time. In fact, he already lashed out fifty pages earlier, so I don’t see what’s so “sudden” about it.

What’s sudden was Four’s gallant declaration some time later, “You die, I die too.” (p. 338) Tris and Four were so distant from one another. For the most part they were upset and spent a good time not acknowledging each other. In spite of that, readers were supposed to believe in their romantic connection. In Divergent I could accept it because their connection built up over time. In Insurgent their relationship was as much of a wreck as the rest of the city.

Friendship that Wants You Dead

Another part that I could do without was Christina’s tantrums. I fully understand grief over losing someone dear. Christina lost her boyfriend, Will. She had every right to mourn. The reason I lost all sympathy was that she wouldn’t forgive Tris for killing him. She shot him as self-defence in Divergent.

Even if Tris had shot his hand to disarm him instead (as she retrospectively wished she had done), he would have found another way to kill her. That’s what the simulation had programmed him for. One of them was bound to die. Christina’s refusal to forgive, yearning for Will to have survived is as good as wishing for Tris to be dead. I’d rather have no friend than to be friends with someone who one day wishes me dead.

Despite my general misgivings towards Insurgent, my fascination with the simulations didn’t wane. Seeing how the Divergent would next manipulate the simulations offered some entertainment between the boring wastelands of Insurgent.

Besides the simulations, I was also glad for Peter. That’s not to say I liked him as a character but he sure was the most complex one with his multiple agent stunts for the sake of self-preservation.

On a somewhat unrelated note, I couldn’t help but wonder if Veronica Roth had been partially inspired by the Stanford Prison Experiment. At the end of Insurgent it became clear that this group of people had been set apart from the rest world.

People were put into factions (ie. given roles). While Edith Prior hoped for the best, the worst happened. Like guards and prisoners, they all had their place. Things got crazy when leaders became power-hungry and the suppressed sought to overthrow them.

Part of me thinks I might have enjoyed my re-read more if I had read Insurgent through that lens. Perhaps considering the power-relations would’ve given me a more intellectual reading. I don’t desire to find out though. I don’t ever plan on re-reading Insurgent again.