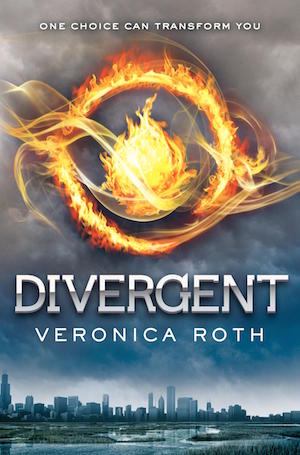 In Beatrice Prior’s dystopian Chicago world, society is divided into five factions, each dedicated to the cultivation of a particular virtue—Candor (the honest), Abnegation (the selfless), Dauntless (the brave), Amity (the peaceful), and Erudite (the intelligent). On an appointed day of every year, all sixteen-year-olds must select the faction to which they will devote the rest of their lives. For Beatrice, the decision is between staying with her family and being who she really is—she can’t have both. So she makes a choice that surprises everyone, including herself.

During the highly competitive initiation that follows, Beatrice renames herself Tris and struggles alongside her fellow initiates to live out the choice they have made. Together they must undergo extreme physical tests of endurance and intense psychological simulations, some with devastating consequences. As initiation transforms them all, Tris must determine who her friends really are—and where, exactly, a romance with a sometimes fascinating, sometimes exasperating boy fits into the life she's chosen. But Tris also has a secret, one she's kept hidden from everyone because she's been warned it can mean death. And as she discovers unrest and growing conflict that threaten to unravel her seemingly perfect society, she also learns that her secret might help her save those she loves... or it might destroy her.

The first time round I read Divergent in 2013, I devoured it. I loved it to bits. For most of my teen years I read contemporary fiction and to finally delve more into science fiction, specifically dystopian fiction, was exhilarating. Since then I’ve read more dystopian books, some of which impressed me more and some less. Also, this time round I tabbed the pages with post-it notes, annotated and cross-referenced. This close reading forced me to be more critical (in the analytical sense) as I read.

As I re-read Divergent, there were things I noticed that I didn’t the first time round or didn’t care so much about back then. Some things became clearer, which I appreciated. At the same time, I found the book not to be as packed after all, considering how thick it is. Maybe that’s also because I already knew the plot-points.

Not so Black and White

The factions in Divergent seemed to be very delineated, save for Divergents. Everyone had the gifts and callings according to the factions that they were in. Some might argue that that’s very simplistic and highly unrealistic of how the future of Chicago might look like. Well, Tris did question it too — very early at that.

“Faction customs dictate even idle behaviour and supersede individual preference. I doubt all Erudite want to study all the time, or that every Candor enjoys a lively debate, but they can’t defy the norms of their factions any more than I can.” (p.9)

This shows that while that was the structure of their society, it doesn’t mean that there was blind acceptance of it. It’s just that a societal structure isn’t so easily overturned, however little we agree with it. A modern day example would be the glass ceiling women face at the workplace. It’s ridiculous but it’s structurally embedded and takes time and will to break down.

Further evidence of the humanity of the initiates was the fact that adapting and assimilating into a new faction wasn’t easy. The Candor-born initiatives in Dauntless didn’t shut up on Day One. It took a lot of effort on their part, even when they succeeded.

“Peter’s green eyes harden. I’m surprised he can stop himself from responding, after speaking his mind all his life in Candor, but he does, his cheek red.” (p.77)

Nonetheless, the System was Rigid

Despite Tris’ questioning of the factions, the way everyone was sorted was extremely rigid. During her aptitude test Tris chose neither the knife nor the cheese. Yet for refusing the cheese, Amity was ruled out as her faction. Conversely, her refusal of the knife didn’t neutralise her apathy.

Logically, the way factions were determined didn’t make much sense to me as a result. I probably sat there for a good ten minutes trying to accept that Amity had been ruled out merely because of the cheese. Yes, it bothered me that much. The aptitude test didn’t allow for exceptions, although she did emerge Divergent: split factions among Dauntless, Erudite and Abnegation.

At least some of my misgivings were assuaged later in Divergent as Four declared, “‘The aptitude test tells you nothing.'” (p.327) Perhaps it didn’t have to make sense. It just had to make people believe in the system of factions.

Speaking of exceptions to the rule, remember that moment when Tris decided to climb up the Ferris wheel? She knew that in order to win their night challenge to capture the opposing team’s flag, they needed to go up high in order to see where the other team was. Her realization in light of Divergent was an Erudite trait. The execution however, was Dauntless. Thus Tris did display why she was special and that was not merely because the author made her the protagonist and therefore said so.

In fact, this view that Tris displayed Erudite qualities was validated some time later. Marlene told her, “‘Pretty smart of you. Like… Erudite smart.'” (p.155)

Veronica Roth paid attention to detail and built her world pretty solidly throughout. Even if I didn’t agree with all the logic, Divergent was consistent.

“I don’t see any elderly people in the crowd. Are there any old Dauntless? Do they not last long, or are they just sent away when the can’t jump off moving trains anymore?” (p.64)

At first glance this might just be seen as a passing thought. I certainly didn’t pay attention to this. Not until I was confronted with where the elderly did end up. It sickened me. When I re-read Divergent I noticed this obsercation and it made me ponder upon the suggestion that something wasn’t quite right even before Tris was fully initiated into her adopted faction, Dauntless.

Another instance where the foreshadowing only became clear to me while re-reading was the simulation serum. It was a pivotal ingredient to the plot and the first mention of it came as a semi-warning. Tris just didn’t know how grave the consequences would be when her mother first mentioned it to her.

“‘There’s something I want you to do,’ she says. I can’t go visit your brother, but you can, when initiation is over. So I want you to find him and to research the simulation serum. [emphasis added]” (p.187)

Amidst all the seriousness, there also was humour to be appreciate.

Oh, little did she know! I smirked when Four nicked her year with a knife. I’m sure that that did hurt, if only a little. It’s funny when you as a reader know something that the characters don’t. This is an instance that probably only sinks on during a re-read. I read that sentiment and knew that she was completely wrong.

At the beginning of Divergent Tris was fairly submissive in her actions. Despite her internal objections to various circumstances, she accepted this as an Abnegation should. Well, except she deflected factions. In any case, she became bolder over time, shedding that timid self that she initially portrayed. I noticed this change more so on my re-read because I wasn’t so swept up in the fast-paced action anymore and could stop to appreciate the finer details.

An Apple Doesn’t Fall Far from the Tree

Uncovering that Tris’ mother originated from Dauntless and was Divergent too made me appreciate yet another layer to the characterisations within Divergent. First Tris noted that her mother was too familiar with the Dauntless grounds when she visited Tris during they parents’ day. Later she learnt about her mother’s tattoo, something she had known nothing about growing up.

Eventually, her mother told her that she also was Divergent. This intricate bond that Tris had with her mother was strengthened through this affinity and understanding that surged between them. A mother always understand her daughter, even if her daughter doesn’t believe that.

Moments that Bothered Me

Insignificance of Four to Abnegation

Four was only two years older than Tris. He left Abnegation. That was a drastic move. I found it unbelievable that Tris didn’t recognize who he was. Least of all because Four was the son of Marcus, an Abnegation leader! Wouldn’t she have known as well that he left Abnegation for Dauntless? Indeed, she knew! Everyone in Abnegation knew and Marcus was receiving flak for it. Yet Four was this mysterious dude to Tris; an enigma to everyone as he mostly kept to himself. That’s pretty far-fetched, if you ask me.

Intimacy Not Natural to Tris

As an Abnegation-born person, Tris was visibly uncomfortable with public displays of affection. She turned away when she witnessed Edward and Myra kissing. She even waited form them to be scolded! Yet she seemed perfectly alright with physical contact between Four and her when it happened. There was no slow warm up, fingers grazing, blushing at that and growing bolder with each new touch. If there was, that’s a detail that’s been left out of Divergent. Such a shame since their relationship did grow slowly; just that the way too easy physical intimacy was problematic in light of Tris’ values.

One thing that bothered me and I couldn’t shake from the back of my mind was how big the Dauntless faction really was. “[Only] the top ten initiates [were] made members.” (p.71) In view of the missing elderly, the numbers just didn’t add up. Let’s say none of the Dauntless were around beyond the age of 35. That’s ca. 20 years’ worth of initiated members in their faction. If only ten make it, you’ve got ca. 200 Dauntless members at any given time. This in Chicago? I know, futuristic, but still. How small was this community that was supposedly alive?!

Part of me was sad was that I felt disconnected from Tris during my re-read. Usually I connect pretty easily to first-person narrators. While I absolutely adored Tris on my first read, I can’t say that after my re-read. Either way, she’s a great protagonist who shows strength, weakness, dominance, submission, and basically the complexity you’d expect from someone whose story you’re reading.

To close this mighty long discussion of Divergent, I leave you with my favourite quote:

“‘Who cares about pretty? I’m going for noticeable.” (Christina, p.87)

Are there any thoughts pertaining to Divergent that you’d like to discuss? Voice them in the comments below!