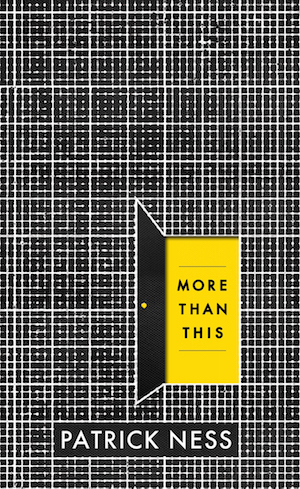 A boy named Seth drowns, desperate and alone in his final moments, losing his life as the pounding sea claims him. But then he wakes. He is naked, thirsty, starving. But alive. How is that possible? He remembers dying, his bones breaking, his skull dashed upon the rocks. So how is he here? And where is this place? It looks like the suburban English town where he lived as a child, before an unthinkable tragedy happened and his family moved to America. But the neighborhood around his old house is overgrown, covered in dust, and completely abandoned. What’s going on? And why is it that whenever he closes his eyes, he falls prey to vivid, agonizing memories that seem more real than the world around him? Seth begins a search for answers, hoping that he might not be alone, that this might not be the hell he fears it to be, that there might be more than just this…

When I was done reading, I felt gobsmacked. More Than This is utterly confusing. Not because it lacks clarity of thought or writing. No. Rather, because existentialist questions somehow can never be answered to the full satisfaction of anyone. Every answer inevitably leads to new questions.

If anyone were to ask me what More Than This is about, I’d say existentialism. Ness tackled really difficult questions in this book, not least of all, what if there is more to life than what we believe? Yet true to existentialist thought, with every answer that was given, a million more questions arose.

Very often when reading a book, I expect answers. I want to know how things end for the characters and how they ended up in whatever predicament in the first place. More Than This starts with a drowning boy. He dies. But what comes after? He thinks he has landed in some kind of hell — a very personal one, one of his own making at that. His dreams and memories torture him as he seeks answers.

It’s not a philosophical quest altogether though. More Than This, in many ways is very dark and has very grotesque portrayals of things I very much prefer not to imagine. Yet I couldn’t look away. From the very first page on which the boy was struggling in the water, his lungs begging for air, I could not turn away. The prose is raw but strong, and completely lured me into reading the entire book, no matter how disturbed I became at certain parts.

I Was Quickly Converted

Had I randomly come across this book in a bookstore or library, I might not have chosen to read it. Mostly because I wouldn’t have known what to make of the prologue. Right from the start, the subject matter does not fall in line with any of the books I tend to read.

However, I think that is the beauty of Ness’s language. It is powerful in imagery and in conveying exactly what a character thinks and feels, be it a complete sense of loss, or a hopefulness that is driven by desperation. He knows how to allow readers to experience something they have never felt before. Not knowing what to expect of More Than This can only enhance the reading experience.

Who Recommended More Than This

I picked up this book because of all the praise that Asti @ Oh, the Books! has for Patrick Ness. After finishing this book, I can totally understand why he is her favourite author and I don’t think anyone can go wrong in picking up More Than This to read.