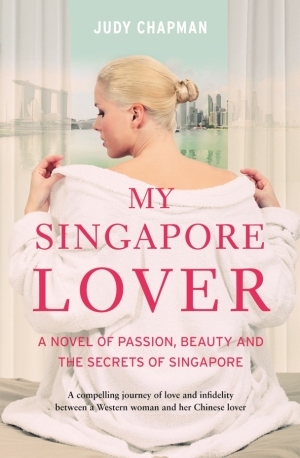 Young, Caucasian and single, Sara arrives in hot and sultry Singapore on a magazine assignment to detail the long-held attraction between western men and Asian women.

She soon becomes swept up in the exotic city, mesmerized by its glitter and glamour and seduced by promises of a career, wealth and success. However, a chance encounter followed by a charged love affair with a charismatic Chinese Singaporean hotelier, who just happens to be married, draws Sara into an unexpected inward journey that forces her to confront her past and contemplate the difference between love and infatuation.

Set in modern, glamorous Singapore, the Manhattan of Asia, this rapturous book is the story of one woman's journey of self-discovery, in which she explores her competing urges for corporate success and personal, spiritual happiness.

As with Eat, Pray, Love, popular Australian author Judy Chapman writes about finding soul and spirituality in unexpected places, and having the courage to follow the truth wherever that may lead.

I visited the library earlier today, fully determined to check out the Singapore collection. Faced with the fiction shelf of Singapore literature, this one bright blue spine popped out, so I took it from the shelf. Turns out it was My Singapore Lover. While I didn’t really know what it was about, I had seen copies of that book on display at bookstores. I thus started to read the book. 20 pages in, I already wanted to chuck it aside. Nothing really grabbed me but I didn’t want to make snap judgements. Plus, My Singapore Lover was published fairly recently, which I figured fits in squarely with Crazy Rich Asians, another book set in Singapore that was published last year. (I have yet to read it.)

Instead of returning it to the shelf, I grabbed a chair, sat down and read all the way to the end. When I was done, I wasn’t sure exactly how I felt. Initially I gave it a rating of 2.5 stars, which I kept reducing by half stars until I reached my final verdict of 1 star.

The prose was a tad simplistic. That surprised me because I don’t read all that much adult fiction. I read a lot of YA, so I somehow expected the prose to be more complex since this is an adult fiction book. It wasn’t. The book was set in first person present tense. I didn’t really think that that fit with the air of mystery that My Singapore Lover was supposed to convey. Also, the sentences were short. Two or three chapters were only made up of a single sentence. Stylistically, I thought that was a strange decision. There were a couple of grammar errors as well. The occasional attempt at poetic lyricism was contrived.

The prose contained a lot of repetition. I’m not sure what the aim of that was. I suppose in poetry repetition serves as an anchor, or as a means of emphasis. Trouble is, My Singapore Lover isn’t a poem and neither would I peg it for literary fiction. That’s why repetitions didn’t convey much meaning to me.

These are only a few quotes I pulled from the book. There were a few more. The only thing I could tell is that they divided the book into three parts, starting with gone, gone, gone, followed by high, high, high, then ending with falling, falling, falling. Oh and the author was obsessed with the term “scent”! It was slightly disturbing. Sara enjoyed the scent of this, and the scent of that, from the bedroom to restaurants, to wanting to know the scent of an orchid. Like I said, repetition without much evident reason.

The main issue I had was the blatant racism and even sexism. Stereotypical views of Orientalism seeped through the pages right from the start. The characters were caricatures. The loud and expressive Indian friend, contrasted with the demure, expressionless and infinitely mysterious Chinese woman. Yet, there were still overarching Asian traits to be found in both. At least according to the main character. Then again, she often slipped into using the terms Asian and Chinese interchangeably. Asia is bigger than that. There are so many different cultures that call Asia their home. There is no homogenous Asian to speak of in the way that My Singapore Lover would have readers think.

Racism spilled over into sexism, as ideas about Western women versus Asian women were perpetrated. Talk about why Western men prefer Asian women, and how Western women’s independence makes them more masculine, while Western men are headed in the “opposite” direction. Sure, some of these ideas were presented by pompous men who clearly were male chauvinists. Within the sphere of fiction, I can accept that because not every character is going to be likeable. What bothered me is that even though the main character noted that these were clichés and she was on a quest to find out how much truth there was to these dispositions, she didn’t actually set out to analyse her findings. She was a writer who wrote articles for magazines, so that’s the least I would’ve expected. I waited in vain because none of these issues were resolved.

Sara, the main character, was an expatriate, who took on a job at a Singaporean publishing house. Evidently, she had the eyes of an outsider. Her experiences would inevitably colour her perceptions of the city. She met a number of people embroiled in affairs, and soon enough engaged in an affair herself. It’s not surprising that she came across men who fetishised “Asian women” and wouldn’t want to “go back to Western women”. But to not question that?! That didn’t sit right with me.

Even worse, the Singaporean culture that she presented was a warped one. At one point, she claimed that extramarital affairs were acceptable and a normal part of life. If that were the case, the Media Development Authority of Singapore wouldn’t have banned access to the Ashley Madison site last year, where members can look for partners to engaged in extramarital affairs. In fact, acts of infidelity are fodder for headline news, so I fail to see how anyone might even conclude that it’s acceptable in Singapore.

It’s laughable that Sara kept mentioning the importance of family to Asians. That they wouldn’t deny their religion because it would upset their parents. That they wouldn’t marry someone their parents disapprove of. I don’t see how social acceptability of cheating fits with those values. They don’t. Of course, social values aside, people will cheat on their spouses. In Singapore, and elsewhere. That does not make it any more acceptable in Singapore.

Little things too made me wonder how much the author knew about Singapore. Chapman is Australian, so I was prepared to forgive minor details that were off but everything combined was just too much to bear. Take the dish chilli crab. It’s a favourite with the locals. According to Sara, the best chilli crab was served at this restaurant in town, called Crystal Jade. I nearly burst out laughing in the middle of the library. Crystal Jade Restaurant is more of a place for Chinese fine dining. Chilli crab is a dish best served in dedicated seafood restaurants.

The representation of Singapore and characters were reduced to Oriental stereotypes and were underlined so much by racism and sexism, the rest of the book hardly mattered anymore. In fact, I don’t think I need to go into Sara’s shallowness and obsession with her own beauty as well. That might just cause me to drive the rating down to half a star, or maybe even zero.