The most exciting thing that happened to me over the past two weeks was being able to watch the World University Floorball Championship 2014 finals yesterday! Watching the Swedish ladies and men, the Finnish ladies and the Swiss men battle it out for gold was super exciting. The ladies’ final especially was breath-taking as Finland managed to level with Sweden at 7-7, when they had been trailing by two goals for most of their match. In the end Sweden beat Finland on penalties though.

The men’s match was not any less exciting but it wasn’t as close. Sweden beat Switzerland 6-2. Although, Switzerland scoring the opening goal 29 seconds into the match did give Swiss supporters a glimpse of hope. Switzerland definitely put up a good fight, setting up several goal opportunities that left Sweden scrambling to defend against their worthy opponents.

After the match I also managed to get a photo with Swiss national player Kaspar Schmocker, before he had to run off for the prize presentation ceremony. That was definitely cool because I don’t usually go in for things like that. I prefer to stay out of crowd frenzies but since most people tried to get near the Swedish team, my friend convinced me to go over to the Swiss team. Their half wasn’t as crowded, so I obliged. Now I have my dear friend to thank for that frame-worthy shot. Hah.

So yeah, that was one of my floorball highlights. Would’ve been even cooler if I could’ve tried out for for a WUFC squad but in order to participate, players must be citizens of the countries they represent. Since my home country didn’t send a team, and I’m only a permanent resident of a country that did send one, I had no chance of gaining the privilege of competing at an international level. Thankfully being a spectator, and soaking up the whole atmosphere, was pretty exhilarating. 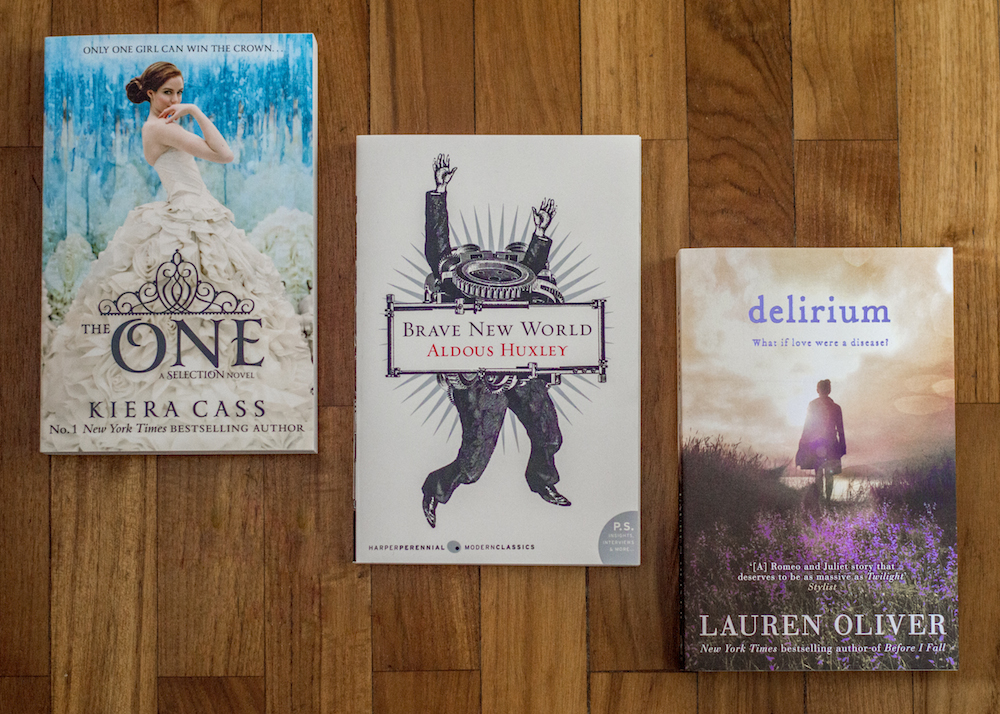 In other news, books! Yes, I received a few more book orders in the mail over the past two weeks. While I did get The One by Kiera Cass, I want to point out that I have not even read the first book in the trilogy. This means if you want to know if The Selection series is one that you should pick up, I’m not the right person to ask.

I also decided to buy a copy of Brave New World by Aldous Huxley because it’s a classic and my aim this year is to at least read a few classics. Brave New World seemed like a good place to start over, seeing how I’ve not progressed beyond the first act of Romeo and Juliet in months.

Lastly, I bought Delirium by Lauren Oliver. I actually meant to read the ebook since I didn’t like the original covers but when I saw the UK cover, I reconsidered and purchased that one after all. Besides, I’m so late to join the Delirium party, I don’t want to touch the library books anymore. They’re so tattered and worn out, I figured I’ll enjoy the series much better if I get to read my own pristine copies.

Exciting stuff happened on the blog this week as well. Dudette Reads is now Word Revel! I’ve been working on the layout and stuff over the past weeks, trying not to burst with excitement. The longer I sat on this project, the sooner I wanted it to be done. Originally I wanted it to be up in time for the first blogoversary but there were still some kinks left to iron out, so I delayed going live with Word Revel. Anyway, the time finally came when things were in order, and here we are! To celebrate the launch of Word Revel, I’m also hosting a Rafflecopter giveaway for a copy of Red Ink by Julie Mayhew (until 4th July, open internationally).

Working on Word Revel behind the scenes also explains my lack of recent blog posts and my huge delay in comment replies. I’m replying them in chunks, working myself forward from the older comments first. If I’ve not replied any of yours yet, rest assured that I will be up to date with replies in the coming week! In the mean time, know that I’ve read them all and appreciate anyone who reaches out to me on my blog.

Quote of the Week

I think it’s basic: if you find people you love, you want to be near them.
—Reagan, Open Road Summer by Emery Lord

This! It made me so happy that Reagan thinks this in reference to her best friend Dee. She compares romantic relationships with friendships, pointing out that friends often have known each other much longer than romantic partners. If romantic partners will do anything to be near each other, it’s only natural for friends to want to do that too. Love is an integral part of friendships, and it warms my heart whenever I’m reminded of that.

Has anything else exciting happened recently? Something I might have missed out on in the bookish world?