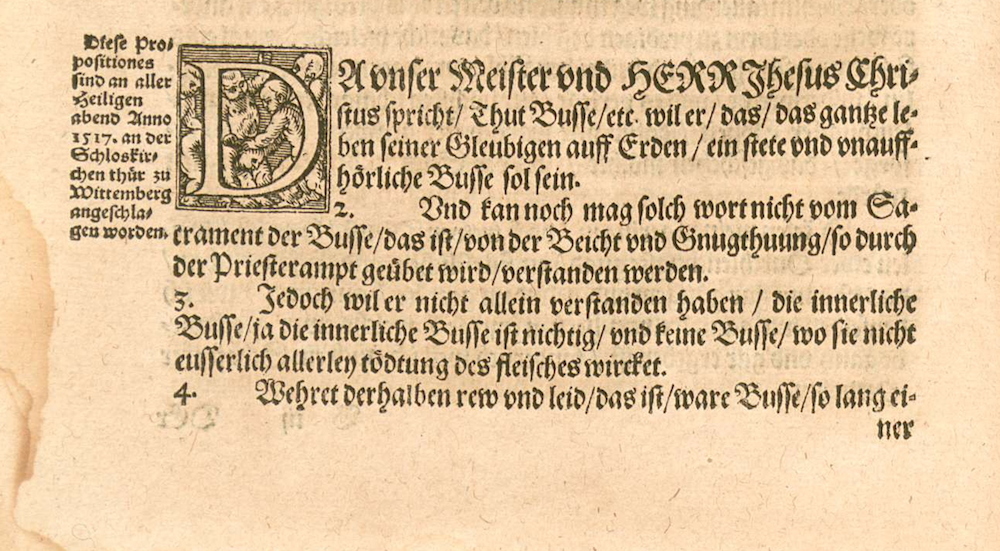 Reformation Day commemorates the beginning of the Protestant Church. This day was chosen because Martin Luther posted The Ninety-Five Theses on the Power and Efficacy of Indulgences (Originally in Latin, Disputatio pro declaratione virtutis indulgentiarum) on the door of the Castle Church in Wittenberg, Germany.

With the 95 Theses, Martin Luther sought to dispute a series of the practices of the Roman Catholic Church and so catalyzed the Protestant Reformation.

Religious Influences during my Childhood

Then in fifth grade, I attended a school with a very strong Lutheran tradition. There the entire school observed Reformation Day. Even students of different faiths had to be present.

Religion continued to feature strongly in my education through to seventh and eight grades during which I attended a school with an Anglican tradition. Reformation Day didn’t mean anything there but I continued to think of October 31 as Reformation Day because even though students from other schools had Halloween parties, nobody bothered about Halloween at my school.

Since religion has always been a huge part in my life, I thought I’ll not share books for Halloween. I’m not a fan of horror and paranormal books anyway. Instead, here are a few books with religious themes. They extend beyond Protestantism and encompass books about various faiths.

Converting Kate | My Best Friend, Maybe | Dancing in the Dark

Converting Kate by Beckie Weinheimer — This book is perfect for anyone who has ever questioned their faith and searched for answers about God and religion. Kate was an exceedingly relatable character and I felt that I truly got to know her through the book. I think anyone whose parents don’t share the same faith will also appreciate how much more difficult it can be to be raised in such a family because choosing a faith often always feels like expressing greater affection for one parent over the other. [My review]

My Best Friend, Maybe by Caela Carter — If there is one thing people fear, it’s people who are different. Two friends were driven apart years ago, then reunited because Sadie told Colette she missed her. Set in Greece, the backdrop to this story was breathtakingly beautiful. Religion, or rather religious fervour, had a huge impact on the trajectories of these two young ladies. [My quick thoughts]

I Hate I Love I Miss My Sister by Amélie Sarn — My heart was torn to shrewd when I finished reading the story of these two Muslim sisters who lived in France. One of them felt shackled to Islam and wanted to live a modern life while the other one grew so pious, she wanted to reject all worldly ways. Sadly, both were called to compromise because one was too Muslim and the other was not Muslim enough. But can we really be lukewarm when it comes to religion? But what is the cost of holding onto our principles. Based on a true account, I can’t recommend this book enough. [My review]

Faking Faith by Josie Bloss — Dylan developed a morbid fascination with fundamentalist Christian girls who blogged about their lives. The intersection between religion and the Internet was wonderfully presented in this book. It explored the longing to be part of something greater than ourselves and the curiosity of what it would be like to be a completely different person from who we really are. [My review]

The Opposite of Hallelujah by Anna Jarzab — Caro’s sister left their family and withdrew to a convent. Instead of accepting Hannah’s choice, Caro told people that her sister had died. Then Hannah returns. Caro resents her for it but in the course of the book, she learns things about her sister she hadn’t known. The relationship between sisters, grief and Catholicism are themes that were weaved together in a very moving way. [My review]

What does October 31 mean to you? How did you spend it this year? And do you have any other books with religious themes to recommend? I’d love to read more of those.