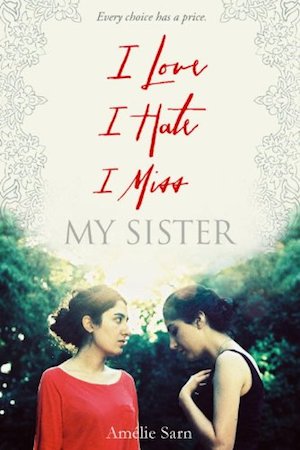 Eighteen-year-old Sohane loves no one more than her beautiful, carefree younger sister, Djelila. And she hates no one as much. The two have always shared everything. But now, Djelila is embracing her life as a secular teen, and Sohane is becoming more religious.

Every choice has a price.

When Sohane starts wearing a head scarf, her school insists that she remove it or she’ll be expelled. Meanwhile, Djelila is repeatedly harassed by neighborhood bullies for not following Muslim customs. Sohane can’t help thinking that Djelila deserves what she gets. She never could have imagined just how far things would go.

I love I hate I miss my sister.

In the year following Djelila’s tragic death, Sohane struggles with her feelings of loss and guilt, revealing a complex relationship between two sisters, each girl’s path to self-discovery, and the consequences they face for being true to themselves.

I Love I Hate I Miss My Sister arrived in the mail yesterday, just about a week after publication. When I had it in my hands, I did something I rarely do when a book arrives: read. Since I Love I Hate I Miss My Sister is such a short book, I decided to keep reading, thinking I might as well finish it one go. And finish it I did. I started reading at 10 p.m. and was done by 12.30 a.m. Just as well, since I pre-ordered it.

Reading this book horrified me. Partially because I couldn’t believe people can be this cruel, and partially because I know people this cruel do exist in this world. In fact, what makes I Love I Hate I Miss My Sister even more anguishing is that it’s based on a real event. It is based on the case of Sohane Benziane. View Spoiler »She was a French girl of Algerian descent who was murdered in 2002. « Hide Spoiler That thought alone sent chills down my spine and saddened me immensely. However, it’s not simply that knowledge that struck me. Amélie Sarn wrote a moving book from the perspective of Soharn, who lost her beloved sister Djelila.

I liked the contrast between Sohane and Djelila who each sought to freely express themselves and their beliefs. Even if they didn’t quite agree with each other, they supported each other in a way only sisters can. I Love I Hate I Miss My Sister is about the time after Djelila’s death and how Sohane comes to terms with her grief and her guilt. At the same time, I Love I Hate I Miss My Sister explores what it means to be Muslim and female in a secular society, especially in terms of outward expression.

Most journalists talk about what they do not know, about matters they don’t take the trouble to understand. They adopt the clichés that suit them—take one aspect of an issue until it becomes a caricature. To them, being a Muslim man means wanting to enslave women, to deny them any rights. I can’t say that this isn’t reality. But it’s only one reality among many—the one that is best known since it’s the one that gets the most media coverage.

Sohane’s voice rang through the pages. A lot of the prose is based on her train of thought. As the chapters alternate between past events and the present, a year after Djelila’s death, Sohane’s thoughts tend to lapse into thoughts addressing Djelila, as though she was still alive. The events mesh into each other, which to me accentuated Sohane’s grief. Even though I did wish that the writing was a little bit more complex, I Love I Hate I Miss My Sister left a definitive impact on me.