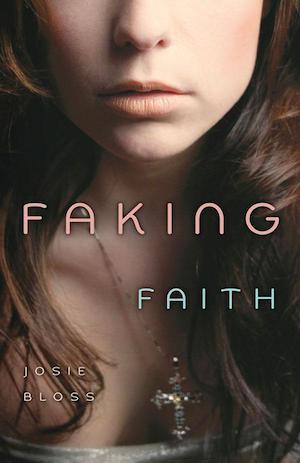 Thanks to a humiliating and painfully public sexting incident, Dylan has become the social pariah at her suburban Chicago high school. She's ignored by everyone–when she's not being taunted–and estranged from her two best friends. So when Dylan discovers the blogs of homeschooled fundamentalist Christian girls, she's immediately drawn into their fascinating world of hope chests, chaperoned courtships, and wifely submission.

Blogging as Faith, her devout and wholesome alter ego, Dylan befriends Abigail, the online group's queen bee. After staying with Abigail and her family for a few days, Dylan begins to grow closer to Abigail (and her intriguingly complicated older brother). Soon, Dylan is forced to choose: keep living a lie… or come clean and face the consequences.

Faking Faith dealt with themes that always fascinate me: religion and the Internet. Weaving them together in one book is practically a guarantee that I’ll read it. Thankfully Josie Bloss did not disappoint me with her book. There were some aspects that could’ve been developed better but as a whole, I did enjoy it, if only I needed to suspend my disbelief a little more than I usually expect to with Contemporary fiction.

Dylan had been completely cut off from her friends. Nobody wanted to talk to her. This meant that she had an awful lot of time on her hands. As expected, she spent a good deal of that time online. Eventually she stumbled upon some blogs of homeschooled fundamentalist Christian girls. Their lives couldn’t be any more different from Dylan’s. The more Dylan read, the more fascinated she became. After some time, lurking was no longer enough for her. She decided to keep her own blog. Except, she didn’t blog as Dylan. She took on an alter ego. Her alter ego was every bit as pious as these girls, striving to be that good Christian girl that her parents could be proud of and her siblings could look up to. Offline, she only had a brother who thought these girls were nuts and parents who had no interest in religion. Since Dylan had no friends to turn to anyway, she spent her time thinking up things that Faith could share with the blogging community in order to fit in with these girls.

What intrigued me about this premise was the extent to which people can pretend to be someone completely different on the Internet. It’s curious how long anyone can keep up such an online persona without anyone finding out who really sits behind the screen. Moral questions arose as well, as she lied to people not only about her identity but also about her beliefs. Dylan didn’t believe in God, and only looked upon practices of these fundamentalist Christians with morbid fascination. Conversion wasn’t on her mind when she started out blogging. Yet she developed a friendship with one of these girls who truly believed Faith was for real.

Even though I obviously disagree with Dylan’s actions, I was very much taken in by Faking Faith. Online subcultures and resultant relationships can be rather ambiguous. Terms like IRL (in real life) float around, indicating that maybe the online world isn’t real. But to bloggers it is. Bloggers after all, are real people, they just extend their lives into virtual spaces. So while taking on the identity of Faith might not have been a big deal to Dylan when she got into it, to the other girls, I wagered, that discovery could be a major blow. And so I kept waiting for exactly that to happen. But along the way Faking Faith managed to evade my expectations as the plot developed surfaced. Events that were clearly stupid unfolded and yet they came to be very eye-opening to Dylan. That’s why despite some of the plot holes, on a grand scheme, I appreciated Faking Faith for the larger themes.