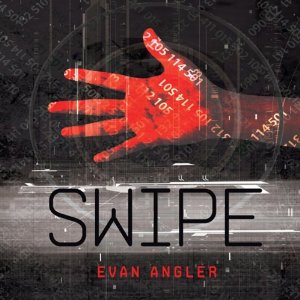 Logan Langly is just months away from his 13th birthday and the biggest day of his life – the day he will finally be marked. The mark lets people get jobs, use public transportation, or even buy concert tickets. Becoming marked means becoming free – or so he is told. Five years ago when Logan's sister went to get her mark, she never came back. Now Logan can't shake the feeling he's being watched… And then he finds the wire.

Swipe didn’t really grip me until the last two or three chapters. The world building was impeccable throughout the book but I wasn’t sure where the plot was going until the book was almost over.

The characters didn’t impress me much either. I’m not sure if that’s because they were on the younger YA side or because I couldn’t see how exactly they fit together in the story.

The strength of Swipe lies in the world building. Set in the distant future, where the United States has dissolved into the American Union, following the States War, things are different. For one, every child goes through the rite of passage to officially be recognised as part of society. They go through the Pledge when they are 13 and receive the Mark on their wrist.

Rather then bogging readers down with details of all the science, Angler incorporated the details and elements in the story. He did it so artfully, I could imagine exactly what life was like in the A.U.

What didn’t work so well for me were the narration and the plot. The narrator sounded exceedingly bored, which in turn bored me. He did come up with voices for the different characters, which injected some life but still, his dragging voice didn’t engage me as much as I would have liked.

Plot-wise, it took a long time to figure out where Swipe was headed. At first things seemed pretty aimless. All I knew was that Logan had lost his sister, Lily, when he was 8 years old and it was her turn to receive the Mark. She never returned. That’s why he feared his Marking day. All the extra events that led up to his Marking day somewhat went over my head.

Better Suited for a Movie

Still, things did get sorted out in Swipe and I was so impressed by the whole set-up, I do plan to continue with the series. On the other hand, maybe I would’ve found Swipe a whole lote more exciting as a movie. The setting is elaborate enough to build a set worthy of the A.U. You’ll see what I mean if you check out the book trailer of Swipe:

Also, maybe I would’ve enjoyed the audiobook more if the boy who did the voice-over for the book trailer would’ve also been the one to narrate the audiobook. I’ll probably read Sneak (Swipe #2), rather than listen to the audiobook.