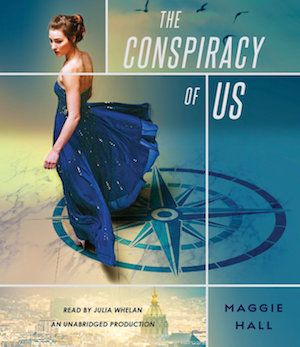 Avery West’s newfound family can shut down Prada when they want to shop in peace, and can just as easily order a bombing when they want to start a war. Part of a powerful and dangerous secret society called the Circle, they believe Avery is the key to an ancient prophecy. Some want to use her as a pawn. Some want her dead.

To unravel the mystery putting her life in danger, Avery must follow a trail of clues from the monuments of Paris to the back alleys of Istanbul with two boys who work for the Circle—beautiful, volatile Stellan and mysterious, magnetic Jack. But as the clues expose a stunning conspiracy that might plunge the world into World War 3, she discovers that both boys are hiding secrets of their own. Now she will have to choose not only between freedom and family–but between the boy who might help her save the world, and the one she’s falling in love with.

If I had to sum up The Conspiracy of Us in two words, I’d say, fun mystery. That’s exactly what it is. It’s a crime mystery that takes you from Minnesota to Paris to Istanbul. It hits hard where it has to in terms of inevitable violence. I say inevitable because that’s what villains in crime novels do — they resort to violence. As much as it is a mystery book, it doesn’t stray too close to thriller territories, so if you’re the squeamish kind, you need not worry.

Listening to the audiobook was loads of fun because The Conspiracy of Us was chock-full of action yet retained a touch of light-heartedness. It was almost as if the narrator was removed from the scenes to watch over herself and narrate. For an audiobook, it was a fitting approach. High intensity books require a lot more concentration than I could muster when I traded an Audible credit for the audiobook.

Not the Deepest Book

Now, with the slight detachment of the first-person narrator that Avery was, clearly she could’ve done with a bit more depth. The same applies to every other character in the book. Then again, that might’ve slowed down the light-hearted fast pace that The Conspiracy of Us had going. In the end, it didn’t bother me too much because the plot kept steamrolling forward.

What did slow the pace down a little was the romance. It had no place in the developments of the book, if you ask me. It came off as forced. Kinda like a product placement in a TV show. If it’s out of place it becomes glaringly obvious that the product was forced onto the producers. The romance was akin to that for me because it didn’t belong. It’s as though it was there to be able to tick it on the checklist of elements that have to be in a YA novel. Thankfully, it wasn’t such a huge deal in this first book in the series and I hope it won’t be either in the sequel that follows The Conspiracy of Us.

Overall, Julia Whelan is a very good narrator. It’s no wonder that she’s the voice of a lot of audiobooks. I lost track of how many audiobooks of hers I’ve listened to. The amazing thing is that she manages to sound different enough without sounding fake. That’s a huge deal to me because I have trouble with recurring narrators who give the same voice to different characters.

One tiny problem I had was the mispronunciation of French words. As great as her French accent is of spoken English, her pronunciation of actual French words was off. There weren’t that many phrases to begin with, so I do think the onus was on her to find out how to speak those words. Other than that, I won’t hesitate to recommend listening to the audiobook of The Conspiracy of Us over reading it on the page.