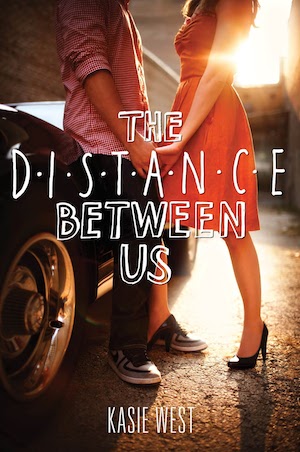 The Distance Between Us by Kasie West • contains 312 pages • published 2. July 2013 by HarperTeen • classified as Contemporary, Romance, Young Adult • obtained through Overdrive • read as eBook • shelve on Goodreads

Seventeen-year-old Caymen Meyers studies the rich like her own personal science experiment, and after years of observation she’s pretty sure they’re only good for one thing—spending money on useless stuff, like the porcelain dolls in her mother’s shop.

So when Xander Spence walks into the store to pick up a doll for his grandmother, it only takes one glance for Caymen to figure out he’s oozing rich. Despite his charming ways and that he’s one of the first people who actually gets her, she’s smart enough to know his interest won’t last. Because if there’s one thing she’s learned from her mother’s warnings, it’s that the rich have a short attention span. But Xander keeps coming around, despite her best efforts to scare him off. And much to her dismay, she's beginning to enjoy his company.

She knows her mom can’t find out—she wouldn’t approve. She’d much rather Caymen hang out with the local rocker who hasn’t been raised by money. But just when Xander’s attention and loyalty are about to convince Caymen that being rich isn’t a character flaw, she finds out that money is a much bigger part of their relationship than she’d ever realized. And that Xander’s not the only one she should’ve been worried about.

It happened! I like a book precisely because of the romance. Of course there’re other factors involved but The Distance Between Us swept me off my feet. It was sweet, good light-hearted fun reading this book. I found so many reasons to laugh from the beginning right through to the end, which I loved. I like books that make me laugh. They’re such stress-relievers and wonderful distractions.

To be fair, my expectations were fairly low, so I was blown away quite easily. The Distance Between Us has such a cheesy cover, I thought I’d be rolling my eyes a lot. I tend to do that when things get kitschy. Point is, I would never have chosen this book for myself. I only read it because Olena picked it for our August Epic Recs, so I wasn’t inclined to deny. Well, this is stark reminder that recommendations are wonderful when you discover books you otherwise wouldn’t have.

Romance aside, I loved Caymen. She was witty and extremely fluent in sarcasm. Just my kind of girl. She wasn’t mean about it but she didn’t attempt to explain herself either. Sometimes her comments bordered on inappropriate, which could be very awkward for her yet very hilarious for readers. It was refreshing because sarcasm is such an important art form. Sadly, it doesn’t always translate itself well into the written word. Kasie West however, managed to do that and that worked in her favour.

What struck me about The Distance Between Us was how Kasie West dealt with economic class. When you come from a privileged economic background, it’s often easy to dismiss the hardship of others. Caymen was raised in a single-parent family and had been helping out in her mother’s doll store for years. It was her way of life and as much as she dreamt about going to college one day, her priority was keeping her mother and herself afloat.

I think it’s good that The Distance Between Us didn’t shy away from money matters. Some people are uncomfortable talking about money but at the end of the day, money matters to all of us in one way or another. In a way, I think this elevated to realistic factor for me and that is something that I care about when I read contemporary books. I want to be able to believe the characters and circumstances, even though they’re fictitious. Suspension of disbelief isn’t a staple in contemporary fiction—characters, their actions, problems and reactions are what matter.

In terms of plot, I wish some things would have been clearer at the end but overall, I was thoroughly entertained by The Distance Between Us. At the same time, there were things to think about as The Distance Between Us portrayed a curious encounter between two people from social classes that were worlds apart.