Disclosure: I received a review copy of The Hate U Give from Pansing Books, a regional distributor, in exchange for an honest review. This does not affect my opinion of the book or the content of my review. 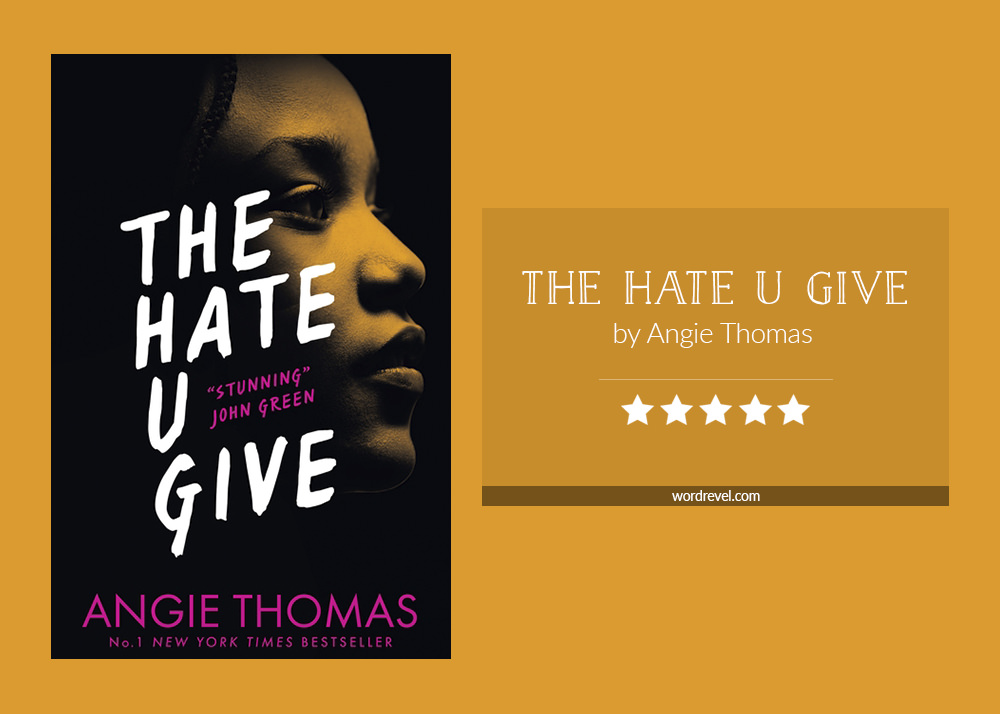 The Hate U Give by Angie Thomas • contains 448 pages • published April 6, 2017 by Walker Books • classified as Contemporary, Young Adult • obtained through Pansing Books • read as ARC • shelve on Goodreads

Sixteen-year-old Starr lives in two worlds: the poor neighbourhood where she was born and raised and her posh high school in the suburbs. The uneasy balance between them is shattered when Starr is the only witness to the fatal shooting of her unarmed best friend, Khalil, by a police officer. Now what Starr says could destroy her community. It could also get her killed. Inspired by the Black Lives Matter movement, this is a powerful and gripping YA novel about one girl's struggle for justice.

No contest, The Hate U Give is the best young adult novel that was published in 2017. It’s filled with heart and soul, takes an honest look at racial discrimination, and doesn’t hold back any punches. It’s so honest and raw that it hurts to read and it’s precisely because of that that everyone and anyone, young or old, needs to read The Hate U Give.

Racism exists on many levels, and people experience it differently around the world every single day. For some, the level of prejudice could cost their lives. Angie Thomas took police violence against Black people under scrutiny. This is why I can’t exactly say that I loved The Hate U Give. It’s based on true accounts, even if fictionalised.

The Hate U Give elucidated the plight of Black people living in the USA. It showed why they might feel powerless and why they learn to protect themselves and to obey law enforcement when they’re still children. It portrayed experiences that aren’t uncommon for them yet might be foreign to many of us. It highlighted the urgency of the #BlackLivesMatter movement.

What I can say about The Hate U Give is that I was impressed. The prose was solid, evoking thought and emotion in the reader throughout. The writing was clear with words chosen very precisely to tell this story with great impact.

Since I live outside of the USA and my local vernacular is markedly different, it took me a while to ease into the way the main character narrated the story, and the way the characters spoke. Still, I’m glad for it. Language is part of culture, and Starr’s culture was apparent.

At the end of The Hate U Give, I felt as though I had met all the characters in person. Starr’s family in particular, left a deep mark on me. Her parents were present and influential in Starr’s life, as was her uncle. Her younger brother’s antics often made me smile despite myself. As for her elder half-brother, I appreciated the struggles he faced as he was torn between Starr’s family and that of his mother, as well as how Starr navigated sharing a half-brother with her best friend.

Overall, every character directly involved in the plot had a backstory. Some were explicitly laid out, while others were woven into the narration. That brought out motivations really well.

What also surprised me (in a good way) was that even though The Hate U Give was written from the first-person point-of-view, there was a balanced portrayal of the victim and the perpetrator. The victim wasn’t idealised through the eyes of Starr, allowing readers to see him for the human being that had been. At the same time, media representations and accounts from the “other side” were offered up, challenging readers to weigh perspectives

Be Sure to Read THUG

The Hate U Give is such an important book focussed on current affairs. We can’t shy away from difficult topics such as these and shouldn’t turn a blind eye to discrimination, especially when violence is involved and lives are at stake. At the same time, The Hate U Give is a call and reminder to speak out against racism.