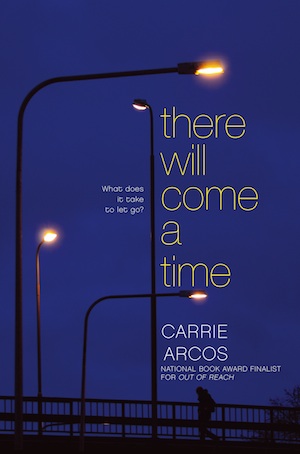 There Will Come a Time by Carrie Arcos • contains 315 pages • published 15. April 2014 by Simon Pulse • classified as Contemporary, Young Adult • obtained through library • read as hardcover • shelve on Goodreads

Mark knows grief. Ever since the accident that killed his twin sister, Grace, the only time he feels at peace is when he visits the bridge on which she died. Comfort is fleeting, but it’s almost within reach when he’s standing on the wrong side of the suicide bars. Almost.

Grace’s best friend, Hanna, says she understands what he’s going through. But she doesn’t. She can’t. It’s not just the enormity of his loss. As her twin, Mark should have known Grace as well as he knows himself. Yet when he reads her journal, it’s as if he didn’t know her at all.

As a way to remember Grace, Hanna convinces Mark to complete Grace’s bucket list from her journal. Mark’s sadness, anger, and his growing feelings for Hannah threaten to overwhelm him. But Mark can’t back out. He made a promise to honor Grace—and it’s his one chance to set things right.

There Will Come a Time was such a great book for me. I know it’s supposed to be a very sad book as it deals with the the loss of a twin in a car crash. For what it’s worth though, I enjoyed There Will Come a Time very much. It was so moving due to the emotions that were palpable throughout the book.

Told from Mark’s point-of-view, There Will Come a Time pulled me right into the tumultuous state of mind that Mark was in. He missed his twin sister Grace and it was evident in everything he did, said and thought. The detachment that Mark experienced from people accentuated the pain and the grief of this 17-year-old boy.

Mark wasn’t the only one who lost Grace though, and Grace’s best friend Hanna wouldn’t let him forget. She reminded him that he didn’t own grief. She lost Grace too. Still, he was convinced that nobody could understand the pain that he was in. She was his twin, so he strongly believed that the connection between them was incomparable.

Nonetheless, Mark allowed Hanna to share his grief, leading them to forge a kind of friendship they hadn’t had before. He was there for Hanna the way Grace would’ve been. She joined Mark and his best friend Sebastian the way Grace would’ve joined them. They became each other’s lifelines to the point that when they discovered Grace’s bucket list, they decided to work through it together to honour Grace.

The memories Mark had of Grace were so vivid, it was easy to forget sometimes that Grace wasn’t actually part of the book. Grace was dead. Everything that was said about Grace was through other characters. Yet Grace came alive between the pages of There Will Come a Time, just as all the other characters did. The relationship that Mark and Grace had was especially well documented through Mark’s memories.

We couldn’t read each other’s minds, though it wasn’t for lack of trying. When we were kids, we’d sometimes practice for hours, staring at each other, flinging our thoughts across the room, but it never worked. But I did know how Grace thought. I knew how she felt. I knew how she’d answer questions, how she only liked nuts in ice cream and not in cookies.

One thing that particularly stood out to me was the depth of conversations Mark and Hanna came to have. The more time they spent together, the more they talked about things that mattered to them.

Hanna pauses at the door. “You really don’t think someone would jump out of a plane to save a girl?”
I shrug. “Call me a realist.”
“Even if he loved her?”
“That kind of love takes years,” I say. “It doesn’t happen in a couple hours.”