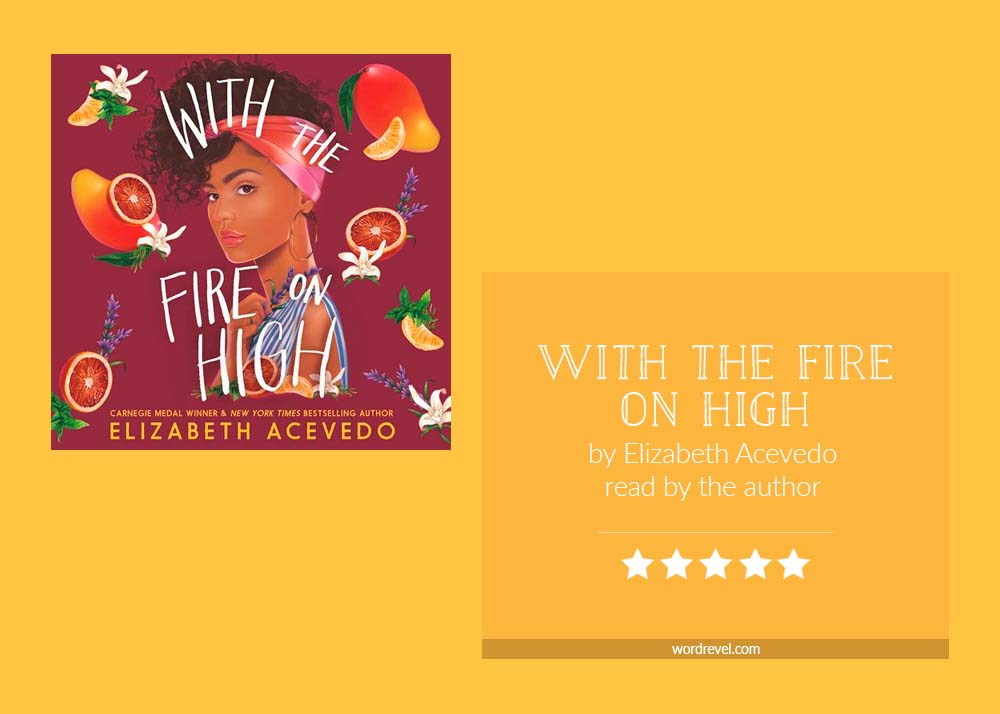 Ever since she got pregnant freshman year, Emoni Santiago's life has been about making the tough decisions—doing what has to be done for her daughter and her abuela. The one place she can let all that go is in the kitchen, where she adds a little something magical to everything she cooks, turning her food into straight-up goodness.

Even though she dreams of working as a chef after she graduates, Emoni knows that it's not worth her time to pursue the impossible. Yet despite the rules she thinks she has to play by, once Emoni starts cooking, her only choice is to let her talent break free.

With the Fire on High easily is one of my favourite books that I read this year. Emoni loves to cook and dreams of becoming a chef. That’s all I needed to know in order to borrow the audiobook. With the Fire on High offers so much more than a trope I can’t get enough of, though. It brings to light complicated relationships, the difficulty of balancing responsibilities and ambitions, and a huge dash of heart.

Synopsis aside, I really enjoyed Elizabeth Acevedo’s poetic flair in her debut novel, The Poet X. That’s why I became a fan of her writing. She raised the stakes for me with Clap When You Land, so I had high expectations for With the Fire on High. I was not disappointed. Even though she wrote this in prose, I still liked the writing style. This was underscored because of Acevedo’s narration of the audiobook. She brought Emoni and her emotions to life so well that I actually missed listening to the audiobook days after I was done.

One voice that I’ve not come across a lot in audiobooks over the past two decades is that of teen mothers. If teen pregnancies came up, they usually focussed on the regrets of the characters, and the backlash of their families and communities. Of course, that is a reality pregnant teenagers do tend to contend with but what happens after that? What happens when the baby is born and the mother tries to get her life back on track?

Acevedo kept things real and messy in this book all while offering readers hope. She didn’t shy away from the relationship with Emoni’s ex-boyfriend and father to the baby. They shared custody but were still minors too. That meant Emoni also had to contend with his parents who didn’t like her. At the same time, she had her own family problems to deal with. Since the death of her mother, her father had left her in the care of her grandmother. Trying to reconcile the absence of her own parents with her determination to be everything she could be to her own daughter wasn’t easy. Although, it presented a huge opportunity for growth, and I appreciated the journey.

In order to ease her grandmother’s financial burden, Emoni worked after school. It was extremely tough on her to keep up with school, raise her child, keep down her job, and be there for her best friend. That juggling act was a stark reminder that people aren’t just students, just employees, just mothers, just a single identity. They make up the sum of the whole, and With the Fire on High did a great job of encompassing the whole person that Emoni was.

Speaking of identities, Emoni was Afro-Latina. Her cultures were woven beautifully into the plot as well as into the food. Truly, this book made me almost taste dishes I’d never even heard of. Although, I do plan on looking up recipes to try making some of these myself as well. So, maybe hold off reading this book when you’re hungry but beyond that, be sure to pick it up!