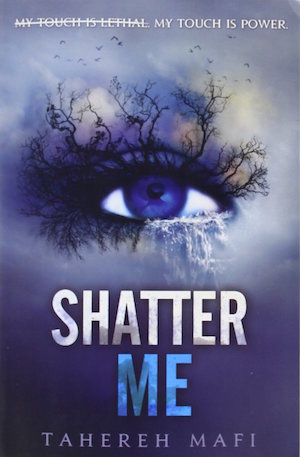 The last time she did, it was an accident, but The Reestablishment locked her up for murder. No one knows why Juliette’s touch is fatal. As long as she doesn’t hurt anyone else, no one really cares. The world is too busy crumbling to pieces to pay attention to a 17-year-old girl. Diseases are destroying the population, food is hard to find, birds don’t fly anymore, and the clouds are the wrong color.

The Reestablishment said their way was the only way to fix things, so they threw Juliette in a cell. Now so many people are dead that the survivors are whispering war – and The Reestablishment has changed its mind. Maybe Juliette is more than a tortured soul stuffed into a poisonous body. Maybe she’s exactly what they need right now.

Juliette has to make a choice: Be a weapon. Or be a warrior.

You know those books that you add to your TBR pile for no apparent reason, except that the cover looks cool? Shatter Me was one of those books for me.

I hadn’t read the synopsis or remotely any reviews. I knew zilch until Lillian told me that it was one of those books that solicited a lot of mixed reactions due to purple prose and excessive metaphors. I couldn’t wrap my mind around a dystopian book written like that. I had to read the book straight away to find out for myself.

That prose truly was different and unexpected. Readers get sucked right into the mind of someone committed to a psychiatric ward and wow! was that mind all over the place. Stylistically what sets Shatter Me apart is that some phrases and sentences have been struck out. It was distracting at first but after a while I got used to it.

Those struck out sentences reflected very well the thoughts that Juliette was mentally censoring. Thoughts that she would never willingly share with anyone. This to me is the most realistic portrayal on paper of how our minds work. We think things and then try to unthink them, wondering why we would think those things, chiding ourselves even. That’s what those struck out sentences were to me — the rawest possible thoughts.

I think this stylistic choice best demonstrates the creativity of Tahereh Mafi more so than the setting, plot or characters themselves. Coupled with the (indeed excessive) metaphors, Shatter Me is a book that won’t please everyone but for anyone who’s open to experimental writing, Shatter Me could be quite a treat.

On the dystopia front, I thought Shatter Me was lacking a little. It was so consumed in romance sometimes, I wanted to skip over those parts to get back to the mess that was their world with their brutal regime.

The premise itself of Juliette’s lethal touch already held intrigue, so I didn’t see the need to spice things up so much with romance. Though I suppose it is thrilling to see how romance holds up for someone whose mere touch can kill.

Nonetheless, the elements all came together very well in Shatter Me. Mafi took great care to let us know the state of the world environmentally, socially and politically. All these aspects are important in portraying a dystopian world, so I ended up believing that things really were dire and oppressive with a rather bleak future.

Yet what most shone through for me in the end was the state of Juliette’s mind. Throughout the book I was trying to figure out who she was and how she came to be the way she was. She had an obsession with numbers and had difficulty relating to people. Were those indicators of her mental instability? Was there more to her than her physical capabilities?

Despite her self-pitying ways, Juliette had many layers to her that I enjoyed dissecting as I read Shatter Me. So while it was nothing like what I expected when I first considered reading it, Shatter Me turned out to be a worthy read.