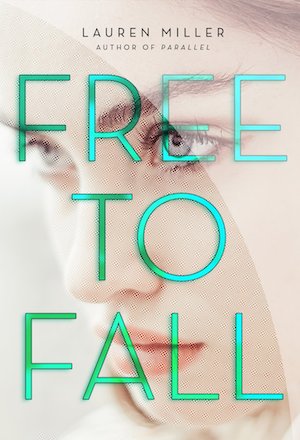 What if there was an app that told you what song to listen to, what coffee to order, who to date, even what to do with your life—an app that could ensure your complete and utter happiness?

What if you never had to fail or make a wrong choice?

What if you never had to fall?

Fast-forward to a time when Apple and Google have been replaced by Gnosis, a monolith corporation that has developed the most life-changing technology to ever hit the market: Lux, an app that flawlessly optimizes decision making for the best personal results.

Just like everyone else, sixteen-year-old Rory Vaughn knows the key to a happy, healthy life is following what Lux recommends. When she’s accepted to the elite boarding school Theden Academy, her future happiness seems all the more assured. But once on campus, something feels wrong beneath the polished surface of her prestigious dream school.

Then she meets North, a handsome townie who doesn’t use Lux, and begins to fall for him and his outsider way of life. Soon, Rory is going against Lux’s recommendations, listening instead to the inner voice that everyone has been taught to ignore — a choice that leads her to uncover a truth neither she nor the world ever saw coming.

As I sit down here to review Free to Fall, my mind is till completely lost in Angelfall by Susan Ee, which I finished listening to only a while ago. No matter, I took down notes as I read Free to Fall, and sometimes impressions after a few weeks give a much better idea of the impact of a book.

What struck me about Free to Fall was Lauren Miller’s painting of the world where everyone was completely dependent on their phones. She pushed the envelops of complete dependence where smartphones not only were considered information technology but they were also used as decision making devices. Lux, as these phones were known, (kinda like Siri on iPhone, just more advanced) would make mundane decisions about which drink to order at a coffeeshop as well as important decisions, such as which courses to enrol for in school

The premise was relevant to me because the influence of smartphones on society is one that surely occupies the minds of many, including mine. I like that Miller took that idea and spun a story out of it, set in the early 2030s. The science behind the book does carry some plausibility and the consequences are terrifying.

Even today when I think about Free to Fall, I shudder about the possibilities of the near future. Such technology already exists today. It’s only a matter of how much more it will develop and how quickly. The thing about technology is that it’s not inherently evil. What matters is who uses it how and for what purpose. I think Free to Fall demonstrated that tenuous relationship to technology very well.

Sadly, the premise can only carry a book so far. What matters too is the plot. This is where Free to Fall didn’t grip me all that much. The first half of the book made me turn the pages as I sought to know what would happen next. Rory ended up at a boarding school and ended up embroiled in a secret society. I like conspiracies in books as much as the next person. However, the second half of the book didn’t manage to deliver as much anymore on the mystery front.

I didn’t connect all that much to the characters. Perhaps the reduced ability to make decisions flattens characters and reduces their appeal to me. I like independent characters. Someone who depends on a handheld device to decide whether to take the next step with the left or the right foot is severely inhibited on that front.

Either way, despite the blandness in half the characters, Rory was alright and she did meet some interesting friends while at boarding school who knew how to exert their own will.