Disclaimer: This is a spoiler-induced review of Lola and the Boy Next Door. There also might be slight spoilers for Anna and the French Kiss. If you have read neither, proceed with caution, or do not proceed at all. You have been warned. 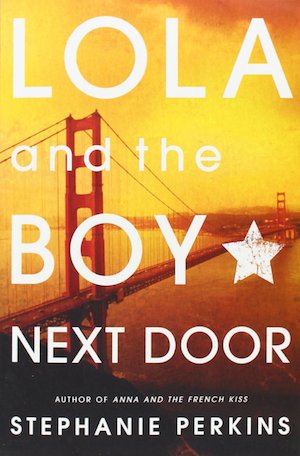 Lola and the Boy Next Door (Anna and the French Kiss #2) by Stephanie Perkins • contains 384 pages • published 29. September 2011 by Dutton Books • classified as Contemporary, Romance, Young Adult • obtained through Overdrive • read as eBook • shelve on Goodreads

Lola Nolan is a budding costume designer, and for her, the more outrageous, sparkly, and fun the outfit, the better. And everything is pretty perfect in her life (right down to her hot rocker boyfriend) until the Bell twins, Calliope and Cricket, return to the negihborhood. When Cricket, a gifted inventor, steps out from his twin sister's shadow and back into Lola's life, she must finally reconcile a lifetime of feelings for the boy next door.

What do you make of a book that everyone has already loved to shreds? How do you pick up those pieces and see what others saw before you? Hype has a way of bringing awareness to certain books. At the same time, it can negatively impact one’s enjoyment. Without the hype I wouldn’t have loved Lola and the Boy Next Door. With the hype, I came to feel indifferent.

Lola was as quirky as others had promised me. Her clothes were nothing short of elaborate. The colourful wigs surely drew everyone’s attention to her. The constant reference to her get-ups though felt a little gimmicky after a while. It was as though her appearance mattered more than her character. Then again, she lived to sew and was proud of her skill, so I suppose the references to her clothes did establish her pride in it.

On the Brinks of Cheating

Are love triangles recipes to legitimise cheating in fiction? I’m starting to think so. Lola and Max were in a relationship when Cricket Bell and his family moved back into the neighbouring house. Calliope’s ice skating career pretty much dictated where her family lived and Cricket did all he could to support his twin sister. At first Lola was averse to their return because Calliope was hostile towards her and Cricket had hurt her before the Bells moved the last time round.

As much as Lola tried to avoid the Bells, Cricket tried to get Lola’s attention, hoping for them to be friends again. Cricket, who had been very shy in the past, also finally overcame his aversion to expressing his feelings. He manned up and told Lola he cared for her deeply. Could’ve been a sweet moment if Max hadn’t been around to overhear it all. Awkward. Of course Lola then had to introduce her boyfriend.

Technicalities of Not Cheating

Boyfriend established, Cricket should have backed off. For the most part he did. Yet they continued being friends. He was more careful around her and avoided any sort of physical contact. Very laudable. Then one night he ended up in her bedroom and she attempted to kiss him. He bailed. Once again, very cool of him but seriously, any lovelorn guy who builds a bridge from his bedroom to the bedroom of a girl with his closet door was surely hoping for things to happen. Uh-hmmm…

So, Lola didn’t cheat outright but that is mostly to the credit of Cricket.

Still, she decided to come clean and break up with Max. Guess whose advice she was acting on? Étienne St. Clair of all people. He told her he had been in a similar situation with Anna and the most important thing would be for Lola to be honest with herself. With that, I find St. Clair lost all potential of redeeming himself for his cheating ways.

Anyway, Lola eventually decided to break up with Max. Things got messy, he accused her of cheating, she accused him of not trusting her. They had a shouting match. In the end, he told her to get out. So was it mutual? Or did he break up with her? Actually, didn’t she initiate it? Yeah, things get blurry like that during break-ups.

Naturally, Lola and Max said things to each other, wanting to be as hurtful as possible. Lola rationalised her reasons for wanting to end things with Max. In her mind, she opposed him calling her Lolita, she took issue with the way he treated her best friend.

Interestingly, his demeanour toward Lindsey wasn’t a concern for Lola until Cricket was in the picture. When things are rosy, things like that can get shoved aside. Since Lola was looking for reasons to end things with Max, everything about him grated her.

I’m not a sadist but in the case of Lola and the Boy Next Door, I sadly thought the break-up was the most genuine moment throughout the book. It was presented in a way that wasn’t too tame and also not too over the top. It was believable in a manner that made me want to reach out to Lola.

Besides the colourful wigs, elaborate clothes and careful make-up, I don’t think I got to know Lola as a character. Maybe that was the point but consequently, her character development eluded me. Her (ex-)boyfriend, Max, called her out on it a few times, noting that she always dressed up such that she constantly was in a costume. Then when she was her plain self, she was lying.

Eventually she came to embrace herself as someone who loves putting a lot of thought and effort into her appearance. All fine and dandy but what about her personhood?

Even though I didn’t like Anna much in Anna and the French Kiss, I surprisingly liked seeing her reappear in Lola’s life together with St. Clair. People’s paths overlap all the time, so seeing them from different perspectives in fiction can be a lot of fun.

I didn’t care much for her. She knew she was in the wrong all along. I liked that she was the better person and apologised to Max towards the end of Lola and the Boy Next Door for the things that she had done to him. Other than that, her larger than life appearances didn’t translate into a complete character for me.

The one person I did have sympathy for was Cricket. He was a shy boy who was so used to being in Calliope’s shadow, he kept his feelings towards Lola for a long time. Then when he tried so hard to be a good friend to Lola without overstepping his boundaries, I couldn’t help but root for him. I would’ve rooted for him, regardless of whom he liked because he was oh so sweet.

Turns out Calliope was intensely jealous of Lola. Her twin looked up to someone else and Calliope hadn’t been able to handle it since they were little children. Fortunately for her, Lola did come round in the end, and Calliope left us readers on a positive note after the two of them made up.

Lindsey was a loyal friend who also had her own mind and life. Instead of taking on all of Lola’s enemies, she gave Calliope a chance and hung out with her and Cricket as friends. She discovered that Calliope could actually be a nice person and Lindsey did not hesitate to tell Lola so.

Below that bad boy rocker image five years older than Lola, he did care for her—that much was evident. Every Sunday he had to subject himself to the scrutiny of Lola’s parents over brunch.

I’m reminded of what Max said ages ago, about how much worse it was dealing with two protective fathers.

Yes, she had two fathers because her mother gave her up for adoption. Lola’s uncle and his husband thus legally became her fathers. Max put up with two extremely protective fathers who disliked him with a passion. Staying out of sight wasn’t an option, yet he stuck around anyway for Lola.

Of course everything he did or said started being cast in a bad light when Lola wanted him out of her life and was pining after Cricket. Given that the narrative was from the first person, the perspective was a biased one. Max never had a chance. Then again, he indeed was vindictive once their relationship spiralled out of control.

Lola’s fathers were strict with Lola in a way that reminded me of my own parents. When I was 17, I had to call my mum all the time to update her about my whereabouts as well. I couldn’t help but derive some glee out of seeing someone else navigating strict parents. Either way, Andy and Nathan weren’t just side characters. Lola also related what they were like and what they did through the story, which really tied her family together as a unit.

Norah caused a lot of stress in Lola’s life merely because she existed. Her fathers had to clean up after Norah’s drunken nights and directionless life. In Lola and the Boy Next Door, Norah managed to get herself evicted, such that she ended up living with them. Her brother couldn’t have it any other way, even if he tried.

When it came to Norah, there was quite a character development, even though she was an adult and a side character. There even was a moment between Lola and Norah that showed that they did have a bond between them, however tenuous.