Disclaimer: There are spoilers for the first book in the series, Cinder. If you have not read it yet, you might want to check out that review instead. 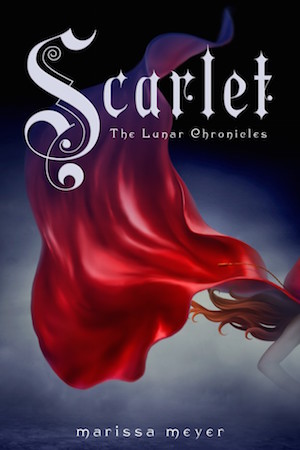 Cinder, the cyborg mechanic, returns in the second thrilling installment of the bestselling Lunar Chronicles. She's trying to break out of prison — even though if she succeeds, she'll be the Commonwealth's most wanted fugitive.

Halfway around the world, Scarlet Benoit's grandmother is missing. It turns out there are many things Scarlet doesn't know about her grandmother or the grave danger she has lived in her whole life. When Scarlet encounters Wolf, a street fighter who may have information as to her grandmother's whereabouts, she is loath to trust this stranger, but is inexplicably drawn to him, and he to her. As Scarlet and Wolf unravel one mystery, they encounter another when they meet Cinder. Now, all of them must stay one step ahead of the vicious Lunar Queen Levana, who will do anything for the handsome Prince Kai to become her husband, her king, her prisoner.

Little Red Riding Hood doesn’t count among my favourite fairy tales. In fact, I have no fondness for it at all. That’s why I was hesitant about about reading Scarlet when I found out that the retelling was based on that fairy tale. Amazingly, I thoroughly loved Scarlet — even more so than Cinder.

Scarlet had so much going for it, there never was a boring moment. I quickly got used to the alternating settings between France and China as Scarlet was introduced while Cinder remained a permanent fixture. Even though they were so far apart, they each were central to the grand narrative of The Lunar Chronicles.

What stood out to me and made me love Scarlet so much was the complexity that could be found in Wolf. He was mysterious and weird. I mean, he didn’t know what tomatoes were! He had an air of danger about him that wasn’t built on pretences and I wanted to know why that was.

The initial encounters between Scarlet and Wolf were so ominous too because at the back of my mind, I kept thinking of the big bad wolf from Little Read Riding Hood, that I kept holding my breath, waiting for Scarlet to kill him. Eventually though, I let go of all my knowledge of original fairy tales because Scarlet was so engaging in it sown right, it stood on its own as its own futuristic fairy tale.

Meanwhile, Cinder continued to be a fixture in the second book of the series. Part of me wishes that there would’ve been more of her, especially after she won a special place in my heart last year. In any case, the focus was on Scarlet, so Cinder took somewhat of a backseat until her paths crossed with Scarlet. That’s when both carried equal weight again.

On the whole, I think Marissa Meyer found a great balance among all the characters involved, from Scarlet to Cinder and even among the secondary characters who didn’t feel all too secondary at all. Wolf, Kai and Thorne were all so well developed, I couldn’t get enough of Scarlet. It’s so important for all characters to have substance and I found Scarlet to be a stellar example of that.

Scarlet was so wonderful, that my initial reservations ebbed away so quickly, I can’t even remember the degree of apprehension that I had felt with regards to Scarlet.