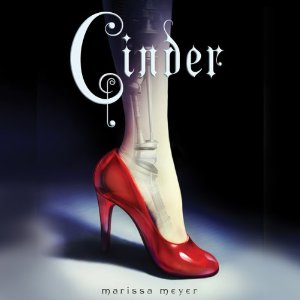 Humans and androids crowd the raucous streets of New Beijing. A deadly plague ravages the population. From space, a ruthless lunar people watch, waiting to make their move. No one knows that Earth’s fate hinges on one girl…

Cinder, a gifted mechanic, is a cyborg. She’s a second-class citizen with a mysterious past, reviled by her stepmother and blamed for her stepsister’s illness. But when her life becomes intertwined with the handsome Prince Kai’s, she suddenly finds herself at the center of an intergalactic struggle, and a forbidden attraction. Caught between duty and freedom, loyalty and betrayal, she must uncover secrets about her past in order to protect her world’s future.

Cinder wasn’t technically on the list of books I wanted to read. Sure, I had seen bloggers rave about The Lunar Chronicles but somehow I let all that excitement pass me by. Big mistake! Cinder was wonderful! Thankfully it was a Kindle Daily Deal last year around the time Cress came out. I decided to buy it then. A few months later I wanted to listen to an audiobook and saw that I could get the audiobook of Cinder for a significantly reduced price because I had bought the Kindle version.

I’m so glad the audio version of Cinder lured me into the world of The Lunar Chronicles. Prior to this series, I hadn’t read any fairy tale retellings. I liked the idea of them but didn’t know where to begin. Cinder was such a great entry point, I’m determined to look for more. Recently, this also led me to listen to Cruel Beauty, which I acquired through SYNC but it wasn’t a priority on my TBR list either.

What intrigued me most about Cinder was the collision of fantasy and science fiction. As much as these two genres are often lumped together as sci-fi/fantasy, they have their own characteristics. Marissa Meyer blurred those lines in a clever way. I mean, cyborgs, androids, lunar people, technology, kingdoms, enchantments, a queen who had taken the throne by killing the rightful heir? So much to love!

Elements of Cinderella within a New Story

A lof elements in Cinder were based on Cinderella. That’s the whole point of fairy tale retellings. I enjoyed the familiarity that the story brought with it. Marissa Meyer made good use of archetypal characters, yet there were many fresh elements as well. I’m sure there are more books about cyborgs out there but Cinder is the first that I read. Inevitably then, this concept was new to me in fiction. I also loved Cinder’s best friend, Iko. Iko was an android with personality. While the reality of cyborgs and androids might be terrifying on some levels, in fiction, Marissa Meyer made them very loveable.

Chinese Culture was Lost in Translation

Cinder was set in New Beijing. For now, that’s basically Beijing in China. It’s kinda cool that The Lunar Chronicles have such a global setting with heads of states from around the world communicating about things that impacted the entire world but the main setting was in New Beijing. I knew that in theory but in the execution of the book, that wasn’t evident. The name of the city could’ve been a made-up name and nobody would’ve been able to draw the parallel to a Chinese city. There were a few Chinese terms thrown in for good measure but that wasn’t enough, in my opinion.

The names also hardly showed Chinese influences. Linh is a Vietnamese surname. The Chinese transliteration should’ve been Lin. At least Linh Cinder’s name was partially explained by the fact that Cinder had been adopted. Kaito and Iko are names of Japanese origin, not Chinese.

Even though China wasn’t technically China anymore because the Commonwealth combined most of Asia, I expected that at least some names in New Beijing, save for the name Beijing itself, would’ve been Chinese. Instead, Japanese names took over together with an odd combination of other influences.

As for Nainsi (pronounced Nancy by the narrator), I can’t even determine what language that was supposed to represent. I’m fairly certain that no syllable in Mandarin remotely sounds like “nain” or anything similar to it. Oh and there was Linh Adri too. The origin of her given name is Indian but there was not indication that Adri’s mother might have been Indian.

This entire mixture of names didn’t convince me much because Chinese culture as a whole has been around for thousands of years, so I can’t see it disappear entirely, even in a futuristic China.

Caught up in The Lunar Chronicles

Since I didn’t read Cinder with the intention of reading a book set in China, I was mostly able to look past my cultural gripes. On the whole, I enjoyed Cinder very much and as of today, I’ve already finished Scarlet and am in the midst of enjoying Cress.