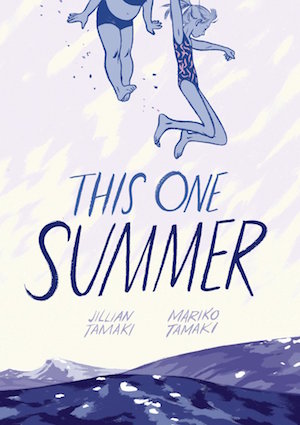 Every summer, Rose goes with her mom and dad to a lake house in Awago Beach. It's their getaway, their refuge. Rosie's friend Windy is always there, too, like the little sister she never had. But this summer is different. Rose's mom and dad won't stop fighting, and when Rose and Windy seek a distraction from the drama, they find themselves with a whole new set of problems. One of the local teens — just a couple of years older than Rose and Windy — is caught up in something bad… Something life threatening.

It's a summer of secrets, and sorrow, and growing up, and it's a good thing Rose and Windy have each other.

This One Summer is a tremendously exciting new teen graphic novel from two creators with true literary clout. Cousins Mariko and Jillian Tamaki, the team behind Skim, have collaborated on this gorgeous, heartbreaking, and ultimately hopeful story about a girl on the cusp of childhood — a story of renewal and revelation.

Flip open This One Summer and you’ll be greeted by beautiful graphics. They’re art pieces in and of themselves. The illustrations are set in monotone though rather than black ink, dark blue has been chosen. This adds softness to the images fitting for the contemporary summer setting of this graphic novel. I could stare at the pages over and over again, allowing my eyes to feast upon the beauty. Sadly, that’s all that my two stars are for.

Technically there is a story in This One Summer. Things do happen but the plot is so flat and the characters are so bland, I was bored reading. The pace was off too. Yes, it was slow, which should’ve fit in well with the laid-backfamily summer vacation but it felt jarring instead. I was waiting for the high point of the plot. In the end, I knew what should’ve been the high point but really, the lead up to it didn’t grip me. Even the twists that should’ve been shocking failed to disturb me in any way. I was indifferent to the characters. They remained 2D on the pages and never came alive in my imagination.

I’m not usually one to talk about all the potential that a book didn’t live up to. If it didn’t live up to it, then maybe it didn’t have all the potential and was just a combination of good ideas without good execution. Here’s the thing, This One Summer did have the elements for a good contemporary story. What’s more inviting than a summer home? It calls for laziness and laziness invites adventure when you go seeking for it. These girls did go out of their way to look for trouble. The trouble just never really took off.

Then there’s Rose’s mother. Something was up with her. That should’ve become more than clear when Rose’s parents started fighting. Rose even noticed that something was wrong but didn’t pursue it. She remained self-absorbed. Instead of pulling the threads to unravel everything and build the suspense, everything was just hanging there, waiting until it was too late and the conclusion was very quietly reached at the end.

Ultimately, This One Summer wasn’t a book found myself caring much about. I saw mighty pretty pictures with little substance.