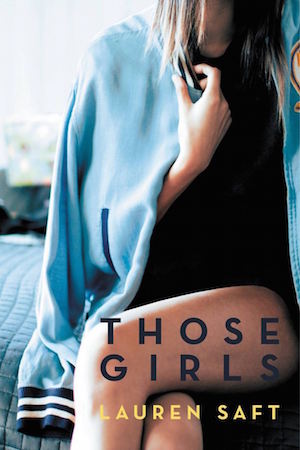 Some girls will always have your back, and some girls can't help but stab you in it.

Junior year, the suburbs of Philadelphia. Alex, Mollie and Veronica are those girls: They're the best of friends and the party girls of the school. But how well does everybody know them-and really, how well do they know one another? Alex is secretly in love with the boy next door and has joined a band-without telling anyone. Mollie suffers from a popular (and possibly sociopathic) boyfriend and a serious mean streak. And Veronica just wants to be loved-literally, figuratively, physically...she's not particular. Will this be the year that bonds them forever or tears them apart for good?

In a debut novel that is raw, honest, hilarious, and thought-provoking, Lauren Saft masterfully conveys what goes on in the mind of a teenage girl and how often even the closest of friends walk the thin line between love and hate.

There are so many reasons to hate Those Girls. Yet when I step away from the content and simply think about the structure of Those Girls as a novel, it actually holds up pretty well. This is why I think Lauren Saft has what it takes to become a successful author but I don’t have it in me to like this book much.

What is Those Girls About?

I went into this book expecting to read about the complexity of friendship. Turns out it’s more about frenemies. (This term alone already makes me cringe.) What these girls have is not friendship. They are backstabbing deceitful liars who gossip about one another in the worst possible way behind their backs.

Language-wise, what bothered me is that they could so liberally call each other “whore” to their faces and behind their backs.

“Fine then, whore. I’m just trying to help.” And I pushed my notes over to her so she could copy them.

Now, I get that some friends think it’s perfectly fine to call each other “bitches” and the likes but that’s not an example of “healthy dose of heart” at all. It’s degrading to women and doesn’t portray any form of healthy relationships. There weren’t even any contrasting examples of friends who treated each other with respect.

Negating the YA Classification

For some reason Those Girls is being marketed as a young adult book. Given the amount of sex, drugs, alcohol and profanity I prefer to mark it as new adult. Maybe it’s a cultural difference in upbringing but where I grew up, this book would’ve completely shocked me at the age of 16.

What might make a lot of readers uncomfortable is the acceptance of immorality as the norm. That put me off a fair bit.

The characters and their actions were questionable from the beginning right through to the end of Those Girls. When that happens, in the very least I look for the victims and hope to empathise with them. This time round I spared my empathy because the victims were culprits of similar calibre. They fully deserved each other, though I would never wish such sorry friends upon anyone.

Despite my discomfort and rage towards the characters, their actions and the course of events, I think Lauren Saft wrote her story well. Sure, I was incredulous at it all but I wouldn’t be surprised if somehow somewhere things like that did happen in reality. Worse things happen in the news each day. Which leads me to wonder, if we already read so many terrible things in the news, do we really want to read those things in our novels too?

Plus, when it comes to movies, the more we hate a villain, the more we attribute it to good acting. If a generally nice actor can garner so much hate, the acting was great. To some degree I would apply this principle to Those Girls as well. I hated every last character in the book. Ok, maybe not Josh but he was a naïve bystander — though I do think that he forgives too easily.

Despite my vehement disagreements, I did keep reading till the end, didn’t I? Occasionally I asked myself if I could keep going. Sometimes I thought, No, this is too much. Yet I kept reading because I was curious how much worse things could get. Thus in my review of Those Girls, I tried not to let my disgust mar my overall analysis of the book.

The characters after all were believable, if a little shallow. I would’ve liked to know more of their motivations beyond their selfishness. Inner conflicts did surface as they questioned their own actions before pursuing them. Things went crazy, which is splendid for plot-progression, although there was very little evident change from the before to the after. I didn’t expect any of them to become saints but surely they must have been affected and become different people from who they were before.