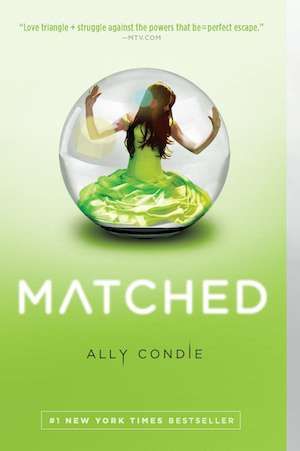 Cassia has always trusted the Society to make the right choices for her: what to read, what to watch, what to believe.

So when Xander's face appears on-screen at her Matching ceremony, Cassia knows he is her ideal mate... until she sees Ky Markham's face flash for an instant before the screen fades to black. The Society tells her it's a glitch, a rare malfunction, and that she should focus on the happy life she's destined to lead with Xander.

But Cassia can't stop thinking about Ky, and as they slowly fall in love, Cassia begins to doubt the Society's infallibility and is faced with an impossible choice: between Xander and Ky, between the only life she's known and a path that no one else has dared to follow.

Matched was a fairly mellow book for a dystopian fiction. In fact, it started off with a markedly utopia society in which peace reigned. Cassia looked forward to her Matching ceremony, where she would meet her Match. She fully trusted the Society to determine her ideal partner whom she would marry four years later, when they were 21 years old.

She was nervous yet extremely excited before the ceremony. Her best friend, Xander, was the picture of calm. When it came to the ceremony and they learnt that they were they had been matched, they were ecstatic. A perfect ending right at the beginning of the book, no?

The Utopia that Wasn’t

Alas, cracks started to show. These mistakes that Cassia encountered gave her a lot to think about and reasons to question the system. Rather than lose control and try to stage a rebellion though, Cassia continued to live her life. We learn about her position in the Society and what her future might hold. We learn how things operated and the equality that the Society strived for.

The Society truly was a utopian setting. Hardly anyone died of diseases like cancer or had to live with dementia. The quality of life was kept at an optimum for everyone. Matching was integral to the Society to ensure healthy offspring. Everything was controlled thanks to advanced scientific knowledge. Even the food intake was tailored to each individual and excess was curbed.

For all the love that Cassia had for Xander, she still allowed Ky into her life. She knew Xander was a match and she should be thankful because rarely did anyone already know their Match from childhood. But when she discovered Ky as an alternate Match for her, she became curious about him.

Ky also noticed Cassia and they fast became friends. Ky fascinated her because he was different. She wanted to know more about him and his story and she enjoyed his company.

Strangely, I didn’t mind the love triangle in Matched. Perhaps because the synopsis already pointed towards it, so I expected the plot to be heavily reliant on it. Besides, we’re often curious about the What if? Naturally Cassia was intrigued and I felt it all fit together.

So, action. Action is important for dystopian fiction, no? Well, Matched is not necessarily the book for that. Like I said, it was surprisingly mellow. Kind of like a contemporary plot thrown into a world of science fiction.

Only towards the last third of the book did the action start to unfold. Even then, I think Matched didn’t contain a lot of it. If anything, I’d expect things to get more intense in the second book, Crossed.

Personally, I liked the change of pace that Matched offered. It wasn’t set in our times and so was removed from our daily lived experiences. Readers who turn to books for escape but aren’t in the mood for a high intensity-driven book might enjoy reading Matched.

The voice of the narrator sounded a bit young for a 17-year-old. I would’ve pegged her more as 14 or 15. It took me a while to get used to it. Anyway, I since alternated between the book to read and the audiobook to listen, I can confidently say that she fit the role of Cassia well. In the end, I did enjoy listening to the audiobook.